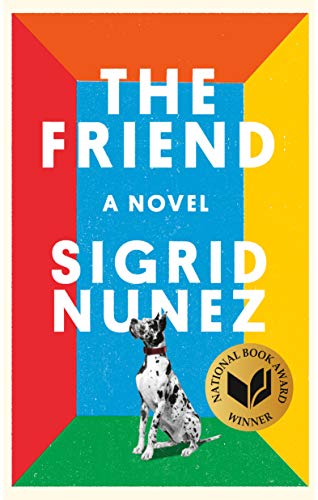 The 2018 National Book Award winners were announced tonight in New York City. The big prize for Fiction went to The Friend by Sigrid Nunez.

For the 69th Awards ceremony, host Nick Offerman‘s opening remarks were rife with innuendo and earnest musings on the importance of literature. In a nod to the night’s finalists, Offerman remarked that this year’s finalists including five debut authors and 10 titles published by independent presses. About the newly added category “Translated Literature,” Offerman quipped: “Suck on that, Muslim ban.”

The award in the Young People’s Literature category went to The Poet X by Elizabeth Acevedo. The inaugural award for Translated Literature went to The Emissary by Yoko Tawada; translated by Margaret Mitsutani (Bonus: Tawada’s 2017 Year in Reading). The Poetry award was won by Justin Phillip Reed for Indecency. The Nonfiction award went to The New Negro: The Life of Alain Locke by Jeffrey C. Stewart.

Bonus Links: Earlier in the year we dove into both the Shortlist and the Longlist to share excerpts and reviews where available.
The Millions' future depends on your support. Become a member today.

The IMPAC Award shortlist was announced today. The IMPAC sets itself apart with its unique approach. Its massive longlist is compiled by libraries all over the world before being whittled down by judges. This makes for a more egalitarian selection. It’s also got a long lead time. Books up for the current prize (to be named June 13th) were all published in 2010, putting the IMPAC more than a year behind other big literary awards. There’s a distinct upside in this. By now, nearly all the shortlisted books are available in paperback in the U.S. The IMPAC also tends to be interesting for the breadth of books it considers.This year’s shortlist is typically eclectic, representing several countries and ranging from bestsellers to relative unknowns.Rocks in the Belly by Jon BauerThe Matter With Morris by David BergenA Visit from the Goon Squad by Jennifer Egan – (excerpt, Egan’s Year in Reading, The Millions profile of Egan, A Millions Hall of Famer)The Memory of Love by Aminatta Forna (excerpt)Even the Dogs by Jon McGregorMatterhorn by Karl Marlantes (our review, excerpt)Landed by Tim PearsLimassol by Yishai SaridThe Eternal Son by Cristovão TezzaLean on Pete by Willy Vlautin (excerpt)

The IMPAC shortlist is in. If you don’t know about the IMPAC, it’s very unique prize with a very long longlist. The longlist is composed of nominees from over 150 libraries around the world. Those picks are then whittled down to a shortlist via a panel of judges. As you’ll see from the shortlist, since the process leading up to this award takes so long, some of the books aren’t exactly new. I think involving libraries makes the IMPAC unique compared to a lot of other awards out there. It seems a lot more egalitarian than, say, the Booker or the National Book Award, and I appreciate the international flavor as well. That’s why I included it in my prizewinners post last year. There’s more info about the award at the IMPAC site. Now, here’s the shortlist with some comments:Graceland by Chris Abani – This book about Nigeria was nominated by a library in Sweeden. – excerptMaps For Lost Lovers by Nadeem Aslam was an LBC nominee – we wrote about it for five posts sarting with this one. Another example of the multiculturalism of the IMPAC: this book about Pakistanis living in England was nominated by libraries in Belgium and South Africa. – excerptHavoc in Its Third Year by Ronan Bennett – I’ve been wanting to read this book ever since I first heard about it. Was read and loved at Book World. – excerptsThe Closed Circle by Jonathan Coe – excerptAn Altered Light by Jens Christian Grondahl – excerptBreaking the Tongue by Vyvyane LohDon’t Move by Margaret Mazzantini – excerptThe Swallows of Kabul by Yasmina Khadra – excerptThe Master by Colm Toibin – excerptThe Logogryph by Thomas Wharton