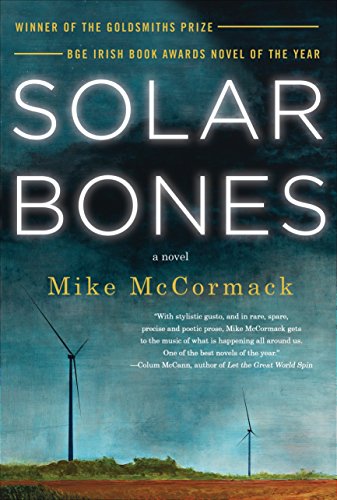 McCormack is the fourth Irish author to take home the award and €100,000 prize. The novel, which was also longlisted for the Man Booker, was chosen from 150 titles nominated by libraries in 111 cities across 37 countries.

Solar Bones is about All Souls’ Day—which, in Ireland, is when the dead are said to return. About the book, the 2018 judging panel said: “Formally ambitious, stylistically dauntless and linguistically spirited, Solar Bones is a novel of extraordinary assurance and scope.”

Bonus links: check out who made the International DUBLIN Literary Award shortlist.

Sometimes it seems like all there is to write about is book awards. The National Book Awards are handed out, but wait, here are the Whitbread finalists. The Whitbread, Britain’s second most prestigious prize after the Booker, is, it seems to me, at a disadvantage. Since the Whitbread comes out only a couple of months after the Booker, the selections are compared in the press. If the Whitbread too closely mirrors the Booker, it loses some of its punch, but if the judges pick a shortlist with no overlap with the Booker, the Whitbread is criticized for being too obscure. This year, the only overlap with the Booker is that they have both shortlisted Ali Smith’s The Accidental. As was much remarked when the Booker list was announced, many well-known authors have books out this year: Kazuo Ishiguro, Ian McEwan, Zadie Smith and Julian Barnes, among others. None of those made the Whitbread list, a fact that seems likely to have prompted head judge Philippa Gregory’s defensive sounding remark in the Guardian: “Our shortlist may confuse the book trade. We are not saying these are the only good books. They are books which happened to resonate powerfully with the judges of the moment.” The list does include two notable names: Salman Rushdie for Shalimar the Clown and Nick Hornby for A Long Way Down. Rounding out the fiction list is Cotton by Christopher Wilson (which, since it is going by a different title in England, has been much misrepresented in the press, as the Literary Saloon points out.) For the finalists in all the categories, visit the Whitbread site.

Book award season is peaking along with the autumn leaves as the National Book Award shortlists have been released in four categories. These have been whittled down from last month’s longlists, and the winners will be announced in New York City on November 19.

As we mentioned when she landed on the longlist, one of the fiction finalists will be especially familiar to Millions readers. Emily St. John Mandel, whose Station Eleven has been winning high praise, has been a staff writer for us since 2009. We’ll again point you to her first piece for us: “Working the Double Shift” examined how many writers must write as a “second career” while a day job pays the bills.

You read about nearly all of the books on the Fiction longlist here first, as they appeared in our indispensable first-half and second-half previews.

Can’t We Talk about Something More Pleasant? by Roz Chast (excerpt)
No Good Men Among the Living: America, the Taliban, and the War through Afghan Eyes by Anand Gopal (excerpt)
Tennessee Williams: Mad Pilgrimage of the Flesh by John Lahr (excerpt)
Age of Ambition: Chasing Fortune, Truth, and Faith in the New China by Evan Osnos (excerpt)
The Meaning of Human Existence by Edward O. Wilson

The 2013 National Book Award winners were announced tonight in New York City. The big prize for Fiction went to James McBride for The Good Lord Bird. Upon arriving at the podium to accept his honor, the noticeably shocked author quipped, “I didn’t think I would win today. … If any of the other writers had won, I wouldn’t feel bad because they are all fine writers, but it sure is nice to win.” His novel, a “literary rendering of John Brown,” the white abolitionist who led an unsuccessful raid on the federal armory at Harpers Ferry, Virginia in 1859, deploys an artfulness and an irreverence that, according to one critic, “becomes not a lampooning of champions and calamities but a new kind of homage.”

The Nonfiction award went to George Packer for his “awe-inspiring X-Ray of the modern American soul,” The Unwinding: An Inner History of the New America. Don’t miss our full review.

The Poetry award was won by Mary Szybist for Incarnadine. During her acceptance, the poet remarked that, “Poetry is the place where speaking differently is the most prevalent.” The winner in the Young People’s Literature category was Cynthia Kadohata for The Thing About Luck.

Earlier in the presentation, E.L. Doctorow accepted the Medal for Distinguished Contribution to American Letters. As our own Bill Morris attests, the award was well-deserved.

Bonus Links: Earlier in the year we dove into both the Shortlist and the Longlist to share excerpts and reviews where available.

The Booker longlist was announced yesterday. Going over the list, I noted that it didn’t seem very multi-cultural. One of the interesting things about the Booker is that any author from the Commonwealth of Nations or from Ireland is eligible. This means that any of 54 countries might send a writer to Booker glory. This year, however, the judging committee is keeping things geographically constrained, with only three countries represented among the 13 finalists:England, 9 (Byatt, Foulds, Harvey, Lever, Mantel, Hall, Mawer, Scudamore, Waters)Ireland, 3 (O’Loughlin, Toibin, Trevor)South Africa, 1 (Coetzee)Moving on to less serious matters, the Booker betting odds are now out (and subject to change as punters put their money on the line). The bookmakers like Toibin and Waters to win, but James Lever is putting in an impressive showing with his mock memoir of a chimp.4/1 Colm Toibin – Brooklyn4/1 Sarah Waters – The Little Stranger5/1 Hilary Mantel – Wolf Hall6/1 J.M. Coetzee – Summertime8/1 James Lever – Me Cheeta10/1 A.S. Byatt – The Children’s Book12/1 William Trevor – Love and Summer14/1 Ed O’Loughlin – Not Untrue and Not Unkind14/1 Simon Mawer – The Glass Room16/1 James Scudamore – Heliopolis16/1 Adam Foulds – The Quickening Maze16/1 Sarah Hall – How to Paint a Dead Man16/1 Samantha Harvey – The Wilderness

The finalists for the annual National Book Critics Circle (NBCC) Award have been announced. The fiction list includes one of the biggest fiction releases of last year and a book in translation. As often tends to be the case, the NBCC is offering up what may be the most well-rounded fiction shortlist you’ll find. Here are the finalists for fiction and non-fiction with excerpts and other links where available. As a side note, the NBCC award is particularly interesting in that it is one of the few major awards that pits American books against overseas (usually British) books. Finally, this was first year of the new John Leonard Prize, which goes to a debut work and was awarded to Anthony Marra for A Constellation of Vital Phenomena.

For more on the NBCC Awards and the finalists in the other categories, visit the NBCC.