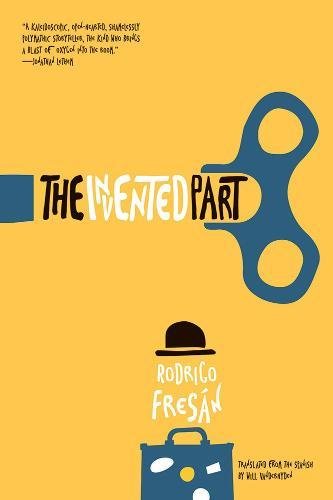 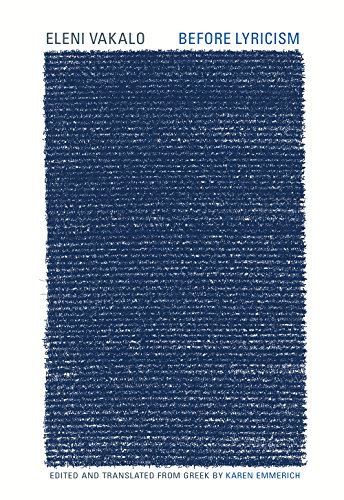 The 11th annual Best Translated Book Awards were announced this evening at the New York Rights Fair. The Invented Part by  Rodrigo Fresán, translated by Will Vanderhyden, won for fiction. Before Lyricism by Eleni Vakalo, translated by Karen Emmerich, took the prize for poetry.
Here are the jury’s statements:

“The Invented Part weaves together the intellectual, the emotional, and the aesthetic as one, resulting in an entertaining, playful, sorrowful, and joyful novel that shows there is new ground to be found in the novel, new structures to be built. To find those structures takes daring and the risks Fresán takes both narratively and stylistically pay off. This book is as generous as it is challenging, as nostalgic as it is hopeful. Rodrigo Fresán is a master, and Will Vanderhyden brings that mastery and all the nuance that comes with it into English. They are a perfectly matched pair, and The Invented Part is an astounding start to this trilogy.”

“Before Lyricism is a captivating collection of poetry as well as an awe-inspiring feat of translation. Eleni Vakalo makes her readers hear and see the images written on the page; the book creates its own world around you as you read. Vakalo pushes the Greek language to its limits, stretching its syntax and playing up its room for ambiguity. Karen Emmerich spent over a decade translating these poems and finding ways for English, normally so resistant to ambiguity, to open up and allow for a similar, unsettling abstraction. The end result is nothing short of miraculous and an absolute pleasure to read in English translation.”

We announced the longlist and finalists here at the site earlier this spring.

More praise from the fiction judges, this from Caitlin Luce Baker: “The Invented Part is a generous, heady, big hearted read. Bouncing from referencing F. Scott Fitzgerald’s Tender is the Night, to Bob Dylan, Pink Floyd, and The Kinks. The Invented Part dazzles. The Invented Part reminded me what a book can do. Thanks to Rodrigo Fresán for writing, Will Vanderhyden for translating, and Open Letter for publishing the book that broke reading for me. Special shoutout to The Kinks for playing in my head as I read The Invented Part.”

Adam Hetherington: “The Invented Part does everything at once, and in a thoroughly modern way that satisfies me like few books ever have. You could take half the blurbs ever written and stick them on this back cover. This thing is absolutely bananas.”

Mark Haber: “A book as generous and warm-hearted as it is intelligent and daring. The Invented Part seems to create (and warrant) the rules of its own existence; a book almost impossible to describe, yet not because it’s difficult, but rather by the sheer dimensions it contains. The book’s obsessions – writers, films, musicians, science fiction – to the eternal questions of love, mortality and illness are integrated seamlessly. The translation by Will Vanderhyden is remarkable and alive, a reminder of what a truly good translator is capable of doing.”

Thanks to grant funds from the Amazon Literary Partnership, the winning authors and translators will each receive $5,000 cash prizes. Three Percent at the University of Rochester founded the BTBAs in 2008, and over the past seven years, the Amazon Literary Partnership has contributed more than $140,000 to international authors and their translators through the BTBA. For more information, visit the official Best Translated Book Award site and the official BTBA Facebook page, and follow the award on Twitter.

Chall writes in with this question:Any National Book Award predictions?Awards season is upon us. The Booker shortlist is out, the winner of the Nobel Prize in Literature will be announced in the next week or so, and the National Book Award finalists will be named on October 15th. Chall’s question gives us an excuse to engage in a bit of speculation, though we’ll stick with fiction for the most part. Offering up some guesses at who might make the NBA cut are Garth and Edan, our two contributors most plugged in to the latest in contemporary fiction.Edan: (some of whose guesses were “completely pulled from thin air, for no reason.”)The Boat by Nam Le (see Edan’s interview with Nam)America, America by Ethan CaninFine Just the Way It Is by Annie ProulxIndignation by Phillip RothThe Good Thief by Hannah TintiEdan also likes An Exact Replica of a Figment of My Imagination by Elizabeth McCracken and The Monster of Florence by Douglas Preston in non-fiction.Garth: (“Edan’s got some good stuff going on with her picks. I think there will be at least one debut author and one book of short stories, and The Boat is a good call. The Canin is interesting, too, as he’s well-regarded and this book hasn’t gotten as much ink as it might have. For the sake of doing something different, I’m going to go another way”)Home by Marilynne RobinsonThe Lazarus Project by Aleksandar HemonAtmospheric Disturbances by Rivka GalchenA Better Angel by Chris AdrianLush Life by Richard Price (a “sleeper” pick)Incidentally, both also wanted to pick Netherland by Joseph O’Neill, which was recently snubbed by the Booker. But I don’t think O’Neill is a U.S. citizen, and that would disqualify him from the NBA. And here are a few of my guesses:Max:Unaccustomed Earth by Jhumpa LahiriThe Monsters of Templeton by Lauren GroffPeople of the Book by Geraldine BrooksCity of Thieves by David BenioffHome by Marilynne RobinsonShare your picks in the comments below. Name up to five books, and the whoever is closest will get bragging rights. Remember: only books with “scheduled publication dates between December 1, 2007 and November 30, 2008” are eligible. And the author must be a U.S. citizen.

The shortlist for a still fairly new, but very worthwhile award has been announced. The Best Translated Book Award highlights work in translation (of course), a corner of the literary world that gets far less attention in the U.S. than it deserves.

“The Best Translated Book Awards launched in 2007 as a way of bringing attention to great works of international literature. Original translations (no reprints or retranslations) published between December 2009 and November 2010 are eligible for this year’s award. Quality of the original book and the artistry of the English translation are the criteria used in determining the winning titles.

Thanks to the support of Amazon.com, each winning author and translator will receive a $5,000 cash prize.”

The shortlist comprises ten books, and six languages are represented:

So long as the Booker Prize keeps longlisting 13 titles, I’m going to keep making that joke. The Booker season is underway with the unveiling of 2008’s longlist. As is often the case, it is a mix of exciting new names, relative unknowns and old standbys. In the later category is Salman Rushdie who, as the recent winner of the Best of the Booker, was essentially named the quintessential Booker author and would have thus seemed an odd omission, despite the tepid notices The Enchantress of Florence has received.Perhaps worthy of more excitement is Joseph O’Neill’s Netherland, which was the subject of dueling reviews from Garth and Kevin here at The Millions. The active commenting on Kevin’s review in particular underlines the enthusiasm that this novel has generated. Tom Rob Smith’s Child 44 has also generated quite a bit of enthusiasm this year. In December, Dan Kois of the New York magazine blog Vulture featured it in a contribution to our Year in Reading series. As always, the bookmakers have their own favorites: “Bookmakers William Hill have put Mr O’Neill as favourite to win the prestigious prize at 3/1, while Sir Salman has odds of 4/1.”All the Booker Prize longlisters are below (with excerpts where available):The White Tiger by Aravind Adiga (excerpt)Girl in a Blue Dress by Gaynor ArnoldThe Secret Scripture by Sebastian Barry (excerpt)From A to X by John BergerThe Lost Dog by Michelle de Kretser (excerpt)Sea of Poppies by Amitav Ghosh (excerpt)The Clothes on Their Backs by Linda Grant (excerpt pdf)A Case of Exploding Mangoes by Mohammed Hanif (excerpt)The Northern Clemency by Philip HensherNetherland by Joseph O’Neill (excerpt)The Enchantress of Florence by Salman Rushdie (excerpt)Child 44 by Tom Rob Smith (excerpt)A Fraction of the Whole by Steve Toltz (excerpt)