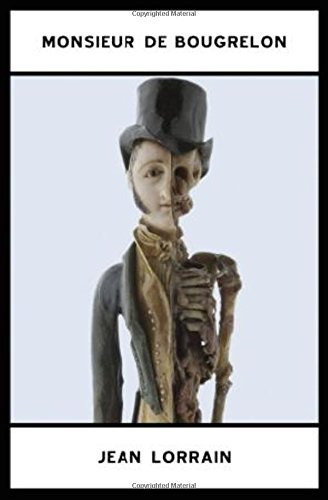 As eras accrue and each literary movement gives way to the next, canon space (which remains fixed) becomes survival of the fittest. Ludwig Tieck, William Congreve, and Francisco de Quevedo were household names in their day, but are now anthology also-rans of their respective movements.

So who gets to be heard from among those morbid aesthetes known as The Decadents? Charles Baudelaire features most prominently as the movement’s inaugural figure. And Arthur Rimbaud, certainly, though he is more sui generis than representative. Oscar Wilde abides, but as a pithy epigrammatist. If Rachilde survives, it will likely be under an alternative rubric (her Monsieur Vénus is a proto-feminist, gender-fluid masterpiece). Dyed-in-the-wool Decadents like Joris-Karl Huysmans, Théophile Gautier, Octave Mirbeau, Auguste Villiers de L’Isle-Adam, and Jean Lorrain are in all likelihood battling it out for one or zero paragraphs in literary history. (Huysmans being the favorite grandson of Edgar Allan Poe at present, and enjoying a boost from an extended cameo in Michel Houellebecq’s Submission.)

This battle is waged, for the most part, in academe, but occasionally an intrepid publisher will root around among the dead and resurrect a neglected figure. Spurl Editions is a case in point with their recent translation of Lorrain’s Monsieur de Bougrelon (originally published in French in 1897). Not quite forgotten (but en route), Jean Lorrain was an impeccable stylist and savage critic of other writers (he fought a half-hearted duel with Marcel Proust and was challenged/sued by other fin de siècle notables). His exquisite (if precious) prose rivals the man who almost shot him, but contemporary readers may surfeit of his elaborate characterizations and attention to ornament.

Sumptuously translated by Eva Richter, Monsieur de Bougrelon is delivered with characteristic flourishes and yet its bejeweled chest eventually opens to reveal the beating heart of a Decadent ethos. The title character’s affectations, faded glory, and tales of yore regale two Parisian tourists (our narrators) in Amsterdam, who’d thus far been bored stiff by Baedeker attractions. Bougrelon appears to them apparition-like, an absurd, pathetic dandy who seems at best deluded—though his delusions prove carefully crafted—at worst insane. Yet his antics and anecdotes are a welcome alternative to the overviewed “sights” of Amsterdam. (The book is based on just such a lackluster trip to Amsterdam taken by Lorrain and Octave Uzanne.)

Much of the novel is driven by Bougrelon’s tales (Lorrain’s m.o. being told tales) which revolve around his former friend (and lover?) Monsieur Edgard de Mortimer. This framing device creates an interesting set of pairs meant to mirror and play off of one other: Bougrelon/Mortimer, Narrator/Companion, Lorrain/Uzanne. Bougrelon extols Mortimer’s beauty (“vermilion lips,” etc.) and compares him to Antinous and Patroclus, rendering his account of the pair’s exploits with women a thinly veiled projection of their love for each other.

The most salient feature of Mortimer is his being dead, and thus a product of romanticized memory. He is a legend in Bougrelon’s mind, to whom the past is fundamentally superior to the present, as is artifice to reality:

Therein lies the nostalgic, aesthetic soul of the fin de siècle. With his flamboyant costuming, elaborate décor and rhapsodic reminiscences, Lorrain is not applying lipstick to the pig of reality, but trying to elevate artifice and anachronism to a way of being in the world. Obsessed with Truth, his literary forerunners (epitomized by Zola’s Naturalism) endeavored to strip away the manners, prejudices, and pretense of life; Lorrain and his cohorts prefer to take refuge therein.

I am an idea in an era that has no more of them.

More style than substance (at face value), Monsieur de Bougrelon is steeped in the superficial—an oxymoronic epitaph for its author and the Decadents in general. To Lorrain/Bougrelon (though the title character is a caricature of Jules Barbey d’Aurevilly, his sentiment is Lorrain’s) the cadaverous human face needs to be made up or masked, and the banality of life confabulated into wild pageants of unreality.

To that end, Bougrelon/Lorrain drapes Baroque tapestries over a void, but the dreadful nothingness behind the curtain is continually intimated, poised to engulf the artifice. The author’s outward aim is merely an inversion of the grimace behind the mask, the ennui behind the acts. Many Decadents revel in a rejection of the real, but for Lorrain it is flight, not pilgrimage, that drives his figures to the outlands of a reality they can never quite escape.

Openly gay (effectively, though he never came out), Lorrain eschewed the hetero-mask of so many authors (e.g,. Proust, whom he’d outed in print) and this renders his preoccupation with artifice, presentation, and masks, in particular, paradoxical. His masks are not meant to conceal or replace what lies beneath, but rather to present themselves as masks. In a story from his Nightmares of an Ether-Drinker (Snuggly Books, Tr. 2016), figures are unmasked to reveal nothing, not even a face, beneath. It is artifice for artifice’s sake and yet the gorgeous, intricately ornate milieu is not a paradise on earth, but an indicator of its own non-existence and the hell which underlies it.

A similar ambivalence attends Lorrain’s occult tales, as he never quite bought in to the mysticism his fellow Decadents took so seriously. His spectral presences are representatives of reality, and not some mysterious beyond. The ghosts, grotesque monsters, and filthy animals are the human beings who walk the city streets. They are not transmogrified, merely revealed in their true aspect.

Readers who can appreciate the rich prose and unsettling psychoanalyses will nevertheless encounter the formidable obstacle of Monsieur de Bourgrelon’s unabashed racism. Though of its time, Lorrain’s racist zoomorphism is a barrier. Bourgrelon’s telling of a simian “Negro” servant murdering a white woman is appalling, and not to be forgiven by a relativist footnote (though it should be said that none of Lorrain’s characters escape his savage zoomorphism.)  So the original question remains, why should Monsieur de Bougrelon survive the cull of literary history? What distinguishes it among Decadents, renders it relatable, and/or speaks to the human condition?

A case could be made for Monsieur de Bougrelon being both indicative of an ethos and simultaneously striking a tone that most Decadents bypass en route to the logical extremes of melodrama and sado-masochism. It grows tender where most tales of the time (including Lorrain’s own) remain ruthless, and while each Decadent offering is infected with melancholia, few allow the sadness of anachronism and human futility to wash over their protagonists as does Lorrain with Bougrelon.

As we advanced, slowly and contemplatively, along those display cases that were like sarcophagi, an infinite sadness, a tender compassion, penetrated us, wearying and soothing at once…we drifted from here to there, beyond the century, no longer in a museum but in a sickroom, almost afraid of waking the souls that were in the rags laid out before our eyes.

His “imaginary pleasures” and that companionable stroll through the “boudoir of the dead” are monuments to sorrow, not sadism. More Quixote than Huysmans’s des Esseintes, Monsieur de Bougrelon is a comic figure made tragic by self-awareness. When his mask is finally, definitively ripped off (“in a cabaret where sailors danced”), it reveals not a grotesque, disfigured face, but rather the “rueful countenance” of a bygone era.

Steven Felicelli is the author of two novels (Notes Toward a Monograph of the Moment/Six Gallery Press, White/Purgatorio Press) and book reviews which have appeared in The Rumpus, The Collagist, The Critical Flame, Minor Literature(s), Rain Taxi and Necessary Fiction. He was born in Chicago and now lives in the Bay area with his wife and children.

Reviews
Quick Hits Reviews
Reviews
Stoicism offers a maturity toward what extinction means. What is death to fear when there was a time that we did not exist? When we were already dead?
Reviews
Ed Simon | 1 9 min read
● ● ●
Reviews
What makes a tall tale like “Whiskey When We’re Dry” so distinctly American, though, is its interest in chronicling the individual rather than the past.
Reviews
Patrick Thomas Henry | 5 min read
● ● ●

Reviews
George's frank dystopias do not rely on beauty or brutality or humanistic appeals to sell themselves. Just a vision and a ghoulish sense of humor.
Reviews
Michael Deagler | 5 min read
● ● ●
Reviews
Reviews
Reviews