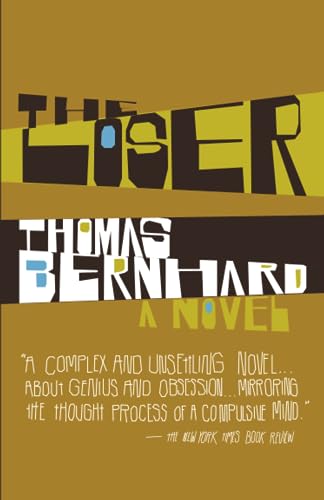 In 1998, I wrote music for a production of Friedrich Schiller’s play Mary Stuart at the American Conservatory Theater in San Francisco.  The director was my friend Carey Perloff, the music was sung by the spectacular men’s vocal ensemble Chanticleer, and the translation of the text was by the writer and Village Voice theater critic Michael Feingold.  There can be a lot of down time for a composer and a translator during theater rehearsals so Michael and I passed the time telling each other stories about books we should be reading, and Michael suggested I read Thomas Bernhard’s The Loser.  So I did.  As soon as I got back to New York I picked up a copy and I was immediately hooked by the power of the novel, especially the psycho energy of the narrator.  Written in the first person as a continuous stream of jumbled information — one giant paragraph — and changing its focus and time and location and perspective and subject matter with almost every other sentence, it really felt like a rant to me — a condescending, angry, smart, rich, witty, not very nice man ranting about his life.  I couldn’t read it silently.  I ended up yelling the entire book to my reflection in the mirror in my bathroom, from start to finish, which was very exciting.  And that day I started imagining what it would be like to add music to it.

I was drawn to the tightness of the language, the intensity of the character and to the self consciously indirect way the story is told, but most of all I was drawn by the subject matter.  The novel tells the story of a man, never named in the book, who wanted to be a concert pianist when he was young.  He was good enough to participate in a master class with Vladimir Horowitz, but in the same class was a young Glenn Gould, and the knowledge that Gould would always be a better pianist than he could ever be destroyed his life, and the life of his best friend, Wertheimer, who was also in the master class.

There is not much plot.  The narrator’s friend Wertheimer has just killed himself, causing the narrator to reflect on their relationship together, their relationship to Glenn Gould, to the people and places and history of their native Austria, to their wealth and class, and to the odd philosophical thoughts they explored over the years to keep their various Glenn Gould fetishes alive.  And Wertheimer has a sick relationship with his sister, which is discussed in great detail.  Eventually there is a little bit of action — the narrator goes on a trip to Wertheimer’s hunting lodge to see if he can find Wertheimer’s notebooks, which may contain writings about the narrator, or about Glenn.  That is pretty much it.

One way to read the book is as a painful meditation on disappointment.  This is certainly a theme that runs through many of Bernhard’s novels.  The Loser has its own special type of disappointment for musicians, however, which is guaranteed to hit us where we are most vulnerable.  To become a musician is to throw yourself into years of study and practice and hard work, all of which you must pursue wholeheartedly and without compromise, before you can even begin to ask yourself if it might pay off.  It is an immense struggle just to get yourself to a high enough level of sophistication and proficiency that you can see and understand just how much higher you will need to go.  The close connection in The Loser between the erudition of the narrator and his disappointment feels all too real to us.

This feeling was also very real to Thomas Bernhard.  Like his narrator, Bernhard trained to be a musician, before a health crisis forced him to give it up.  Many parts of the novel are autobiographical, with odd fake details about Gould that in real life were facts about Bernhard himself.  Most of these details are tiny — about various diseases or locations.  Bernhard’s sense of musical disappointment, however, is fundamental to the novel.  Not only does it feel authentic throughout, but it also plays into a musician’s deepest fear, that he or she will never be good enough.

I had a very personal connection to reading the book and I wanted to preserve that, to make sure that my own reading remained the center of the piece.  And my opera really is in the service of the reading of the book.  I made the libretto entirely out of the (excellent) translation into English, I didn’t change a single word or the order in which any of the text occurs, just trimming it all for length — I wanted to preserve its odd and compelling flow.  And I had an idea of how to stage it that would keep our attention on how the character of the narrator is revealed, and not on the actions described or the physicality of the performers.  I wanted to keep everything as true to a reading of the book as I could make it.

I began with cutting the text into a workable libretto.  There is only so much one singer can sing, so there was a lot of amazing, significant material I had to cut out.  I omitted almost all the nasty things the narrator has to say about Austria and Switzerland, which is a huge part of the book.  I ended up having to take out many things that are quite important — I left out that the narrator is a failed writer, I left out Wertheimer’s funeral and burial, that Wertheimer was Jewish, etc.  What I tried to keep were the things that allow us to see better into the persona of the narrator.  Our perception of him changes across the novel, as Bernhard shows us more of his inner life.

It is this aspect of Bernhard’s storytelling that ended up exciting me the most as I went about adapting it.  It seemed to me that managing our perceptions of a character could be a new way to focus action in an opera. Opera traditionally includes love and death and revenge and coincidence and mistaken identity and elephants — usually a lot goes on.  I loved the idea that the dramatic shape of an opera could be made only out of the changes in how we perceive the motivations of a character, and how the music reveals him to us.

I have also been the stage director for this opera.  For the staging I wanted to make physical the separation that the narrator feels from Glenn Gould, and from the life that he did not lead.  I had the idea to seat the audience only in the mezzanine of the Opera House at the Brooklyn Academy of Music, and build a platform right in front of us, on which the narrator stands.  It seems like he is floating in space, telling us his story, within the giant void of the empty hall.  Two thirds of the way through the piece, the stage behind him begins to glow, revealing a piano floating in the air.  A pianist begins to play, a very delicate and simple music.  We can’t hear it very well, because in front of us a man is singing, very intensely and directed right at us, about his miserable life.  What I hoped we would feel in this staging is that there is something blocking our path to the beauty of the piano on stage, just as the narrator’s path to the piano became blocked.  We become frustrated at not being able to hear the music.  Frustration is a big part of the reading of The Loser as well.

I am grateful to all the amazing musicians who have helped me make this piece — the commanding Rod Gilfry as the narrator, the very sensitive piano virtuoso Conrad Tao, an ensemble of great musicians put together by Bang on a Can and conducted by Karina Canellakis.  Most of all I am grateful to the Next Wave Festival at the Brooklyn Academy of Music, and in particular the courageous Joe Melillo, for commissioning this work and for letting me make it.

David Lang In the words of The New Yorker, “With his winning of the Pulitzer Prize for the little match girl passion (one of the most original and moving scores of recent years), Lang, once a postminimalist enfant terrible, has solidified his standing as an American master.” Lang’s score for Paolo Sorrentino’s film Youth received Academy Award and Golden Globe nominations, among others. Other recent work includes man made, a concerto for So Percussion and orchestra, co-commissioned by the Los Angeles Philharmonic and the BBC Symphony; his opera anatomy theater, written in collaboration with visual artist Mark Dion, at Los Angeles Opera; and the whisper opera for International Contemporary Ensemble, which premiered at the Museum of Contemporary Art in Chicago and at the Mostly Mozart Festival at Lincoln Center. Lang is a Professor of Music Composition at the Yale School of Music and is co-founder and co-artistic director of New York's legendary music festival Bang on a Can.

Essays
Essays
Shafrir, Lacey, and Nutting have written novels about women who just want out: of their love lives, their work lives, and the networks that startup culture has engineered to broker mergers between the two. Please, they are saying. Stop it. Leave us alone.
Essays
Crystal B. Lake | 2 books mentioned 1 6 min read
● ● ●
Essays Reviews
Essays
I found solidarity in understanding that across time and culture and language, those who are marginalized and repressed continue to resist.
Essays
Crystal Hana Kim | 2 books mentioned 5 min read
● ● ●