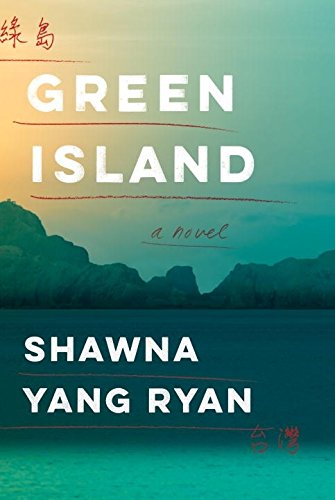 There’s a moment in Shawna Yang Ryan’s soaring new novel, Green Island, where the narrator is about to break away from the life she’s always known; she will shortly be leaving Taiwan behind — emigrating across the Pacific Ocean to California. Her father comes into her bedroom as she’s packing. He has a gift, of sorts, for her. He’s brought a jar of soil from the family garden.

“I want you to remember.” He set the jar atop my heaped clothing. “Don’t forget.”

Don’t forget. His words were both an order and a plea.

It is February 1972. Richard Nixon is on his trip to China. Visiting Hangzhou, he’s completing the diplomatic mission that will open formal relations with the PRC. Taiwan, of course, watches with concern; China is a hostile power; with the recognition of the People’s Republic by the United States, Taiwan’s sovereignty might soon be at risk.

These, then, are the twin concerns of Green Island: the political and the personal. Indeed, just a few pages earlier, Nixon’s visit has been relayed by the novel’s narrative voice:

Nixon stands against a metal rail and tosses food into the water with concentration and joy. He drops into a grinning reverie as if he has forgotten the entire world is watching.

“Dr. Kissinger,” the translator says, “you can have a package if you want to feed the fish.”

They stand here at this moment, three of them the most important people to the fate of Taiwan — Richard Nixon, Chou En-lai, and Henry Kissinger — on an overcast day in Hangchow, feeding fish.

Walter Benjamin wrote that it is, “more arduous to honor the memory of the nameless than that of the renowned.” And there are a number of novels, right now, that are balancing these antipodes — that take significant, well-known historical moments, and show them through the lens of nearly powerless, “nameless” protagonists. Through individuals buffeted by the afflictions of their age.

Of course, Anthony Doerr’s All the Light We Cannot See — with over two million copies sold, in hardback — is an example of this. Doerr’s novel follows two deeply-menaced protagonists — Marie-Laure LeBlanc and Werner Pfennig — as they move within the world of German-occupied France. Though Werner has enlisted in the Nazi army, he has done it from necessity, and his efforts to retain his decency in the face of war, in a way, end up causing his death. Marie-Laure is blind; the conflict threatens her in a bodily way; she feels wholly apart from the big geopolitical forces that are — with generalized malice — trying to kill her. She is a suffering witness to history.

Many of the successful literary novels of the past 30 years have negotiated a similar territory, pairing small characters and big circumstances. Girl with a Pearl Earring (Griet, the fictional household servant, and Johannes Vermeer), Salman Rushdie’s Midnight’s Children (fictional Saleem Sinai, balanced against the political and social figures of the 1947 Partition of India and Pakistan), Charles Frazier’s Cold Mountain (W.P. Inman, the wounded Confederate deserter, and the army he’s just left), Margaret Atwood’s Alias Grace (the fictional doctor Simon Jordan, and the 19th-century murderer Grace Marks) even Toni Morrison’s Beloved (Sethe and the Fugitive Slave Law of 1850), have all paired erstwhile anonymous, imaginary characters with unquestionably “real” circumstances. These books do not ignore history; they don’t neglect the geopolitical events that shape the societies in which their characters have “lived.” Rather they thread their characters through these times, using the novel as an opportunity to show the impact of world-historical events on individual lives.

In “An Essay Concerning Human Understanding,” John Locke says that, “the pictures drawn in our mind are laid in fading colors.” The project of the historical novel, then, is fashioned as an assault on this very fade. We, as human beings, struggle to remember, to retain a sense of the past. It has — surprise! surprise! — passed. But by inserting ordinary people into its great events, novelists can once again vivify and free the emotions of departed times. In a way, this is a gesture of resurrection. The text as Lazarus, stumbling — bandaged by covers — out of its dark cave. If the struggle of man against power is, indeed, the struggle of memory against forgetting, then the historical novel is — imaginatively, at least — a part of that struggle.

As for the marketplace — its appetite for this type of book is not surprising. Since the early 1990s, when publishers started calling it “upmarket historical fiction,” many successful literary novels have been set in a time — or place — other than our contemporary world. But the willingness of literary tastemakers to accept a work of historical fiction as “important” does feel like something new. Whether it’s Rachel Kushner’s The Flamethrowers, Eleanor Catton’s The Luminaries, Marlon James’s A Brief History of Seven Killings — or two of the most anticipated novels of 2016: Alison Anderson’s The Summer Guest and Mark Beauregard’s The Whale: A Love Story — it feels like there is a vast new space opening up in the fiction world, one that has the potential for both critical acclaim and strong sales.

Writing last month in The New Republic, the novelist Alexander Chee touched on some of these issues. Chee, of course, has just published the historical novel, The Queen of the Night — a book that has, as its central axis, a fictional 19th-century coloratura soprano, Lillet Berne. The book has been well-received, with positive reviews in nearly every major periodical, The New York Times, The Wall Street Journal, NPR’s Weekend Edition, Time, Vogue, The Atlantic, The Boston Globe, The San Francisco Chronicle. It also went through multiple printings before its publication.

Still, Chee was worried about the reaction his fellow writers had whenever he told them he was working on a novel set in the past. Writing last month in The New Republic, Chee said that it was, “as if I’d announced that I was giving up years of hard work writing literary fiction to sell out and become a hack. I had inadvertently hit on a literary taboo.”

Yet both Alexander Chee and Shawna Yang Ryan took nearly 15 years to complete their novels. Labor on this scale is almost unthinkable. It is perhaps the exact antithesis of the genre model of fiction writing — with the rapacious, regular demands of the marketplace. The bruising deadlines, the concept-driven, pre-packaged product. Clearly, these two historical novels — with their robust intellectual projects, their deeply imagined settings — are of a different order. The hours-per-page, per-sentence, per-word — for both The Queen of the Night and Green Island — would discourage any beginning novelist.

Ryan’s experience was similar. “It kind of took over my life for the last decade and a half,” she said. Building her book’s foundation was an arduous process. In a conversation with The New York Times, she described the work of structuring the novel. Her dedication to craft — and her ceaseless evaluation and reevaluation of the project’s success — was built on a twinning of imagination and historical exploration. “I often thought of my research as similar to unraveling a sweater,” she said. “I’d tug at one thread, and a whole sleeve would come undone.”

Pauls Toutonghi 's first book-length work of nonfiction -- Dog Gone -- will be published by Knopf in June. The author of two previous novels, he has won a Pushcart Prize, and written for The New York Times, Virginia Quarterly Review, Tin House, Granta, and numerous other periodicals.

Essays
Essays
Reed brought an informed, sophisticated writer’s eye to the kinds of underworlds he observed, and his sense of language was as keen as a journalist’s.
Essays
Matt Hanson | 12 books mentioned 2 8 min read
● ● ●
Essays
They mean to prepare the reader for what comes next, the story of the particular way in which time flowed over or through France these past 70 years.
Essays
Arthur Willemse | 12 books mentioned 8 min read
● ● ●
Essays
Like a dream where unfamiliar rooms are discovered in one’s own house, the alternate history has a spooky quality to it, and the mere existence of such conjecture forces us to confront profound metaphysical questions.
Essays
Ed Simon | 12 books mentioned 3 15 min read
● ● ●

Recently, I happened upon a news story from a paper in India about a floating library, a giant ship of books, that was set to dock in Chennai. It sounded like something out of Borges, and I looked into it further. The MV Doulos is the world’s oldest active ocean-faring passenger ship. In its long life, dating back to 1914, it has sailed under four different names and been a freighter, a luxury liner and, during World War II, it served with the US Coast Guard. In 1977, the ship was acquired by Gute Bucher fur Alle e.V. (Good Books for All), a German non-profit, and since then it has sailed, loaded up with books, to 100 countries and 515 ports of call. The Doulos Web site’s description of what the ship does:Doulos carries a stock of half a million books. In total, over 18 million visitors have come on board to browse the selection of 4,000 available titles. Titles cover a wide range of subjects, such as science, sports, hobbies, cookery, the arts, economics and medicine, as well as books on faith in God and living life in God’s service. The books have been carefully chosen to cater to interests of all ages, and keeping in mind the educational, social and moral needs of the local community. A large selection is devoted especially to children. Local language materials supplement the vast array of English books. The books are offered at a fraction of their retail value. In some ports significant quantities are also donated.It sounds pretty amazing, but you’ll note as well the part in the above description about “faith in God and living life in God’s service.” Having, of course, never set foot on the Doulos, I wouldn’t want to pass judgement on their mission, and I hope that “Good Books for All” is one of those organizations that does not let religion subvert its secondary mission, but a look at a few news stories about the ship show that it is not without controversy.In The Organizer an opposition weekly in India, there is an angry article about the ship’s current visit to the country: “The crew was trying to spread Christianity among the visitors rather than promoting reading habit.” Another article, this one in The Hindu, describes long waits to board, but not the religion issue.Prior to the India visit, in Bahrain, the controversy was not over Christianity but that the ship violated rules against commercial activity by foreign entities, according to this Gulf Daily News story. It was eventually resolved. After a few searches, though, it seems clear that most folks appreciate the ship, even in places that might seem hostile to it, including Abu Dhabi, for example. In Mauritius, local booksellers have been angered by the cheap prices of the books on the ship.The ship sounds like a complicated thing, noble and magical as it conveys books around the world, but vaguely sinister as it, according to some, pushes religion on visitors and undercuts locals. I’d like to see it for myself.