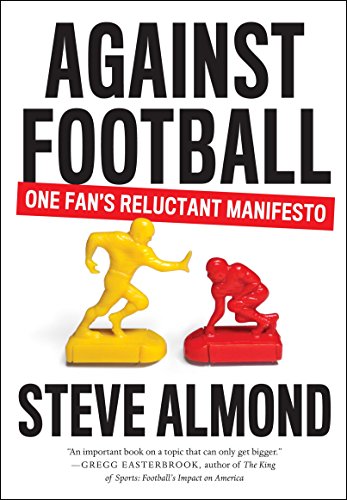 Football is the most popular sport in America. Baseball, basketball, hockey, and even sometimes that suspect endeavor known as soccer all have their adherents. But when it comes to true rallying power, no other athletic contest outside of the Olympics can reliably achieve critical mass like professional and college football.

This is a truth rarely acknowledged. Football knocked baseball, that lazy and pastoral game of grass diamonds and poetic sinkers, off the perch sometime after the Second World War. Baseball is still referred to as the national game. But a glance at how the country comes to a nacho-sated halt on Super Bowl Sunday but barely misses a beat during the World Series tells the true story. Maybe that’s because Americans know there is something intrinsically negative about the institution of football itself. Maybe we as a country would rather think of ourselves as fans of baseball than football. Spectators at the Roman Coliseum, after all, knew there was something untoward about watching one gladiator sever another’s limbs, no matter how lustily they egged him on. Ken Burns will never make an 11-part PBS documentary on football.

If popular sports constitute a feedback loop with society, each reflecting and influencing the other, it’s difficult to argue that football’s dominance is a positive thing. With the steady drip of grim news about crooked stadium deals, domestic violence, and the ever-mutating and worsening concussion scandals — and that’s without even getting into college players who read at a 5th-grade level and the various high school team mass-rape outrages — what’s a football lover supposed to do? How much should they care? What’s the ethical thing to do? Is it possible to simply watch and yet not be complicit? What, if any, are a fan’s responsibilities?

Steve Almond wrestles with a swarm of similar quandaries in his short, lacerating new bar-argument of a book, Against Football: One Fan’s Reluctant Manifesto. It isn’t an argument he was itching to have. Almond is a bone-deep fan of the game: “I am one of you.” This is a crucial bona fide for somebody churning up this kind of imbroglio. To describe with any authority what is truly awful about football, it helps to love it and to know it.

In the first place, for all its seeming simplicity of quadrilateral lines and battle formations, football is a wildly complicated game studded with arcane rules that take some time to appreciate. Secondly, since football discourse’s tenor trends toward tribal defensiveness and instantaneous fury, any negative opinion about the game from a non-fan is dismissed even quicker than if said by a true believer.

Like most of us, Almond thought he was immune from modern sports mania’s entanglements. We all know (and some of us resemble) the type, eyes scouring for the nearest screen showing SportsCenter, phones lit up by fantasy scores and trash-talk, ears always full of the angry drone of sports talk radio. No matter the mountains Almond would move to watch his Raiders lose time after catastrophic time, he thought he could stay above the fray.

In the preface, Almond describes a newspaper article he pasted to the wall of his office, which contains a quote from running back Kevin Faulk after he took a head-rattling hit. Faulk’s words were clearly those of a man who had suffered a significant blow to the brain. Almond writes, “I thought it was funny:”

I assumed, in other words, a posture of ironic distance, which is what we Americans do to avoid the corruption of our spiritual entanglements. Ironic distance allows us to separate ourselves from the big, complicated moral systems around us (political, religious, familial), to sit in judgment of others rather than ourselves. It’s the reason, as we zoom into the twilight years of our imperial reign, that Reality TV has become our designated guilty pleasure.

But here’s the thing. You can run from your own subtext for only so long. Those spray-tanned lunatics we happily revile are merely turned-out versions of our private selves. The whores we hide from public view.

Almond is disturbed by what he sees as a pernicious blend of unthinking brutality and fooling-ourselves mass consumption. There is the hypocrisy that leads thousands of fans in stadiums and TV rooms to first shout at their guy to take the other guy’s head off, then sit quietly once the poleaxed player is crumpled comatose on the turf, and then applaud in self-congratulatory fashion when he limps off the field.

Wisely, Almond doesn’t spend much time on proving the concussion crisis; which is less a new crisis than an inherent part of the game that is only now considered a crisis because it is being recognized. After years of long-form newspaper investigations to Frontline’s damning “League of Denial” excoriation from last year, there is little left to argue about, even as the National Football League’s minions fold, mutilate, and spin the truth like those Big Tobacco lawyers and lobbyists of old. The evidence gathered points to the average football player being, because they spend so much of their time slamming into large powerful men (who, thanks to specialized training and all those drugs the teams don’t know anything about, get larger and more powerful every year), more likely to die younger and have some kind of brain damage than the average citizen. Suicides, mental illness, depression, violence; it’s all the legacy of that slam-bang contest we fans cheer for.

This barbarousness is allowed to continue in a civilized society, Almond argues, because of how the NFL has stage-managed the sport. Having the help of a lamprey-like “bloated media cult” certainly helps. To Almond, the spectacle of modern football means watching “aggression granted a coherent, even heroic, context.” That line will ring true to anybody enthralled as a child by the exploits of those gigantic, larger-than-life combatants. We are not meant to see mere athletes out there, but warriors.

This sleight of hand is helped along by a few factors: the sport’s militaristic nature (coordinated units, tactics, maneuvers, lines of assault, blitzkriegs); those gorgeously snow-speckled and slow-motion Homeric epics churned out by the league’s “ministry of propaganda,” NFL Films; and actual military involvement. Fewer football games today are absent a visit from one branch of the armed services, not to mention the fluttering of flags on the giant display screens and even flyovers. Some games are so thick with patriotic militarism that it wouldn’t shock to see a procession of portable missile launchers being saluted, Soviet premier-like, by the good commissioner Roger Goodell.

For an illustrative example of what Almond terms our “imperial decadence,” witness the scene from the 2010 de Tocqueville-lite BBC series Stephen Fry in America. The British wit is happily taking in the Iron Bowl (Auburn University vs. University of Alabama), only to drop in fright at the sound of jets screaming overhead. Being British, Fry didn’t understand that an American college sporting event couldn’t be properly enjoyed without a display of military might.

Almond threads his critique of the Pentagon-NFL axis into a broader appraisal of how the American citizenry simultaneously valorizes and dehumanizes its heroes, whether on the football field or the field of battle:

The civilian and the fan participate in the same system. We off-load the moral burdens of combat, mostly to young men from the underclass, whom we send off to battle with hosannas and largely ignore when they return home disfigured in body and mind.

It is a paradoxical dynamic. After all, part of what it means to be a football fan is that we have a sophisticated appreciation for the game, and a deep respect for the players who compete at the highest level…But it turns out that our adulation…is highly conditional. As soon they no longer excel on the field, they become expendable.

Almond stalks through his arguments against the modern state of football at a pace that is both clipped and highly personal. There is a lot of shame here, a discomfort with being complicit in that “system” lying at the root of his angry screed. Like many a blue-state fan, his liberal nature is offended by being complicit in the advertorial-spewing, money-mad agglomeration of celebrity and cruelty that is the NFL and its media courtiers.

Some of Almond’s arguments tip toward a to-hell-with-all-that disgust. That sense is heightened in his vitriol against the league’s anti-labor practices and corporate welfare-piggery, which makes it all the more difficult to ever enjoy sitting in a stadium mostly built by public funds but the profits of which mostly go to whichever billionaire owns the local franchise. He doesn’t quite take it to the level of Noam Chomsky arguing in Manufacturing Consent that professional sports being just another way of “building up irrational attitudes of submission to authority and group cohesion…it’s training in irrational jingoism.” But he’s not far off.

The book’s tenor becomes so heated, in fact, that when Almond executes a deft spin into a “what do we do with football?” epilogue that tries to address what fans can do to humanize the corporate monster of football, the whiplash is severe.

There is something rushed in this book, as though it were powered out in a few heated marathon sessions. It leaves some of the book feeling thin. But this is a manifesto. It’s a broadsheet in book form meant to be powered by heat and what Almond refers to as his “obnoxious opinions.” As such, Against Football doesn’t have a strong and satisfying conclusion. No such piece written by a true fan likely could. Short of calling for abolition, there’s no easy way to resolve the issues raised here. Football is wired too deep into the national identity for it to be yanked out or wholly reworked without some pain.

In 1947, E.B. White published a playfully predictive New Yorker two-pager called “The Decline of Sport.” He imagined a future in which “sport gripped the nation in an ever-tightening grip” and the workweek was reduced to three days, “to give everyone a better chance to memorize the scores.” The mania builds and builds until, at a game with 954,000 spectators, a deranged man shoots one of his team’s receivers dead after the player dropped a scoring pass. The bubble bursts:

From that day on, sport waned. Through long, noncompetitive Saturday afternoons, the stadia slumbered…the parkways fell into disuse as motorists rediscovered the charms of old, twisty roads that led through main streets and past barnyards, with their mild congestions and pleasant smells.

Against Football is a book that kicks and prods and fights with itself and ourselves. Almond is asking himself and us to drop the ironic distance, open our eyes, and truly look at the dangerous, vile, beautiful, fun, highly corrupted, and horrifically corrupting corporate behemoth we spend so much of our money and leisure time enraptured by, and know what it is that we are doing, and what we are supporting. Part of that process might be just taking a couple steps back, shaking off the spell.

Maybe a few more drives down old, twisty roads would do us all some good.

Chris Barsanti is a member of the National Book Critics Circle and the Online Film Critics Society. He has written for the Chicago Tribune, Film Journal International, PopMatters, Slant, Publishers Weekly, and Rain Taxi Review of Books, among others. He has written books about Keanu Reeves, presidential elections, and topics in between. Musings can be found at chrisbarsant.net and Eyes Wide Open.