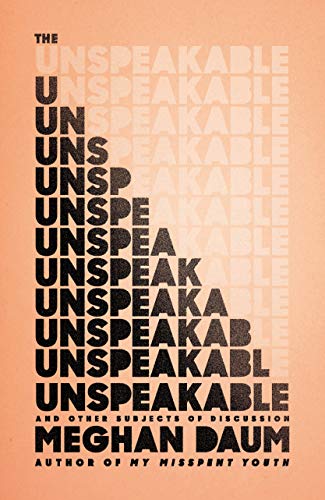 I don’t think of essay collections as “unputdownable” — in fact, one of their virtues is that they can be put aside and easily revisited — and yet I couldn’t stop reading Meghan Daum’s The Unspeakable: And Other Subjects of Discussion. I would promise myself, just one more, only to make the same promise at the end of the next essay. When I came to the end of this too-short book, I ordered Daum’s 2001 debut essay collection, My Misspent Youth. It was fascinating to go back in time and encounter Daum’s younger voice. The essays of My Misspent Youth are charming and funny and honest, but they seem animated, in part, by Daum’s fear that she will never become a proper adult. In one of these earlier essays, “Toy Children”, Daum tries to pin down her hatred of dolls and concludes that she dislikes them because: “They’re my greatest nightmare come true. They never, ever grow up.”

Daum can relinquish that particular nightmare. The Unspeakable is a grown-up book that grapples with grown-up subjects: death, grief, regret, and aging. Press materials call it a report from “early middle age,” an expression that I have to believe made Daum laugh. By any actuarial or cultural measure, Daum is firmly in middle age: she’s in her 40s, she’s authored books, bought a house, gotten married, buried her mother, and been hospitalized for a major illness. I know all these things because she writes about them in her essays which, taken together, hit me more like a memoir. There’s a unity and depth to The Unspeakable that gives it more weight than My Misspent Youth.

The collection’s opening and closing pieces are the most straightforwardly autobiographical. The first essay, “Matricide”, about the death of Daum’s mother, ends with Daum’s own recovery from a life-threatening illness and then a miscarriage. She sees the line between life and death multiple times and yet she can’t locate any feelings of transcendence. There’s only bewilderment. Daum goes deeper into her bewilderment in the book’s closing essay, “Diary of a Coma,” which documents her rapid mental and physical collapse after contracting a freak virus. In the wake of her coma, Daum is struck by how little has changed for her, despite the fact that she almost died: “There is no epiphany or revelation or aha moment or big click. There is no redemption. There is no great lesson learned. There is only the unknowable and the unspeakable.”

In other words, Daum won’t be giving out any life lessons. The only piece of advice she offers is “if you’re good at something, do it a lot. If you’re bad at something, just don’t do it”. This comes from an essay “On Not Being A Foodie”, in which Daum issues this maxim: “One of the great pleasures of trends is the option of sitting them out.”

Daum paints herself as a quitter, a romantic, someone who has lived from delusion to delusion, following whims across the country from New York City to the Great Plains, and finally, to Los Angeles, where she now lives. To hear her tell it, you might not realize that she has authored a novel, (The Quality of Life Report), a memoir (Life Would Be Perfect If I Lived in That House), and of course, My Misspent Youth. She’s also a columnist at the Los Angeles Times, a plum and rare writing position in this day and age. But, of course, no one really feels the weight of his or her accomplishments, just as no one feels grown up. In one of my favorite essays, “Not What It Used To Be,” Daum attempts to answer the question that I believe everyone confronts around age 35: “How did I get to middle-aged without actually growing up?” Appropriately, the essay begins with Daum revisiting the “grown-ups” of her youth: Hope and Michael in Thirtysomething and the cast of the The Big Chill. Watching them, Daum is shocked to realize that these baby boomer characters are all younger than her. Even worse, she finds that she can relate to her parents’ generation more easily than to the millenials: “The vagaries of the digital revolution mean that I have more in common with people twenty years my senior than I do with people seven years my junior.”

“Not What It Used To Be” can be read as a sequel to “My Misspent Youth,” the essay that leant its title to Daum’s debut collection and possibly made her career. Published in The New Yorker in 1999, “My Misspent Youth,” is Daum’s goodbye letter to New York City and to her youth, a city and state of mind she can no longer afford to live in. It’s reminiscent of Joan Didion’s much-imitated “Goodbye To All That,” in which Didion describes what it feels like to fall out of love with New York City. Daum dispenses with Didion’s vague melancholy and gets down to facts and figures, sharing rent bills and Visa debts, letting us in on a truth that thousands of New York’s aspiring writers have since had to face: it is impossible to live in Manhattan (and now Brooklyn) on a freelancer’s salary. To read “My Misspent Youth” now is to see, not only the glimmer of Michael Bloomberg’s Manhattan, but also a certain kind wistful-yet-gritty confessional writing taking shape, the kind of personal essay that prizes self-awareness, but is also defiantly self-indulgent. It’s the kind of essay that will go a little long and will get a little niche, because it can, thanks to the variety and flexibility of literary outlets on the Internet.

Part of the joke of “My Misspent Youth” is that Daum was young when she wrote it, and there was a funny bravado to her premature nostalgia. That bravado is gone in “Not What It Used To Be,” as Daum truly says goodbye to the possibilities of youth:

I am nostalgic for my twenties (most of them, anyway; twenty and twenty-one were squandered at college; twenty-four was kind of a wash, too) but I can tell you for sure that they weren’t as great as I now crack them up to be. I was always broke, I was often lonely, and I had some really terrible clothes. But my life was shiny and unblemished. Everything was ahead of me…I found my twenties to be a time of continual surprise.

Later, Daum stages a conversation between her younger and older selves, in which her older self does not have the heart to tell her younger self that “some of the records you are now listening to — the ones you play while you stare out the window and think about the five million different ways your life might go — will be unbearable to listen to in twenty years. They will be unbearable not because they will sound dated and trite but because they will sound like the lining of your soul.”

I love the romanticism of that phrase, “the lining of your soul” and I love how in this and other essays, Daum is willing to shed her generation’s supposed penchant for irony and talk about the things that have lined her soul. There’s a wonderful appreciation of Joni Mitchell, followed by a mournful essay about Daum’s beloved dog, Rex — two topics that many essayists would probably instinctively avoid. But Daum pulls them off, first by being funny, and second by honestly acknowledging these dual influences. Here’s Daum on Joni Mitchell: “I used to think Joni Mitchell was a big influence on my writing…now, however, I realize that Joni didn’t shape my approach to language as much as my approach to my own emotions.” And here’s Daum on grieving her dog: “No one understands that you cannot answer the phone for a week. No one likes it when you say the barbaric truth, which that because pets occupy a sphere of uncomplicated, unfluctuating love, because their love actually becomes absorbed into the architecture of your home, their deaths can be more devastating than even the death of a close friend or family members.”

Just to throw out a few other Daum-isms—here’s her description of Anthropologie: “A twirling motion in the form of an international brand”. Of Los Angeles: “a place where wildness and domestication are forever running into each other.” Of Nicole Kidman: “a walking Vermeer.” She’s pithy like a newspaper columnist needs to be, but she doesn’t gloss over life’s uncertainties and regrets. In “Difference Maker,” an essay about Daum’s attempts to help foster children who have, in the parlance of the business, “experienced a lot of loss,” Daum confronts her own losses, specifically, her decision not to have children. Even though Daum is secure in her choice, she comes to realize that her efforts at volunteerism are her own “complicated form of baby craziness:”

As wary as I’ve always been of our culture’s rote idealization — even obsessive sanctification — of the bond between parent and child, it seems that I fell for a whole other kind of myth. I fell for the myth of the village. I fell for the idea that nurture from a loving adoptive community could triumph over the abuses of horrible parent.

The sneaky power of cultural myths is a persistent theme in Daum’s work. In the preface to My Misspent Youth, Daum says her essays are about “the romantic notions that screw up real life while we’re not looking.” This may be too pat a formulation, but you could say that The Unspeakable is about the way real life screws up romantic notions. That is, Daum has lived a lot in the 15 years since she published My Misspent Youth, and these essays manage to communicate a great deal of that lived experience. In its own understated, comic way, The Unspeakable is a very ambitious book, one that attempts to chart a personal evolution, while at the same time acknowledging that the idea of personal growth is at best absurd. “I am no wiser or evolved than I was before,” Daum writes at the end of The Unspeakable. She may not consider herself wiser, but her writing in these essays is finer than it has ever been.