Prominent among my childhood memories is the voice of Julia Child. Or rather, the voice of my father imitating Julia Child. Ours was (you’ll be shocked to learn) a PBS household, and the pseudo-Julia arias he would deliver while making Chicken Dish – in that swooping, fluty, Childian soprano – were guaranteed to crack me up, as was his Maggie Thatcher. (Come to think of it, they were pretty much the same impression). And so this year, when the first posters for Julie & Julia began to appear, I thought I knew what I was in for: some laughs, some game-fowl, and Meryl Streep trilling, “Save the liver!”

What the movie and the attendant retrospectives of the real-life Julia Child suggest, however, is less a figure of fun than a figure of liberation. In a country that has never quite outgrown its Puritan pedigree, here was a woman fearless about all things sensual: food, sex, and her own big, lovely body. Seen in this light, Mastering the Art of French Cooking amounts to a kind of manifesto in defense of pleasure. I don’t own that particular book, but Julie & Julia sent me back to Child’s slightly less-famous opus, The Way to Cook, which had been sitting neglected on a shelf in my kitchen. And Julia Child turns out not only to have been a kind of unfussy feminist; she was also a terrific writer.

It’s not often we think of recipes as a form of literature, but they are as formally exacting as the Spenserian stanza (and, as anyone who’s ever ruined $40 worth of lamb knows, the stakes are higher). The Way to Cook is a model of clarity and pragmatism. Moreover, it offers a master class in rhetoric.

In my freshman comp classes, we talk about the three classic rhetorical appeals: logos, pathos, and ethos. Most any piece of rhetoric makes all three appeals simultaneously, but a good rhetor will emphasize one or the other. The first two are fairly easy to grasp; the pathetic appeal (a.k.a. the appeal to emotions) is the mode of contemporary advertising, and is thus ascendant in American discourse. (Death panels, anyone?) Other voices will attempt to correct for widespread abuse of pathos by focusing on the logical appeal (a.k.a. the appeal to reason). Thus, we get liberal pundits reasoning themselves blue in the face: But there are no death panels in these bills! Alas, in cooking, politics, and other inexact sciences, head does not always trump heart. To mediate between the claims of each, we must look to that mysterious creature: ethos.

As I understand it, the ethical appeal has to do with establishing the speaker’s credibility, or the attractiveness of her persona. One approach might be simply to flourish one’s expertise. But, in our postmodern age, the conspicuous display of expertise too easily gives rise to charges of elitism. (Charges which, because they are essentially pathetic, are impossible to rebut.) Contemporary masters of the ethical appeal – among them David Foster Wallace, Jane Jacobs, and my quondam dentist, Dr. Bob Cargill – use the vast resources of voice to make us want to trust them. And how do they do this? By trusting us. By respecting our intelligence. By making a point of showing all their cards and giving a fair assessment of the strength of the overall hand. And above all, by acknowledging that we have the freedom to disagree.

Notwithstanding that overweening title – The Way to Cook – the power of Julia Child’s ethical appeal is that rather than seeking to bully or lecture or intimidate or dazzle us (which, of course, she could) she writes as though we are working in the kitchen alongside her. She allows that there are different approaches to cooking; she frequently suggests that, in her experience, some complication is necessary and some is not. And she does all this with constant, gentle humor. Here is her introduction to game birds:

Since all birds roast in about the same manner, and simmer, sauté, and stew in almost the same way, you’ll find them grouped together that way here, for the most part. It makes more sense, it seems to me; then you have the theory and practice for each technique, whatever your bird happens to be. Actually, it would make even more sense to group the beasts along with the birds . . . but I have resisted carrying logic that far.

Compare to Martha Stewart, a fine writer and cook but an imperialist of logos if ever there was one. Here’s a classic example, first noted by Anthony Lane, of Martha’s single-minded, logical pursuit of the very best:

Locate an area in advance with tender, young, organically grown grass that has not yet been cut. . . . It is best to cut it very early in the morning while the dew is still evident.

It is evident that Martha has lost sight of her context – a recipe for baked ham – and thus of her audience. How much she presumes about us: our lives, our patience, our willingness to go along with her harebrained schemes! Her ham might taste just as good as, or even better than, Child’s, but the cook will feel too humbled, or even belittled, to enjoy it much. 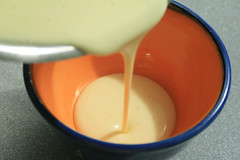 I would suggest that the same principles of ethos that make The Way to Cook so effective – mastery lightly worn and a pronounced solicitude for the reader – might translate well to other fields. Even, perhaps, to literary criticism. A truly great critic has two jobs – to judge and to persuade – but some of our most polished logicians seem sometimes to forget the ethical appeal entirely. Aspirants to the throne of E.M. Forster and Leslie Fiedler could do worse than to study The Way to Cook. Julia Child’s voice on the page proves as indelible as her voice on the tube.