Commissioned by the celebrated jazz recording label Blue Note Records, Dave Chisholm’s new graphic novel Enter The Blue is a whimsical tribute to the origin of the record company and its long and distinguished history recording many of the most influential and iconoclastic jazz musicians—in particular, African American jazz innovators of the 20th Century.

Blue Note Records was founded in 1939 in New York City by Alfred Lion, later joined by his friend, photographer Francis Wolff, two German-Jewish immigrants who launched the record label as a tribute to the Black American music that captivated and inspired them as young men.

Over the course of its history, Blue Note Records has been the first label to record many of the most advanced Black musicians of the time; from such New Orleans-style musicians as Sydney Bechet and Bunk Johnson to the 1940s avant-garde bebop of Charley Parker, Dizzy Gillespie, and Thelonius Monk, and so on through the years right up to the present day.

In Enter The Blue, Chisholm, author of the 2020 graphic bio Chasin’ the Bird, has created a fantasy origin story about Lion and Wolff and the founding of Blue Note. It’s the story of Jessie Choi, a young contemporary female jazz trumpeter, whose mentor Jimmy Hightower, an older jazz bass player, passes out on the bandstand and goes into a coma. Through an encounter with Sherm, an oddball jazz fan, Choi learns about a mysterious state of mind called “the Blue,” a metaphysical realm filled with the musical ghosts of jazz history, where Hightower has been trapped in a paranormal coma-state.

In this 12-page excerpt, Choi and her friend Erin visit Sherm’s apartment where he showcases classic jazz albums to learn about “The Blue” and search for a way to bring Hightower back into the world. Enter the Blue by Dave Chisholm will be published this month by Z2 Comics. 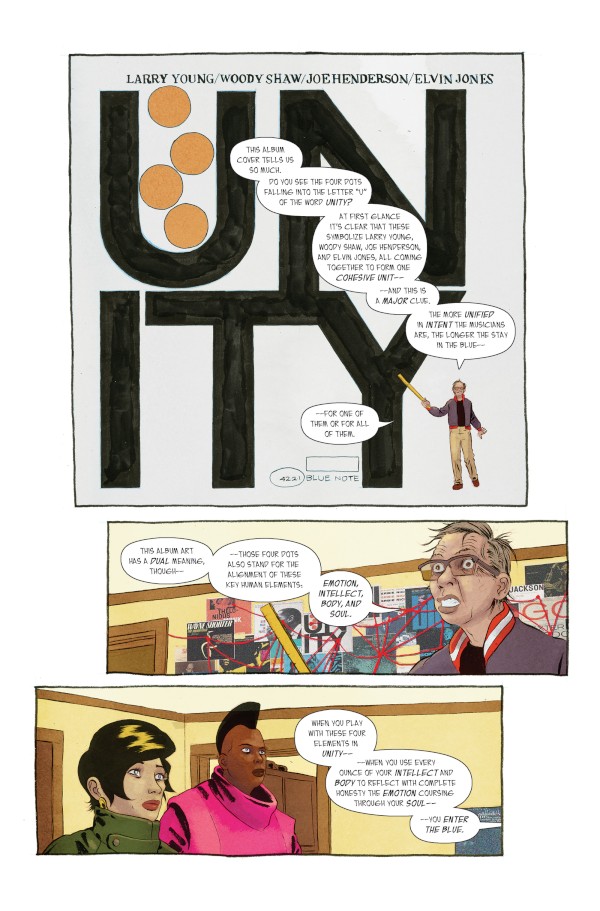