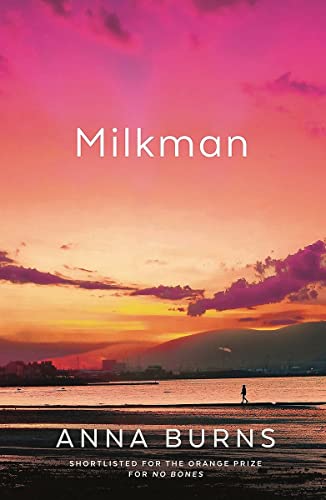 Set in an unnamed city with unnamed characters, the novel focuses on middle sister as she “navigates her way through rumour, social pressures and politics in a tight-knit community.” About her own novel, Burns told the Man Booker website that “‘The book didn’t work with names. It lost power and atmosphere and turned into a lesser — or perhaps just a different — book. In the early days I tried out names a few times, but the book wouldn’t stand for it. The narrative would become heavy and lifeless and refuse to move on until I took them out again. Sometimes the book threw them out itself’.”

In a unanimous decision, Kwame Anthony Appiah, the Booker’s chair of judges, said the experimental novel—which is a novel about a young woman being sexually harassed by a powerful man—was “incredible original” and that “none of us has ever read anything like this before.”

Here are the authors that made this year’s short and long lists.

As many other book bloggers have noted, the illustrious Man Booker Prize longlist was announced today:The Harmony Silk Factory by Tash AwThe Sea by John BanvilleArthur & George by Julian BarnesA Long Long Way by Sebastian BarrySlow Man by JM CoetzeeIn the Fold by Rachel CuskNever Let Me Go by Kazuo IshiguroAll For Love by Dan JacobsonA Short History of Tractors in Ukrainian by Marina LewyckaBeyond Black by Hilary MantelSaturday by Ian McEwanThe People’s Act of Love by James MeekShalimar the Clown by Salman RushdieThe Accidental by Ali SmithOn Beauty by Zadie SmithThis Thing of Darkness by Harry ThompsonThis is the Country by William WallWith four previous winners in the running, the longlist is being hailed as one of the best ever, and it looks like the story this year will be if any of the newcomers can surpass the bigger names. My early pick is the Ishiguro, but we’ll see who the degenerate gamblers favor.As an aside, can I just say that the longlist/shortlist thing that the Brits do is the best way to run a literary prize. The longlist provides plenty of fodder for discussion as well as some insight into the judges’ thinking. The controversy that surrounded last years National Book Award finalists would have been much dampened if that short list had been preceded by a longlist.See also: For complete Booker longlist coverage, visit the Literary Saloon.

The IMPAC Award shortlist was announced last night. The IMPAC sets itself apart with its unique approach. Its massive longlist is compiled by libraries all over the world before being whittled down by judges. This makes for a more egalitarian selection. It’s also got a long lead time. Books up for the current prize (to be named June 11th) were all published in 2007, putting the IMPAC more than a year behind other big literary awards. There’s a distinct upside in this. By now, all the shortlisted books are available in paperback. We’ve also always found the IMPAC interesting for the breadth of books it considers.This year’s shortlist includes a couple well-known names and has a decidedly more American bent than is typical, with four out of the eight shortlisted writers hailing from the States.The Brief Wondrous Life of Oscar Wao by Junot Díaz (Díaz in our Year in Reading)Ravel by Jean Echenoz (at The Complete Review)The Reluctant Fundamentalist by Mohsin Hamid (excerpt, at The Complete Review)The Archivist’s Story by Travis Holland (excerpt)The Burnt-Out Town of Miracles by Roy Jacobsen (in the TLS)The Indian Clerk by David Leavitt (Leavitt in our Year in Reading)Animal’s People by Indra Sinha (excerpt)Man Gone Down by Micheal Thomas (excerpt)

Some of you may recall that the 2004 National Book Award caused quite a stir in newspaper book pages as well as on lit blogs last fall. The judges were decried by some for picking five finalists whose similarities – that all five of them were women hailing from NYC – were hard to ignore, and whose lack of name recognition left many perplexed. Others applauded the judges for making a statement, whether they meant to or not, that a lot of good, award-worthy fiction is not getting the recognition it deserves.With the announcement of the Pulitzer winner on Monday, the four major American fiction prizes (the other two are the National Book Critics Circle Awards and the PEN/Faulkner) have been awarded for 2004 and it’s possible to put the controversial NBA picks in perspective. For starters, I think it’s quite interesting that not a single NBA finalist was recognized by any of the other prizes. It’s possible that there was a backlash against the NBA finalists, but it’s more likely that this year the NBA judges simply took a different course than the rest of the literary establishment.I was especially surprised to discover that Marilynne Robinson’s Gilead, winner of the Pulitzer and NBCC Awards and finalist for the PEN/Faulkner was in fact eligible for the NBA this year, yet was not deemed worthy of even a finalist spot for that award. Now that all the votes have been tallied, it’s clear that the National Book Award judges tried to go in a different direction this year, and no one else followed.