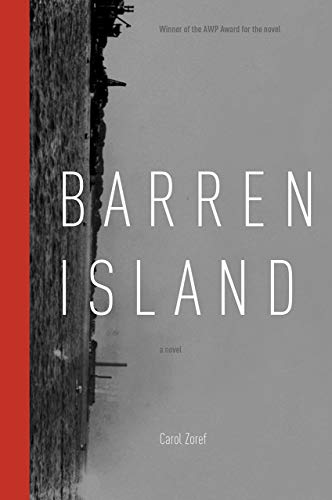 When I heard the news that a novel called Barren Island by Carol Zoref had been long-listed for this year’s National Book Award for fiction, my first reaction was Oof! Had another writer beaten me to the punch?

There can only be one Barren Island, I told myself. It’s a wafer of sand and scrub in New York City’s vast Jamaica Bay, so named by the early Dutch settlers for the bears that may or may not have roamed there, and later destined to live up to its Anglicized name when it became the final destination for the city’s garbage and for its dead horses and other animals that were brought there by barge to be skinned, dismantled, boiled, and turned into fertilizer and glue in the ghastly factories of Barren Island. Those factories were manned mostly by immigrants from Eastern Europe, Greece, Italy, and Ireland, and by African-Americans up from the South. Diphtheria and typhoid epidemics were frequent visitors. The stench and filth and vermin were appalling. “Horrors,” recalls one man who grew up there.

I happened to know this obscure history because for the past dozen years or so I’ve been gathering string, off and on, for a novel I am (was?) hoping to set on Barren Island. Its central character is based on a schoolteacher named Jane Shaw, who rode the trolley from her home in Fort Greene, Brooklyn, to the boat that carried her to Barren Island every Sunday night. She then spent the weekdays teaching the children of the immigrants who worked the factories. She brightened their lives by helping them plant vegetable and flower gardens, sew curtains, dress up homes that were little more than shacks. She bought a piano with her own money, gave lessons, held dances. On Friday nights she returned to her Brooklyn home, where she invited her eighth-grade graduating class to a proper tea every year, the first time many of them set foot off their isolated island. She did this from the end of the First World War until 1936, when the city’s ruthless master builder, Robert Moses, evicted the residents and bulldozed the settlement to make way for his Marine Park project. Jane Shaw got Moses to agree to let her students finish the school year before the bulldozers moved in. The people of Barren Island revered Jane Shaw, which gave me a working title for my novel: The Angel of Barren Island.

So I opened Carol Zoref’s novel with a feeling of—no other word for it—dread. On the very first page I learned that, yes indeed, there is only one Barren Island, and Carol Zoref had beaten me to it. The novel is narrated in the first person by 80-year-old Marta Eisenstein Lane, who is looking back on her coming of age on Barren Island’s smaller, fictional neighbor, Barren Shoal, where her father, an immigrant from Belarus, works in the factory dismantling horses and other dead animals so they can be transformed into such valuable commodities as glue and nitroglycerin. Marta’s tale unfolds amid horrors, tenderness, and beauty that have the iron ring of truth. One day Marta’s mother fails to save Marta’s infant sister from drowning in a washtub full of scalding water. Another day there’s a devastating explosion in the factory. Marta also experiences grace notes, fishing and picking berries, witnessing a rally at Union Square, seeing Tosca at the Metropolitan Opera, tasting first love and watching, from a distance, as the Depression grinds toward another World War. Jane Shaw even makes a cameo. This is Zoref’s first novel, and there is some implausible dialog (and a few unfortunate typos), but it’s an assured and deeply felt work. By the end of the book, my initial dread had given way to delight—that another writer shares my belief that stories from a forgotten place, a blend of the made-up and the real, can be worthy of telling.

After I finished the book, I phoned Carol Zoref in her office at Sarah Lawrence College, where she teaches creative writing. (She also teaches at New York University.) First, I asked Zoref how she became aware of Barren Island. “A long time ago I saw an article in The New York Times about a book about the trash of New York, and it mentioned Barren Island,” she replied. “The article had a picture of a guy who had grown up on Barren Island, and I thought that was an extraordinary thing. So I bought the book and read it. And I had a question: what would it have been like to live there on Barren Island? It’s one thing to work in that sort of setting, but to actually live there as a child, to grow up there, so close to the city and but so far from the city—I just couldn’t imagine what that would have been like.”

Amazing. That newspaper article was my introduction to Barren Island, too. It was written by Kirk Johnson and published on Nov. 7, 2000, under the headline “All the Dead Horses, Next Door; Bittersweet Memories of the City’s Island of Garbage.” I, too, read the book mentioned in the article, Benjamin Miller’s Fat of the Land: Garbage of New York, the Last Two Hundred Years. That book spawned a fascination with the city’s waste that’s still alive today. I asked Zoref, “What kind of research did you do? Did you do a lot of archival stuff? Was it mostly imagining?”

“There was no archival research,” she said. “In fact, I never saw a photograph of Barren Island until the spring of 2016, when the book’s jacket designer and I started talking about what the cover should look like. The public library of New York had just digitized its collection, so I was able to see what the place looked like. Much to my relief, my imagination had served me well. As far as the rest of it was concerned, it was a combination of flotsam and jetsam stuff that I knew but wasn’t exactly sure when it happened. A simple timeline helped. Then looking at photographs, programs on television about the Depression, descriptions of the flora and fauna of Long Island. When I started, I knew the bookends would be 1929, when the stock market crashed, and 1939, when the Germans invaded Poland. What happened between the World Wars? I ended the book a little after Barren Island was actually closed because the coming of World War II is present in the novel the entire time. People are escaping Europe because things are lousy for Jews and they need to get out. People are working these jobs on Barren Island because they’re working any jobs they can get. People are picking through the garbage because they’re starving. Those smokestacks and those rendering plants certainly are waving a flag saying the death camps are coming, and a different kind of oven is coming.”

“What was the appeal of this spot and these people to you as a writer?” I asked.

“The appeal to me had to do with power and powerlessness, and the ways in which the awfulness of quotidian life can’t be escaped. Each of these characters has their own lives and ambitions that aren’t that different from our own in the 21st century.”

One of my favorite characters in the novel is Miss Finn, who teaches in the one-room schoolhouse. “Did you model her on Jane Shaw?” I asked. “Where did she come from?”

“I knew Jane Shaw existed and I knew she stood up to Robert Moses, who I’ve always found an interesting character. I read The Power Broker and I thought, wow, what a brilliant crazy wonderful horrible human being—all those things rolled into one. We wouldn’t have parks if we hadn’t had Robert Moses, but we also wouldn’t have the Cross-Bronx Expressway running through the middle of people’s lives. I couldn’t believe Jane Shaw stood up to him and won. Nobody did that again until Jane Jacobs. Somebody teaching in this one-room schoolhouse could have a tremendous amount of influence. A lot of stuff got tucked into Miss Finn. What happened to these teenage girls in her classes? Well, girls got pregnant and had abortions—long before abortion was legal. It was dangerous and complicated. Miss Finn seems quiet and humble, but she’s worldly in her own way. Her sister was the doctor who performed abortions.”

It was time for me to make an admission. “I read that article in The Times and I read Benjamin Miller’s book,” I said, “and I became totally fascinated by Barren Island. Now I’ve got my own Barren Island box. But I got busy with other things, and my idea of writing a novel about the place went on the back burner. When I heard that a novel called Barren Island was nominated for the National Book Award, my heart dropped into my shoes.”

“So I got your book, and as I read I felt uplifted. Somebody else out there sees the potential of a story about a place, about a moment like this! It’s been an uplifting experience. I guess what I’m trying to say is thank you.”

“Well, thank you. I think there’s no place or no story that exists that wouldn’t be written about differently by different writers. And that’s fine. That’s good. As obscure as things can be, so what? Everyone’s interest comes from a different feeling.”

And I have a feeling, a surprising feeling, that The Angel of Barren Island still has a pulse.

Essays
While Tony Judt wants to see our society reflected in romantic train stations, Alain de Botton actually finds it in the airport.
Essays
Tomas Hachard | 3 books mentioned 7 min read
● ● ●
Essays
“But do you think it’s a good way of training oneself — inventing imaginary news?” “None better.”
Essays
Matt Seidel | 3 books mentioned 1 6 min read
Essays
Essays
I’m on a quest to surround myself with complex mothers. I’m going to seek them in novels, in stories I can enter during months when my own complexity seems to shine brighter. The women I’ll turn to can’t hear me when I talk back to them, but they can be my companions.
Essays
Charlotte Donlon | 3 books mentioned 4 7 min read
● ● ●

Essays
Essays
Essays
● ●
Essays
Reed brought an informed, sophisticated writer’s eye to the kinds of underworlds he observed, and his sense of language was as keen as a journalist’s.
Essays
Matt Hanson | 3 books mentioned 2 8 min read
● ● ●