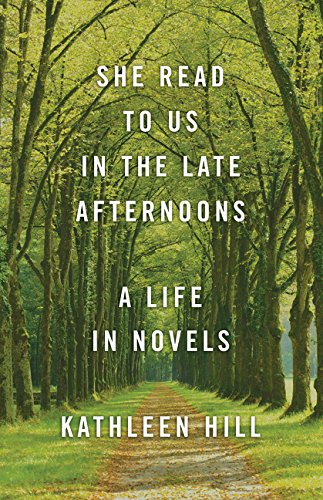 Kathleen Hill is the author of two novels, Still Waters in Niger and Who Occupies This House. Her memoir, She Read to Us in the Late Afternoons: A Life in Novels will appear in late October and is the subject of the interview that follows. She teaches in the MFA Program at Sarah Lawrence. In conversation with Margot Livesey, her writing friend of many years, Hill reflects on the relationship between life and reading, travel and reading, and the difficulties of writing about family and friends.

The Millions:  Thank you for the profound pleasure of She Read to Us in the Late Afternoon: A Life in Novels.  I love how this book combines the autobiographical and the literary, and how each informs, and interrogates, the other.  From the moment I read the opening pages, about the child standing on her head, studying the house supported by its chimney pots, I knew this narrative was going to speak to me, and to many others, at the deepest level.  You write about several wonderful novels. Was one of them in particular the inspiration for She Read to Us?  Was it hard, after many decades of reading, to choose which novels to focus on?

Kathleen Hill: It’s odd, but I don’t think that I actually chose the novels I would write about. It was more that I was visited and revisited by memories of certain times in my life and there, circling in and out of any one of them, was a novel I happened to be reading at the time. For example, when I thought about being 12, I thought of a music teacher and a gifted boy whose life was already marked by tragedy, and all mixed up in that memory was Willa Cather’s Lucy Gayheart.  I couldn’t understand why this should be and wrote the story to find out. So I think of this memoir as first of all a story of a life, about certain moments in the narrator’s life, and how that life is shaped and sometimes altered and even transformed by the novel she’s reading during those moments. I suspect that many readers have memories of this kind.

TM:  I know I do.  Your narrative has several presiding geniuses.  One who emerges early, and who accompanies us throughout the memoir, is Miss Hughes, your charismatic music teacher.  Were you surprised to discover how her words resonate throughout the book?

KH: I was indeed!  I think one of the reasons her words affect the narrator so powerfully is that art and the struggle to lead a worthy life are for Miss Hughes all but inseparable. She listens to Mozart’s requiem when trying to make an excruciatingly painful moral decision. At another time, she leaves behind an absorbing fantasy of her own to turn her attention to the gifted boy who she knows is suffering in terrible isolation. By example, she instructs the other children on how they are to respond by asking aloud if there’s anything they can do for him.  “Because we want you to know that you are sitting in the company of friends.” And she makes a point of telling her students “so that they may not forget it” that for someone else’s suffering they must reserve their deepest bow. For the narrator, at least, her words leave long vibrations.

TM: The epigraph for “Things Fall Apart” is a quotation from Chinua Achebe: “The world is like a Mask, dancing.  If you want to see it well you do not stand in one place.”  Much of She Reads To Us is set outside the United States, first in Nigeria, then in Northern France.  Can you tell us about the connection, for you, between travel and reading?

KH: I think travel—when you are not simply passing through a place but are there for awhile—leaves you very vulnerable, as if you’re a child suddenly going to a new school in a language you don’t understand. Without your familiar props you begin to wonder who you are, how to live from day to day. And sometimes if a book falls into your hands that book becomes a companion during this vulnerable journey. It may reflect the new world you’re living in that you don’t understand and need to. As, for instance, when the narrator is living in northern France and she reads Madame Bovary not only as a beautifully written novel but as a cautionary tale she means to avoid retelling in her own life. On the other hand, The Diary of a Country Priest, also a novel set in northern France, opens her eyes to the lives of the people she passes everyday on the street, to the students she meets in her classroom, gives her a glimpse of their inner lives.  In fact, I think it’s sometimes when we’re most at sea, even desperate, that novels speak to us most strongly, as if our lives depend on learning something from them essential to our own survival.  In a novel we actually see and understand people from the inside, as we don’t ever in real life.  But it’s sometimes that encounter with a character whose inner life is laid out before us, much like an encounter with a stranger we meet in our travels who tells us their story, that confirms a common humanity, that gives us hope.

TM: One of the significant pleasures of She Read to Us is your reticence about other people; for me it makes them more real.  We glimpse your husband, your family, your pupils and fellow teachers, your neighbors, but only in the case of Diana Trilling does another person occupy center stage.  Did you ever worry about trespassing in the lives of people you love?  Was it hard after writing fiction—your beautiful novel Still Waters in Niger is one of my all-time favorites—to be writing as yourself.

KH: Well, this is another strange thing.  Still Waters in Niger was just as closely based on my own life as this one and it’s called a novel. And I was then, just as much as now, writing as myself. I worried in that case about trespassing on my daughter’s life who figures as a character in it. In this book, I worried about trespassing on the narrator’s husband, C.  I try to console myself by remembering that as soon as you write the word “I” you’ve begun to construct a narrator who is different from the self you carry into the world. And so, too, in memoir as well as in fiction, to some degree you make up the characters, the people who appear in your pages. You choose some characteristics of theirs and not others, you find them speaking in ways not entirely natural to them. But that queasiness remains, whether in fiction or memoir, of using the people you know to construct characters.

I guess the way you think about all this depends on what you understand by fiction. The Anglo/American literary world, for instance, makes sharper distinctions between fiction and memoir than the European. Think of French writers, Proust, Colette, Duras, and others like them who might not have been published as fiction writers if they were writing for English-speaking readers. Or else changes would have been asked of them. Or think of the German writers: Sebald or Handke who again play close to the line. Or for that matter Joyce in his Portrait of the Artist.

TM: Throughout the memoir you describe the act of reading, what it’s like to fall into a book, to be taken both out of yourself and deeper into yourself.  All of those descriptions come together in the last section when you describe reading Remembrance of Things Past to, and with, Diana Trilling as her eyesight fails.  It’s exhilarating to hear your account of embarking on this great project and to see you, after several years, reach the end of it.  For me reading has always been connected to my relationship with time.  I wonder if you would agree?  And what would Diana say about this?

KH: Yes, I think Diana would certainly agree with you! And so would I! When we began together to read aloud Remembrance of Things Past the great unspoken question between us was whether Diana would live long enough for us to complete  our project. After all, she was already in her 80s. With the arrogance of youth—I was still in my 40s—I didn’t ask myself the same question. But the great drama playing out in our lives, Diana’s and mine—as we read Proust’s novel in which Time figures so dramatically—was the subject of the novel itself, the furious rush of time. There was Diana’s own struggle with increasing years and the reckoning she was making with her past as she moved closer and closer toward death.  And my own struggle, one that I hope is felt in this section, but that I took care not to address directly, was with the imminent loss of a beloved friend.

TM:  In our secular age it often seems that one of the worst four letter words is “soul,” but I mean it as the highest praise when I say that your memoir embodies Proust’s claim that “Reading is at the threshold of the spiritual life.”

KH: I’m deeply pleased that you think so. But Proust is very demanding! I’m guessing that what he meant by the spiritual life is the unmediated inner life where as solitary creatures we strive to rescue our lost selves—or “souls”—from oblivion, to reclaim the past by paying closest attention to hints and intimations. He believed no book could do that for us. We must do it for ourselves. A particular book breaks in and—to use Kafka’s phrase—“serves as an axe to break the frozen sea within.” It disrupts our life, goes against it in some profound way. We’re left thinking: then who am I? how do I connect with other people and their suffering? With my own? How do I live? How do I love? All these questions rise up and our life is changed. It’s different from what it was before.

Margot Livesey was born and grew up in the Scottish Highlands. She teaches at the Iowa Writers’ Workshop and is the author of a collection of stories, a book of essays and nine novels, most recently The Boy in the Field.