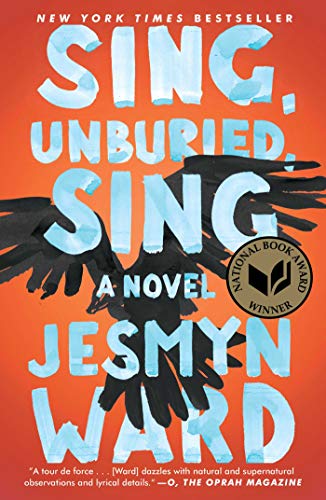 The dead chase the living in Sing, Unburied, Sing, Jesmyn Ward’s new novel about the legacy of trauma. In Ward’s last novel, Salvage the Bones, the main character is preoccupied with the mythological tale of Medea, a woman left heartbroken. Here, Ward traces an American highway odyssey, from the Mississippi Gulf Coast to Parchman Farm, the notorious state penitentiary. Bouncing between the past and present, between ghosts and breathing bodies, between drug-induced fantasy and raw, heartbreaking reality, Sing, Unburied, Sing follows a family that seems to descend from earlier novels like Beloved and As I Lay Dying, uniting past and present suffering.  Ward’s fiction is about inherited trauma in a deeply divided society, where the oppressor and the oppressed share a legacy.

All of Ward’s characters in Sing, Unburied, Sing live with trauma. Pop, the patriarch of the family, grandfather to Jojo and Kayla, remembers his time in Parchman Farm penitentiary and his friend Richie, a young boy who died there. Mam, his wife, is dying from cancer. Their grandson, Jojo, takes care of his younger sister, Kayla, while their neglectful mother, Leonie, deals and consumes drugs. Leonie is haunted by the ghost of her brother, Given, who was shot and killed as a teenager; he appears when she is high, often looking disapproving. When Michael, Leonie’s lover, and Jojo and Kayla’s white father, is set to be released from Parchman, Leonie takes her two children on a journey across Mississippi to bring him back. Along the way, the dead are revived, and they fight to return from the prison with them.

Ward allows the reader to imagine the persistence of ghosts in every facet of this family’s life. Ghosts exist in Pop’s stories, they arrive in a drug-induced haze, they sit like birds on the trees around their home and sing. These ghosts are physical manifestations of the family members’ psyches and symbolic of collective trauma endured by previous generations. They bring with them a restlessness, anger, and desperation—depicted with visceral emotion in the figure of Beloved, decades ago. Toni Morrison’s Beloved, too, was a marker of the pain her mother had endured. But unlike the haunted house in the first few pages of Beloved, where even the sideboard would react to a house’s inhabitants, the ghosts of Sing, Unburied, Sing float, existing as part of the history of a given space without making a direct impact on the space itself. The ghost of Given appears only to Leonie at first, his arrivals and departures indicative of Leonie’s own guilt at her inability to be a good mother and daughter.

While ghosts of the past trouble the present, magic and ancestral mythology eludes Leonie, a loss that stings deeply. Mam, bedridden for most of the novel, is Leonie’s connection to her spirituality, her conduit to her faith. Mam comes to Leonie in her dreams “calling on our Lady of Regla. On the Star of the Sea […] she was holding me like the goddess, her arms all the life-giving waters of the world.” The Lady of Regla, a syncretic Catholic-Yoruba figure, brings mythological stakes to their journey to Parchman, the “Star of the Sea” meant to guide voyagers home. But, unlike The Odyssey, in which the gods and the supernatural often intervene to help the hero along his journey, Leonie and her children face their journey alone. Leonie’s ability to see her brother’s ghost is not a gift, it is a burden weighing down on her through the journey, a source of guilt and remonstrance. Ghosts and supernatural creatures are restricted to imagination and memory in this novel, they cannot intervene. The characters are left to their own devices without hope of supernatural intervention.

The narrative has a persistent tone of hopelessness, much like the mood of the doomed and destructive families of William Faulkner’s As I Lay Dying and The Sound and the Fury. Faulkner’s families were living in a collapsing post-Civil War world where their legacies were in decline. “The reason for living is to get ready to stay dead,” Addie Bundren said, emotions repeated in Sing, Unburied, Sing where the living are engrossed by stories of the dead, and Mam waits for death with resignation.

The ghost story fits into a realistic framework, because Ward places limits around ghostly intervention. These limits allow the reader to question the position of ghosts in relation to the characters. Are they truly present? Or are they in the characters’ minds? Does it even matter when the deeper, larger grief is prevalent in both the living and the dead?

As Baby Suggs says in Beloved: “Not a house in the country ain’t packed to its rafters with a dead Negro’s grief.” Ward’s work is full of stories of the dead, specifically of young black men. In her memoir Men We Reaped, published in 2013, she wrote about the tragic and violent deaths of men in her life, including her own brother.

In Sing, Unburied, Sing, Parchman Farm represents collective grief and trauma, as a space where slavery is still alive and well. Like Faulkner resetting time in The Sound and the Fury, Ward blurs time, inserting memories into the present. “[How] could I conceive that Parchman was past, present, and future all at once?” says one character. The past in Parchman Farm is the main catalyst for the story. Pop relates his experiences there to Jojo in the beginning of the novel, and Jojo is fascinated by this history. For Jojo, Pop’s dark past marks an entrance into manhood, where he aspires to arrive at one day. But for Pop, a man bearing the burden of imprisonment, saving his grandchildren from similar fates is a primary concern. Jojo ultimately faces Pop’s past when he arrives at Parchman Farm. For the older and younger men in Ward’s novels, history lives on in their bodies, and the stories they transmit through them. So Jojo finds Pop’s world not just through his second-hand version of events, but by arriving at the space that imprisoned and traumatized their family.

By invoking Morrison and Faulkner for new readers, Ward excavates not only the suffering of her characters, but also the long tradition of fiction about slavery, fiction that grapples with racial injustice that extends into the present. Often the book relies too much on old symbols. Pop’s memories of Richie and the actions causing the young boy’s death draw almost too heavily upon the inspiration of Beloved.

Suffering is a continuous process of engagement with trauma, facing, fighting, and sometimes succumbing to it. In the foreword to Beloved, Toni Morrison described writing about slavery in a way that kept memory alive: “the order and quietude of everyday life would be violently disrupted by the chaos of the needy dead.” The dead in Sing, Unburied, Sing are needy because they have no choice. Trauma demands attention, yet that attention brings chaos into the characters’ lives. The act of writing and reading such stories also demands that oppressor and oppressed address their positions in an unjust society. Literature and history occupy the same role, as record-keepers of injustice, and of experiences. These records allow us to understand why past and present trauma are ultimately spokes in the same wheel.

Nur Nasreen Ibrahim is a television producer by day and writer by night. Originally from Pakistan, she is based in the United States. Her work has appeared in Specter Magazine, and is forthcoming in Salmagundi Magazine. She graduated from Johns Hopkins University with a masters degree in Writing. Follow her at @Nuri_ibrahim.

Reviews
Visually, the sparse prose and overwhelming negative space leaves a stunning impression. It’s a wonderful experiment in what a book can be, and also home to a mediocre novel.
Reviews
Kevin Nguyen | 1 book mentioned 5 4 min read
● ● ●
Reviews
Blatt’s quantitative approach to literature is novel -- and very entertaining -- but the book is undermined by poor copyediting and methodologies that call into question the conclusions Blatt reaches.
Reviews
Christopher Benner | 1 book mentioned 1 5 min read
● ● ●
Reviews
Reviews