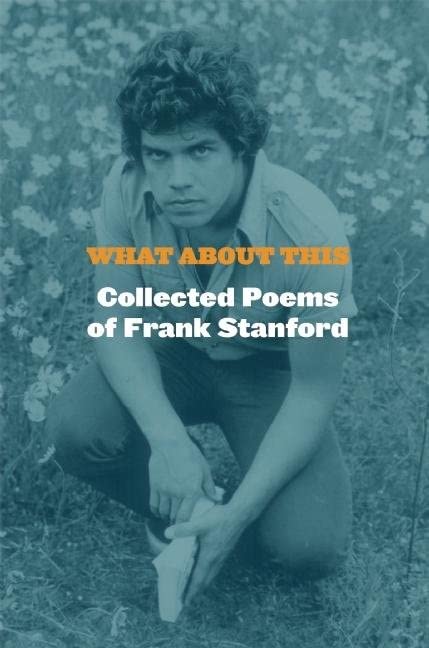 1.
You have to wonder, when considering Frank Stanford, if poetry isn’t a little like science in that individuals matter only in so far as they resemble other individuals. Stanford’s exclusion from anthologies, his obscurity even to other poets, and the sense that, as one reviewer confessed, “it was difficult to explain where [his] orphic power came from,” all contribute to the myth that Stanford, who killed himself in 1978 (aged 29), eluded recognition because he rose de novo from the same Arkansas red soil into which he fell. The additional fact that, as a physical specimen, Stanford was a latter-day Adonis only enhances the myth of his exceptional nature. “His eyes,” wrote a friend, “were soft to the point of bovine.” His wife, Ginny, an artist, recalled that when she first saw Frank “it was like getting hit on the head with a brick.”

There’s truth in the romanticized Stanford: He was undoubtedly a rare and beautiful creature. Some critics classify him as a “swamp rat Rimbaud.” But that’s more cool than accurate. He didn’t really know swamps. He knew levee camps, the dark wooded expanse of rural Arkansas, and the gutted mobile homes of the downtrodden. While the id-leakage and surrealist tinge of his work—all of it available in one volume, What About This—hint at Rimbaud, such qualities evoke more a caricature of Rimbaud than the itinerant absinthe addict seeking literary companionship in the metropolis. That kind of quest was one that Stanford, who would have rotted internally at a New York literary gathering, wasn’t eager to undertake. “I don’t give a shit about a lot of the literary goings on I hear about,” he wrote to the poet Alan Dugan, one of his few reliable correspondents. He brushed aside his better-connected contemporaries as overeducated aesthetes “who school up on theories and shit like minnows.”

Others trying to assign Stanford an influence often suggest Walt Whitman. But what poet with any affection for the hurly-burly of everyday life isn’t classified as Whitmanesque? And Whitman, for all his admirable range and tolerance, would have blanched at the slow countrified violence that marked Stanford’s experience (so different than the hot Civil War gore that Whitman confronted) and informed his early works such as The Singing Knives (1972) and Field Talk (1974). Stanford took a class with Miller Williams, but the only thing I find him saying about Williams (father of Lucinda) is, perhaps affectionately, “that SOB Williams.”

And so it seems fair to suggest that the anxiety of influence—a creative necessity for so many poets—may have failed to penetrate the mobile-homed hamlets where Stanford roamed, rambled, mused, and wrote with prolific intensity.

Hidden Water: From the Frank Stanford Archives (2015) offers a lot to support the thesis.  It suggests that Stanford’s primary poetic wellspring was a radically regionalized and isolated Stanford. This febrile volume, which is essentially a controlled chaos of letters, lists, drawings, scraps, photos, and poems (published and unpublished), highlights the kaleidoscopic flow of Stanford’s all-too-brief poetic existence, an existence ultimately marked by innocence that was, as one friend put it, “smuggled out of childhood.”

As the title indicates, water runs strong throughout Stanford’s poems. But what roils beneath it, what seems to never leave the page, is the steamy subculture of country life, the kind of subculture that, if you’ve never known it directly, can be vaguely imagined by driving though L.A. (Lower Alabama), central Mississippi, or Stanford’s rural Arkansas, and peering beyond the tree walls into weed-choked pockets and piles of poverty and decay.

Stanford worked as a land surveyor. He knew this terrain as well as anyone, and it was into that scrambled wilderness that he went when it was time to encounter (to quote Patti Smith on Sam Shepard) “lonely fodder for future work.” Stanford’s friend Steve Stern noted as much, saying that “to see Frank in the streets of Fayetteville, where I knew him, was like meeting Marco Polo back from Cathay.”

Stanford, a southern poet by temperament and geography, surveyed himself into a literary landscape far away from the conventional southern tradition. “I don’t like Tate and Ransom and that crew,” he wrote to Dugan in 1971, referring to two founding members of the Fugitives, a group who would later, as newly fashioned “southern Agrarians,” publish a bombastic literary defense of the south called I’ll Take My Stand (1930).

In another letter to Dugan, probably written while intoxicated (“I was drunk when I wrote that letter,” he once admitted), Stanford ratcheted up the critique. “I say piss on the neo-fugitives…piss on the Southern Review.” These “scalawags” were nothing more than “exploiters of the truth, the black man, the white. There. I know all this but none of it enters my mind when I write my poems. I have no stand when I write. I write about what I know; what is the truth. I know this other stuff is counterfeit, but they will always have the power. Fuck.”

Stanford’s anti-Fugitive rant follows a much longer passage dealing with race. Stanford wrote, “You probably think I am fucked up with my ‘association’ with BLACKS. This is the way I’ve always been. Most of my life was not spent with white people. My experience, I took for granted. I was actually in high school before it dawned on me I was probably only one of the only white boys in the world who had done what I’d done. This was in 63, when my father died. He told me this.”

Only after making the connection between his upbringing and his deep affiliation with black people does Stanford (before pleading with Dugan “please don’t laugh at what I’m saying”), declare with ineffable tenderness: “I knew I was a poet.”

Other letters, photos, and poems confirm that Stanford’s engagement with African-American culture intensified during adulthood and shaped his view of the world. When he wrote about “what I know; what is the truth,” it was knowledge obviously absorbed through daily interactions with people such as Claude, a black man with whom he’d often share a meal of “whiskey and pigs feet” and spend hours, sometimes days, engaged in discussions.

Some of these discussions were more eventful than others. On Jan. 13, 1972, he wrote to Dugan, “Claude and I were talking about when he used to be in jail down in Louisiana [when] someone started shooting. All his children hit the floor. Claude said, ‘sorry about that Frank, some crazy fool’s been shooting that pistol all week.’” The party went on, though. “For the next few weeks we drink, shoot the shit, play dominoes together. We get drunk and talk about years gone by…in our midnight talks, while listening to old music sessions we talk about how close we have (and others near and far) come to death. It is getting to be a big joke: all the stories of pistols and knives.”

Stanford, born in a home for unwed mothers, was immediately put up for adoption. He never knew his biological father and, as perhaps his affection for Mr. Jimbo Reynolds, an older black man for whom he wrote the poem “Blue Yodel of Mr. Jimbo Reynolds,” had long entertained the idea—or fantasy—that he had black parentage.

The connection between Stanford and African-American culture—an inventory of 119 records in Stanford’ collection, thoroughly jazz and old country blues, includes only two white musicians (Stan Getz and Stéphane Grappelli)—in addition to his outright rejection of the Agrarian legacy and his stern poetic solipsism, suggests a reconsideration of the entire idea of a southern literary renaissance. Michael Kreyling, in his classic study Inventing Southern Literature, writes how “Although I’ll Take My Stand has, since its publication, been taken as a kind of sacred text, and its message a kind of revelation, in fact it serves as a script for inventing southern identity through anxiety.” Stanford embraced a southern identity. But he rejected the many-sided anxiety the Agrarians brought to it. (Stern actually hypothesized that “anxiety was wasted on Frank.”)

In this disposition, I would argue, Frank Stanford was not alone. The “southern renaissance” happened, but it started with the Mississippi flood of 1927 (the hidden water of southern literary history), Blind Lemon Jefferson, Lead Belly, and Skip James more than Allen Tate, John Crowe Ransom, and I’ll Take My Stand.

My favorite photograph in Hidden Water is one of Stanford sitting on the porch with a paperback on his lap (Federico García Lorca). His legs are propped on the railing and his face looks slightly annoyed at being interrupted. Three pairs of shoes surround him, two resting on the railing, one on the porch floor. It’s tempting to see those shoes as a metaphor—the very items that Stanford, in his mysterious “orphic power,” will never fill. But perhaps there’s something else going on in that photo. Perhaps those shoes contain giants who, for far too long, have gone unseen.

James McWilliams is a writer and historian living in Austin, Texas. His articles and essays have appeared in Harper's, the Paris Review online, The New York Times Book Review, The American Scholar, the Virginia Quarterly Review, The New Yorker online, Pacific Standard, Salon, and Slate. He is writing a book about art and expression in the American South called The Wild Beautiful Poets We Grow From The Road.

On Poetry Torch Ballads & Jukebox Music
Poetry and music share a word of process -- composition -- and are linked by negotiations of melody, harmony, rhythm, proportion, and discord. Here is a poetry playlist: 10 poets offer their composition soundtracks.
On Poetry Torch Ballads & Jukebox Music
Nick Ripatrazone | 4 books mentioned 4 9 min read
● ● ●
On Poetry
Wiman has always been a seeker. Survival Is a Style makes this search into song, and it could not have arrived at a better moment.
On Poetry
Nick Ripatrazone | 4 books mentioned 4 min read
● ● ●
Annals of Japery On Poetry
I once had a real-life encounter with a poet at four a.m. in a Las Vegas Denny’s. He leaned over the back of his booth, made some awkward introduction, and began reciting lines from a wrinkled paper about the haunting sound wind makes or some nonsense. This encounter gave me an acute poet-phobia that lasted for years.
Annals of Japery On Poetry
Patrick Wensink | 4 books mentioned 3 4 min read
● ●
On Poetry
● ●