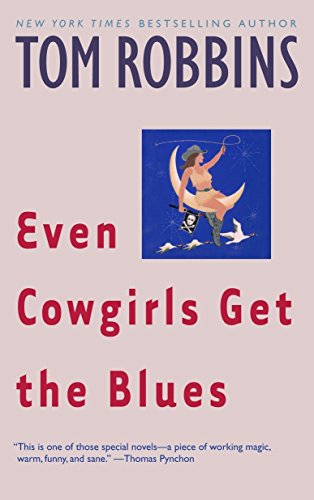 When I was 17, my friend snuck me into a club in Williamsburg, Brooklyn. A girl wearing a fur coat and impossibly tall Demonia platforms eyed me. When she asked my favorite book and I said Invisible Monsters by Chuck Palahniuk, she grabbed my face. “You should start reading real books, like Even Cowgirls Get the Blues.” When I asked what it was about, she said “It’s about everything and it’s about nothing. It’s really simple and it’s really complicated. It’s about thumbs and that’s all you need to know.” I was still trying to remember the title when she leaned over and kissed me. If cool Brooklyn lesbians read Tom Robbins, then I will too, I thought.

The first read electrified me, made me fall in love. I was spellbound by Robbins’s beautiful prose, his crazy tangents, his multi-dimensional characters, his tremendous understanding of human experience. More importantly, I felt represented in this novel: here was a queer, disabled heroine.

Tom Robbins challenges gender roles.  He creates an immensely independent female protagonist: Sissy Hankshaw, a bisexual disabled women who takes the world by storm. She hitchhikes, has casual sex, and is a visibly disabled woman doing modeling. Having been born missing my left hand, the moment Sissy—who was born with extra-large thumbs—said “Well, I’ve always been proud of the way nature singled me out. It’s the people who have been deformed by society I feel sorry for” was a revelation. Seeing her go on to be desired and successful in life and love, I knew I wanted to be just like her.

A second read of the novel in my 20s left me feeling disillusioned; now what once seemed revolutionary seems disingenuous.  Recently, there has been a lot of media conversation around capitalistic feminism, or “feel-good feminism.”  It’s easy to identity overpriced underwear or t-shirts made in sweat shops as examples of this phenomenon, and it’s easy to identify the self-described feminist bro who just wants to sleep with you; but it was a real disappointment to my younger self to discover that Even Cowgirls Get the Blues is a kind of feel-good feminism, too.

It masquerades as a feminist novel.  In a lot of ways, it does it well. But revisiting Even Cowgirls Get the Blues as an intersectional feminist adult is a different experience than when this book blew my mind as a 17-year-old. A second read shows that a lot of its feminism is just like the slogan shirts and pussy hats—feel good. The main problems with ECGTB is that it hinges on Sissy’s beauty, the man who “wins” her in the end, and the “solving” of her disability.

The first thing we learn about Sissy Hankshaw, besides that she has disproportionately large thumbs, is that she is incredibly beautiful. Lots of people desire Sissy. She hits every ark of conventional beauty besides her disability, and becomes a successful model because she’s so beautiful that people “overlook” her difference. First, photographers cover her thumbs in photos; eventually, she gets surgery to fix one thumb. This narrative move shows the multilayered relationships disabled women have with their bodies; it honors Sissy’s autonomy and the desire to change if she wants to. Trying to “fix” Sissy, though a letdown, is an honest and believable depiction of disability. So where’s the issue? Sissy would never have had as good of a life as she does without her good looks. Robbins continually reminds us of her beauty.

Even Cowgirls Get the Blues highlights the complicated relationship between disability and sexuality. Sissy’s disability is critical to the novel’s plot in terms of matchmaking.  When seeing a doctor about her abnormal thumbs, and after the doctor deems her to be totally healthy and not at risk, Sissy’s mom requests that the doctor inform them if an equally disabled boy ever comes into his practice. “Oh Doc, if you should git a boy in here, if a young man ever shows up here with, a young man with ugly fingers, you know…Doc, would you please?” This is something every disabled person is familiar with: the assumption they would only be attracted to or compatible with another disabled person.  Here, Tom Robbins is being responsible in terms of representation.  He’s showing the less fun parts about being disabled. But once Sissy gets older, these experiences are completely erased.

Although Sissy repeatedly shows her independence and strength, some parts of the novel suggest that some of her success is only because of her good looks:

She had given herself completely to the hitchhike because heretofore she had nothing else nor hope of else.  Ah cha cha, but now there was a choice. Or the possibility of a choice.  She was pretty. And a pretty girl can always make her way in a civilized society. Perhaps she should somehow find a job…so that she could return to Dr. Dreyfus for that complex operation; so that she could lead a normal female life.”

This quote suggests that her beauty is the reason for her success. It also commends her for hitchhiking and getting a modeling job, but then expects her goal to correct her physical disability. This quote alludes that a “normal” female life only includes being aesthetically pleasing with no physical anomalies; that after breaching so many invisible lines, she would uncross them to “correct” herself. Sissy’s extreme beauty as a sort of copout. Thinking back to my favorite Sissy quote — “I’ve always been proud of the way nature singled me out.  It’s the people who have been deformed by society I feel bad for” — I realize she is more trustworthy than her creator.

One of Sissy’s love interests is queer woman Bonanza Jellybean. More radical than Sissy, she is so untamable that Robbins must kill her off. She openly scoffs at gender and assumes masculine roles, while wearing a mini skirt. She doesn’t fit neatly into understandings of gender. She might not be as conventionally good-looking as Sissy. And she probably wouldn’t “end up” with a man.  When I read, I felt like Sissy and Bonanza’s sexual chemistry was palpable. I thought they could even fall in love. But Robbins made the tired, cliché move of killing off the lesbian. Was he threatened by what he created? So threatened he had to physically insert himself in the novel? At the end of the novel, Bonanza Jellybean is dead and Sissy is with “Doctor Robbins.”

Sissy is built up, then taken down.  She is normalized, de-sexualized, tamed.  Sissy starts out a revolutionary and ends up a fantasy—tamed by Tom Robbins. Even her disability seems like a narrative quirk rather than the relatable disability I once perceived it as—Sissy is not too disabled, but just disabled enough. I wonder whether Tom Robbins imagined the most palatable queer disabled feminist he could feel comfortable with: one that still slept with men, who could cover her disability.

For all its problems, Even Cowgirls Get the Blues is still one of the most beautiful books I’ve ever read. Books can’t be perfect. But if they’re good, they are transformative for the reader: they help you shape your identity whether your pushing against them or pulling them closer. I would be doing myself a disservice if I wrote off ECGTB for being problematic because then I’d miss all its beauty, hilarity, and wisdom. When I read it again and it didn’t live up to the regard I once held it in, I was heartbroken, but I also knew I was growing. Now I’ve been finding my real life Sissy Hankshaws through personal essays written by actual queer disabled women.

Now that I’m closer to that woman in the fur coat than I am to my 17-year-old self, I’m not sure what I’d recommend as a real book. I’d probably still recommend Even Cowgirls Get the Blues. I’d say “it’s problematic but it’s beautiful.  It might infuriate you but it’ll find its way into your heart.  It’s about thumbs and that’s all you need to know.”

As Peter Morgan’s Frost/Nixon opens on Broadway, I find myself free-associating, as is my habit… in this case, on the subject of presidential fiction.Frank Langella, the actor who portrays Nixon in the play, has spoken in several interviews about the odd empathy he feels for our 37th president, who was by all accounts a psychological mess. The closest I’ve ever come to feeling empathy for Nixon was reading Robert Coover’s The Public Burning. Starring Tricky Dick in his vice-presidential incarnation, this novel about the Rosenberg trial is one of the high-water marks of postmodern fiction. Hell, even JFranz likes it. (I’m joking, Mr. Franzen. Joking.) Aside from its idiom, the book’s major achievement is its main character, who grows more ingratiating as he grows more loathsome. Potential libel suits stalled publication, according to the introduction by William H. Gass. We can only be grateful that they did not prevent it.Nixon’s belief in history as a pageant starring himself seems crucial to the development of a subgenre I’ve been calling, pace Matthew Sharpe, “historical fantasia.” (See recent works by Mark Binelli, Chris Bachelder, and Lydia Millet, for examples). If The Public Burning is a foundational text, Philip Roth’s Nixon novel Our Gang is a minor addition to the canon. Amusing stuff, and interesting as historical artifact, but inessential. Still, it further expanded the range of approaches the contemporary writer may take to historical figures.Straddling the line between fiction and journalism, Hunter S. Thompson’s Fear and Loathing: On the Campaign Trail ’72 harnessed a Roth-like fury to a more revealing analysis of the mechanisms of power. On celluloid, Oliver Stone’s Nixon (IMDb) attempted to get behind the mask, with mixed results. More recently, back in the world of letters, Gerald Reilly’s O. Henry Award-winning story “Nixon Under the Bodhi Tree” was said to explore the life of…an actor getting ready to play Nixon. Which brings us full circle to Frost/Nixon.And what of the other presidents? Gore Vidal had some success with Lincoln, David Foster Wallace notched an early triumph with “Lyndon,” (in Girl with Curious Hair) and DeLillo achieved a then-career-best with his reconstruction of the Kennedy assassination (Libra). I even recall a lovely A.M. Homes story about The Gipper.But the cast of characters in what is arguably the worst administration since Nixon’s strikes me as devoid of literary interest. Practically the only enduring contribution of this crew to America’s writers is its patented brand of cant. George Saunders has mastered the idiom. Hart Seely managed to turn Rumsfeld’s arrogant evasions into a book of poems. I myself, if you’ll forgive the plug, published a monologue called “The Love Song of Ari Fleischer” in 2004. But behind the words lurk people who have, for seven years, refused to grant room for ambiguity, complexity, and doubt – preconditions for the moral universe in which modern literature is possible. Instead, we get a stilted reduction whose protagonists, depending on who’s reading, are either simply Good, or simply Wicked. We get Nicholson Baker’s Checkpoint. We get “Stuff Happens” and “Guantanamo” – bracing theatrical experiences, but not dramas per se. A mark of the current administration’s moral failure, and perhaps of its artistic triumph, is that it has sterilized many of the avenues for protest against itself. It brings out the worst in us, and has, by its relentless aestheticization of every aspect of American life, made the aesthetic feel insufficient. Perhaps I’m wrong. Perhaps some artist or press secretary somewhere is even now working up a giant masterwork that illuminates W as a tragic hero caught on the horns of history. Somehow, though, I’m not convinced such a work would ring true. Anyway, I’m not holding my breath.See Also: HST on the Campaign Trail, Kennedy’s favorite fiction, Clinton’s favorite books.