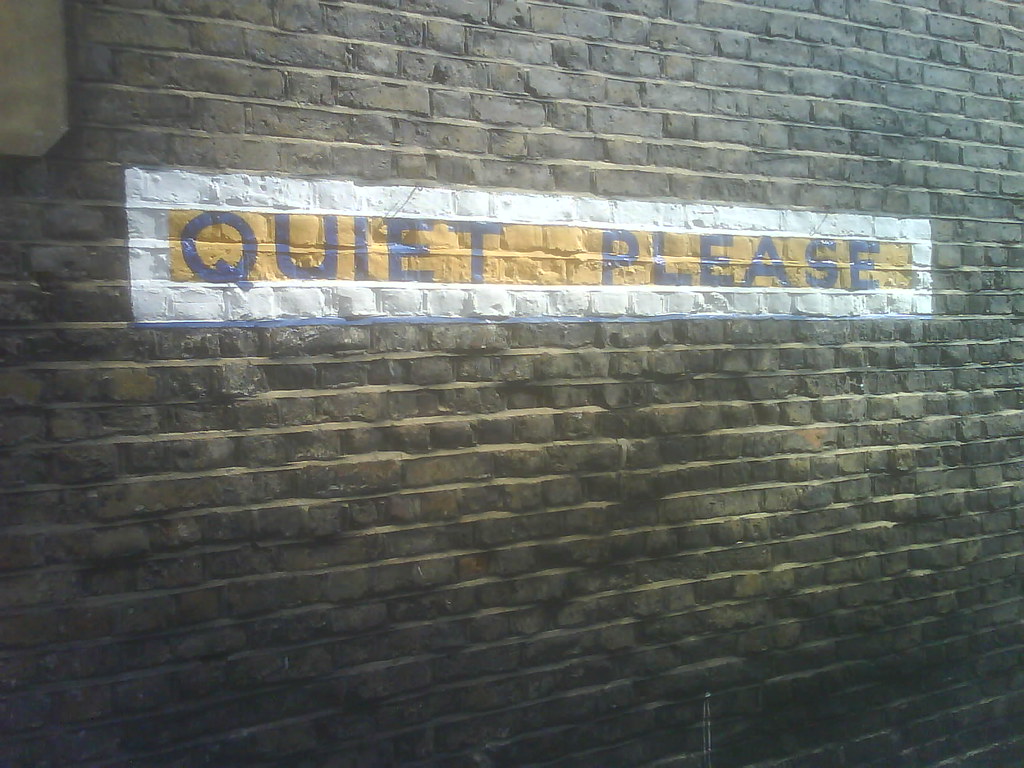 When I was a graduate student working in the philosophy department at Rutgers University, an old academic offered some advice: “don’t talk about your book until it’s published.” Like most other English graduate students, I was writing a novel. I offered that information while giving the man a tutorial on using Microsoft Outlook. My job that semester was to teach the typewriter-clinging philosophers how to use their desktop computers (in 2005).

I had started to tell him that my manuscript was a historical novel set in the American Southwest, but he held up his hand and told me to stop. He said the worst thing a writer could do was talk about his work before it was finished. “You’ll talk about it enough after that.” He said this was also true for works of scholarship, even though chapters had to be published on their own. But that seemed like a necessary evil for him. He was adamant that a fiction writer should never talk about his book until it hits the shelf. “Otherwise,” he said, “you’ll kill it.”

When Esquire published a story of mine a few years after that, I offered a proclamation in my bio note: “he’s working on a novel set in southern Vermont.” That was true. I was working on it, in the sense we devote significant hours of our lives to books. I taught during the day, went to an MFA program in the evening, and wrote late into the night. I typed, drafted, revised, printed, tore-up, trashed, and re-started a book.

But I never published that book. Like other ditched efforts, it sits in a folder titled “Vermont Novel” on an abandoned laptop in my basement. It shares that electronic graveyard with the historical novel, hundreds of short stories, and a few poetry collections.

Between 2011 and 2015, I had 7 books published by small and scholarly presses. It is fun to say that you are having a book coming out. It is fun—and more than a little self-affirming—to share images of your book contract, your cover design, and your page proofs. During those years, I was always working on a new book. To have a forthcoming book meant to be alive as a writer.

Publishing is not writing. Writing is what you do at midnight. Writing is what you do, as William H. Gass says, “to entertain a toothache.” Writing is casting your voice into a world already filled with noise. Writing is an act of faith, rebellion, and hope. Publishing is a world outside of yourself. In many ways, that is a good and necessary thing. Writers need editors. Editors help writers turn their ideas into stories; they help writers reach audiences. Yet publishing is also a place where writers must learn to cede control and embrace patience; a place where failure is likely.

Publishing is a marathon, not a sprint. When your book comes out, shout it and sing it from the rooftops. Be proud of what you’ve accomplished. Don’t worry about people being sick of hearing about your book—you’ve scrolled through their daily posts about food and politics. They can handle some literature.

But until your book is published, don’t talk about it. That old academic was right: you risk sucking the life out of your book. If you talk about your book, it stops belonging to you, and starts belonging to the world. You’ll have to explain it to people you sit next to on the train, distant cousins at family reunions, or people at work. When the soul of your book hits the air, it will dissipate without its physical body.

Until then, hoard your manuscripts. Keep your secrets. Delete your tweets about your work in progress. Play coy in your bio notes. Be devoted to your book, and resist the urge to whisper about your relationship to others. Stay committed to that book, and one day—when the time is right—you can tell the world.

Am I writing a book now? That’s between me and my hypothetical manuscript. I’ve learned to keep my mouth shut, hunker down, and get to work.

I noticed that in the past few days several people have come to this blog after searching Andrei Codrescu and hurricane. Codrescu, a Romanian poet, writer and NPR commentator, is a favorite of mine and when I realized that he makes his home in New Orleans, I became worried that he might be missing. I’m guessing that those searching for him on Google are worried, too. In an interview a little more than a year ago Codrescu, like so many others, dismissed the threat to New Orleans:Standaert: You live in New Orleans, which could be submerged in a matter of a few short hours if a ‘category five’ hurricane hits the city full bore. Does this frighten you? Sorry if I brought it to mind! I’ve heard other residents say with a devil may care wave of the hand that it would be appropriate if New Orleans was Pompeii-ed, Atlantis-ed, or otherwise Sodom and Gomorra-ed. Are these people nuts? Or does living in New Orleans breed a laissez faire attitude toward eminent apocalypse? Is it the decadent caramelized, sugar powdered, steaming apple beignets?Codrescu: So what’s living in San Francisco like? Or L.A.? Or New York? Or anywhere on the path of Comet from Hell? Be serious, Mike. This just ain’t a safe universe. People in New Orleans get great pleasure out of possible disaster just like Venetians do: they are in a hurry to make beauty because they are so close to the elemental (fury) gods. But anyone who decided to be boring because they live on a rock under the desert, is either crazy or hasn’t taken enough LSD. Or they may just be boring, which is incurable. There is nothing sicker than a bunker.I was relieved to hear that Codrescu is safe and in Baton Rouge. Yesterday he mourned on NPR. Like so many others he is both chastened by the wrath of Mother Nature and angry that his beloved city has been destroyed.

Over at the LBC, this week’s topic of discussion is Stephen Graham Jones’ post-modern horror novel Demon Theory. It’s a must read for anyone who likes footnotes with their hockey masks and chainsaws.

Today, while I was driving, I caught a review of Triangle: The Fire That Changed America by David Von Drehle on Fresh Air. It was a very favorable review (in fact the book has been getting great reviews in most places). I would love to read the book and comment on it here, but I can’t forsee myself getting to it any time soon. And therefore, I won’t get to talk about it here. The stack of books is just too high. Yet I happen to have an advance copy of Triangle, and I hate to see it gather dust. So here is my idea: whoever among you would like to read this book and put together a little review or comment or whatever on it for this site, email me and I will send you the book. Then I was thinking, I am lucky enough to have access to advance copies of books from time to time, and wouldn’t it be great if I could pass them along to people so they can write a little something which I can then post on The Millions. It sounds like good fun to me. So… if you would like to review Triangle for The Millions email me and I will send you the book. (By the way Triangle is about the Triangle Shirtwaist fire, an unconscionable tragedy that proved to be a watershed event in improving working conditions [and especially working conditions for women] in America.) As I get other new books, I will offer them up for review as well. Also, if you happen to have access to review copies of books, and would like to help stock my guest review program, well, that would be really sweet.

Barnes & Noble is buying used books. They’re marketing it as a way to sell your old textbooks, but they’re buying other books too. They’ve set up a simple site that lets you check titles and find out if they’ll take them and how much they’ll pay. You then send your books to Barnes & Noble and they cover the shipping. As far as I can tell, the prices are fairly comparable to what you might get selling your books to your local used bookstore, maybe even a little better.

Another comprehensive collection by a short story master is hitting shelves this week. Bradbury Stories is a collection of 100 stories by, who else, Ray Bradbury. Aside from being delightful reading, this collection displays his mastery of the form, providing whatever “proof” might be necessary that Bradbury diserves to be considered one of our best writers. Here’s a good interview with Bradbury from The Onion.A Letter to ThailandHere’s a letter to my friend Cem. He’s world travelling and I thought I might recommend him some books.Cem…Checking in. Southern Turkish still in Northern Thailand I presume. From my little hammock of paradise, it’s hard to imagine your jungle roamings. I don’t know if you have the time to read or the ability to acquire these books, but I’ve got two more for you: War Is a Force That Gives Us Meaning by Chris Hedges. He talks about the effect of national conflict on individuals, and, more specifically, he explores his own addiction to war, which has led him around the world. Also, I’m reading a surreal mystery novel called Bangkok 8 by John Burdett. As the title suggests, it’s set in the country where you hang your hat.It’s all picnics and baseball here in the states. I hope you’re enjoying an appropriate Thai substitute.Dreaming of Ships,Max[Note: These books are great for the general populace, too. Not just world travelers]

I have an article in the newest issue of Poets & Writers. It’s about the publishing industry’s recent interest in doing business in China and in bringing Chinese writers to the rest of the world.Not unlike European explorers five hundred years ago, the U.S. publishing industry is looking for a route to China. And, like those explorers, each company seems to be setting a different course. HarperCollins recently partnered with a Chinese publisher and plans to release new and classic Chinese books in English translation in the United States, the U.K., and China. Penguin has also secured a local publishing partner and is already offering Chinese readers ten of its Penguin Classics in Mandarin – and it has an open-ended plan to bring out more. At the same time, Penguin has stepped up its efforts to release more Chinese literature in translation in Western markets. Macmillan, meanwhile, has started a new publishing division, Picador Asia, based in Hong Kong.

It’s either a sign of the impending apocalypse or an easy out for all those aspiring writers trying get their first book written. A business called “Book by You” lets you… Enjoy the adventure of starring in your very own personalized novel! You co-author our books by providing the names, features and places to include in your personalized novel. These novels are full-length, 100 to 199-page books that look and feel just like a classic paperback novel.The fact that this business exists pains me on many levels. (via Sean)