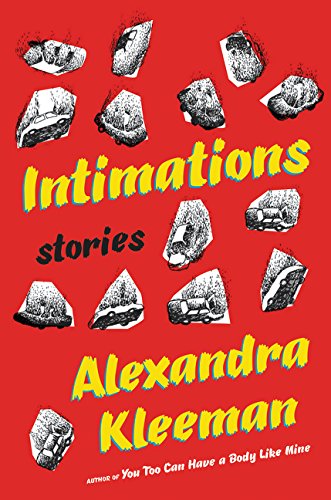 A minor lapse in comprehension caused me to believe, for about the first half of this collection, that I was reading a book called Imitations. I liked that title (though the actual one, Intimations, is more than adequate), because it struck me as slyly self-aware, particularly when applied to an author’s first story collection. (Kleeman’s debut novel, You Too Can Have a Body Like Mine, was published last year to great acclaim.) Writers learn to write stories by imitating their influences, and Kleeman’s collection is more mindful than most when it comes to sampling the various traditions of American short fiction.

The book is divided into three sections (which promotional material describes as “birth, living, and death,” though that is an oversimplification). The first offers a set of surreal stories that feature characters floundering under the expectations of others. In “Fairy Tale,” the narrator might be describing a dream: she is at a dinner with her parents and a man who claims to be her fiancé, though she does not recognize him and feels no attraction to him. As the story proceeds, more and more men show up at the table, each claiming to be a boyfriend or lover or paramour, and the pressure for the narrator to choose one leads to increasingly extreme scenarios. In “The Dancing-Master,” the eponymous instructor is goaded by the village philosopher into teaching a feral boy to dance like a proper gentleman: “Portesquieu would claim that this is impossible, that a body cultivated in the wild assumes the essence of wildness, turns swampy and will not admit of the growth of more refined habits. But with my labor, I prove him wrong: my wild child dances the minuet on command, as well as several other current dances.” The dancing-master achieves his pedagogical aims through use of a rod. When left to his own devices, the poor wild boy much prefers to chew on whatever objects are available. In their cold, fantastic minimalism, these first stories recall the work of Aimee Bender or Robert Coover (whose lengthy blurb, given its own page at the beginning of the book, functions like an oddly self-referential epigraph).

Section two begins with a suite of stories following the trials of a woman named Karen. “I May Not Be the One You Want, But I Am the One For You” finds her attempting to write a profile of a humane dairy farmer shortly after breaking up with her boyfriend. She meets a German man in a cafe and the two begin an awkward flirtation. “Choking Victim” flashes forward half a decade, when Karen is now married to an architect and the mother of an infant daughter. She attempts to acclimate to life in a new city, but finds she is forever at odds with her surroundings. “Jellyfish” skips back to the day the architect, Dan, proposed to her, while on vacation at a resort in a developing country where the seas are plagued by blooms of jellyfish that unnerve the swimmers. These stories are naturalistic, if quirky: more Rivka Galchen than Bender. Kleeman proves herself an skilled conjurer of familiar life. In “Choking Victim,” Karen observes the hacking cough of an unseen neighbor: “The coughing continued, louder and more urgent. It grew and solidified simultaneously, like a skyscraper seen from an approaching car.”

The section ends unexpectedly with “Intimation,” a nightmarish parable where an unnamed narrator finds herself trapped in a dynamic house with a man who seems to think that they are in a relationship. Though the story reverts to the surrealism of the first section, after the three Karen stories it is difficult not to read this narrator, too, as Karen (or a version of Karen), and to interpret the story not simply as an allegory for marriage in general but for Karen’s marriage to Dan (or her awkwardness with the German). What’s more, the piece invites the reader to think back to the stories in section one, particularly “Fairy Tale,” and insert Karen into those narrative as well. Like an avocado pit surrounded by malleable flesh, the Karen stories orient the pieces around them, providing the reader a notion of center.

The third section is more similar to the first than to the second, though categorized less by anxiety than by full-blown desperation. In “Fake Blood” a woman arrives in costume to a non-costume party, where her bloody outfit is construed by the other guests as evidence of a murder mystery game. Their belief in such a game causes people to misinterpret the real murders that begin to occur, even as the narrator attempts to convince them otherwise. The disjointed vignettes of “Rabbit Starvation” use the conceit of fluffy whiteness to explore the existential horror of aberration and loneliness, from a cotton ball sorting facility to accounts of Robert Falcon Scott’s fatal South Pole expedition to the thoughts of a person trapped in a room full of rabbits: “Stack the rabbits. Number the rabbits. Place a fingertip on the nose and stroke from forehead over spine to the tip of its adorable puff. Regret and regroup. Enumerate the possibilities. Write messages in the sky.”

The final story, “You, Disappearing,” is a dystopian tale of a world laid waste by the incremental disappearance of objects: apples, trousers, magazines, parts of Ferris wheels. “Nobody thought the apocalypse would be so polite and quirky. Things just popped out of existence, like they had forgotten all about themselves. Now when you misplaced your keys, you didn’t go looking for them.” But pets disappear as well, as do people, memories, even entire concepts. The narrator is unnamed, though she is in love with an architect. They are unmarried, without children, torn apart by the disparate ways they react to a world in which the disappearance of all things is inevitable. “There had been times,” the narrator writes of her boyfriend, “when I thought I might be with you indefinitely, something approaching an entire life. But then when there was only a finite amount of time, a thing we could see the limit of, I wasn’t so sure. I didn’t know how to use a unit of time like this, too long for a game of chess or a movie but so much shorter than we had imagined.” The story is perhaps the collection’s strongest, benefiting not only from the intimacies of this unnamed couple, but from the accrued emotions of all that has come before it: the lives (or potential lives) the reader has lived with Karen, lives which will not occur in the world of this final tale.

It is interesting that Intimations should appear so shortly on the heels of the American publication of Claire-Louise Bennett’s Pond. Though the books are largely dissimilar, they both take well-established strategies for giving a novel an innovative kick and apply them to the medium of the short fiction collection. (Some reviewers have referred to Pond, which is composed of self-contained short stories, as a novel. They are mistaken. Mislabeling a linked short story collection as a novel does a disservice to both forms.) In the case of Pond, Bennett adapts the accumulating, knot-of-language aesthetic used successfully in the works of David Markson and, more recently, Eimear McBride. Kleeman, on the other hand, is working in the surrealism-neighboring-naturalism tradition of preceding wunderkinds like Téa Obreht and Jonathan Safran Foer, where sections of dreamlike allegory supplement sections telling the primary “real life” story. These tropes, when employed by novelists, have grown to feel quite domesticated over time, anchored as they are to book-length narratives that mostly guarantee a sense of progress by the end. In applying them to story collections, Bennett and Kleeman have essentially thrown out the instruction manual, allowing the reader to assemble whatever larger narrative they are able, knowing it will be incomplete and that there may even some parts leftover.

Save for a few standouts, the stories are not as strong, individually, as their original publications (The New Yorker, The Paris Review) might suggest. Several pieces obstruct more than they aid in explication. At 40 pages, “A Brief History of Weather” is a collection within a collection, divided into titled sections that follow a family’s attempt to create a house immune from and absent of any weather. It feels like Kleeman’s attempt to create her own Cooverian fragmentary epic (à la “The Gingerbread House” or “Seven Exemplary Fictions”), but the motifs are a bit too spasmodic and numerous (games, Russian dolls, unattributed quotes, an invented twin) to add up to anything coherent. The ethereal “Hylomorphosis” reads (purposefully) like a piece of 16th-century angelology that, while initially promisingly, refuses to solidify into anything digestible for mortal readers. Even the Karen stories are rather unexceptional when removed from their context in the book. Cumulatively, though, the collection offers an experience that is more surprising and, in some ways, more provoking than that of a standard collection composed of better stories. Kleeman is masterful at the sentence level. At the book level, she is ambitious and inventive. Once she works out the interstitials, she’ll be spawning imitators of her own.

Michael Deagler 's fiction has appeared in Glimmer Train, New England Review, Electric Literature's Recommended Reading, and elsewhere. He was a 2016-2017 fiction fellow at the Fine Arts Work Center in Provincetown, Mass. His website is michaeldeagler.com.