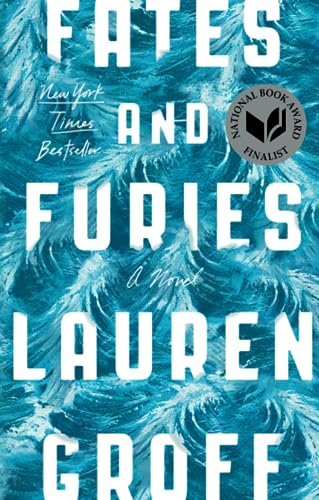 Lauren Groff’s Fates & Furies, just out in paperback, tells the story of a marriage.

Fates and Furies shows how two people can misunderstand each other over time. Lotto and Mathilde live their lives together, but they inhabit completely different worlds. In this way, the novel has a similar dynamic to Twitter. People tweet messages at each other while also inhabiting completely different worlds. Though on the social network major miscommunications take only 140 characters to unfold, in both a true connection remains elusive.

So what if Lotto and Mathilde were both to tweet? Without the luxury of 400 pages in the novel, Lotto would need to activate all his advantages given the limited space, whereas Mathilde would need to cut short her passive aggressive ways.

If you have read Fates and Furies, you might question whether a private person like Mathilde would ever expose personal details in a forum designed for public consumption. Under usual circumstances, she would not. But she’s always made an exception for Lotto and his wicked sense of timing. And he, in turn, has made a life of luring her in.

But would high-born Lotto join Twitter? I’ll remind you that he is an actor in a playwright’s hide. He’ll never not be vain. The legendary indexer Earl Sprague’s memoir, Invitation to a Subheading, is to be published this month by the Freelancer Union Press. In it, Sprague lyrically recounts the arc of a brilliant career spanning medical textbooks to presidential memoirs. As if that weren’t thrilling enough, there’s a further enticement to pick up a copy. Sprague’s longtime professional rival, Thor Henderson, agreed to index his hated colleague’s memoir, possibly signaling a détente between the two fiercely competitive lions of the industry. How fitting that their notorious feud end via the healing powers of a well-constructed index, which Indexer’s Weekly proudly presents here in full.

Acknowledgements: family, i.; Index Association of the Americas, ii.; my notable absence from, i.-iv.

Amateurs: perils of hiring, 6; inability to distinguish his work from, 37-9.

Battle Cry of Freedom: Yankee bias in indexation of, 218.

Henderson: my surname, 8; passive-aggressive misspelling of, 17.

Index finger: evolution of, 95; how one little finger changed the world, 97; representation in art, 99.

“Hell is other people,” according to the three characters in Jean-Paul Sartre’s play No Exit. In Sartre’s vision, eternal damnation is mental, rather than physical, torture. Inez, Garcin, and Estelle have been selected to antagonize each other. Stuck in a gaudy, cramped room without any glass, they become each other’s mirrors. Inez is cunning and abrasive. Garcin is pensive but frail. Estelle is vain. They are terrible people, but terribly entertaining characters.

Sartre uses each character’s anxieties as weaknesses. Inez hates Garcin because he is a coward. Inez lusts for Estelle, but Estelle only has eyes for Garcin—merely because he is the only man available. Garcin is too busy thinking about what is happening on Earth to pay attention to Estelle, and she loathes being ignored. Their methods of torture are simple, cyclical, and eternal.

Each time I read Sartre’s claustrophobic play, I wonder: who would be my torturers? I won’t admit the two actual people who would vex me in a Sartrean Hell, but I will admit the two characters in literature who would annoy me forever: Stephen Dedalus and Anse Bundren.

If I were stuck in a Second Empire drawing room with no exit for all eternity, my torturers would definitely be Stephen and Anse. I love both A Portrait of the Artist as a Young Man and As I Lay Dying because I detest the central characters of both books.

Since A Portrait of the Artist as a Young Man traces Stephen’s development, the text hews to his melodramatic sense of self. James Joyce’s method is sound—Stephen’s acquisition and mastery of language, as well as his skepticism toward his surroundings, are captured in the novel’s narrative style—but Stephen is taxing on the reader. He’s a jerk. He writes a noxious villanelle (“Are you not weary of ardent way, / Lure of the fallen seraphim.” Really?). Each prosaic moment of his existence must reflect some ancient Irish myth.

What irks me most is his glib disbelief. I’m a Catholic who knows that doubt is endemic to faith, but Stephen’s rejections—“I will not serve”—are couched in language that elevates his importance. He renounces God because he thinks himself to be God. He has become his namesake, the great artificer. Like many lapsed Catholics, Stephen is—in the words of his friend Cranly—“supersaturated with the religion in which you say you disbelieve.” But Stephen dismisses that belief as a stepping stone toward his real goal: “I will not serve that in which I no longer believe whether it call itself my home, my fatherland or my church: and I will try to express myself in some mode or life or art as freely as I can and as wholly as I can, using my defence the only arms I allow myself to use—silence, exile, and cunning.”

I can’t stand him.

This was all Joyce’s intention, of course, but that doesn’t diminish how much I hate Stephen. I imagine him leaning against a bookcase, arms crossed, huffing well actually forever and ever while the door to my Hell remains shut.

Anse Bundren is also terrible, but for different reasons. He’d sit in the center of the only couch in Hell, and spread his knees so that nobody else could fit. He’s selfish, lazy, and a hypocrite. His inert state is such a perfect contrast to William Faulkner’s profluent story in As I Lay Dying—a tragicomic journey story. He begins the book sitting on his back porch, “tilting snuff from the lid of his snuff-box into his lower lip, holding the lip outdrawn between thumb and finger.” Behind him, his wife Addie is dying. In front of him, his son Cash is building Addie’s coffin.

Anse is full of excuses: “he tells people that if he ever sweats, he will die.” He’s also full of complaints, calling himself a “luckless man.” He promised Addie that he would bury her in Jefferson with the rest of her family, but it soon becomes clear that he has other reasons for making the trek. His children don’t respect him because he doesn’t deserve it. And he’s quick to offer empty religious intonations: “The Lord will pardon me and excuse the conduct of them He sent me.” Get over yourself, Anse—and quit jabbering about your new teeth.

Certainly the central traits of Stephen and Anse that I most detest—self-importance and selfishness—are the two traits I pray that I never hold myself. Great literature has a way of making us recognize our own faults after we’ve first criticized them in others.

Who would be your literary torturers in Hell?