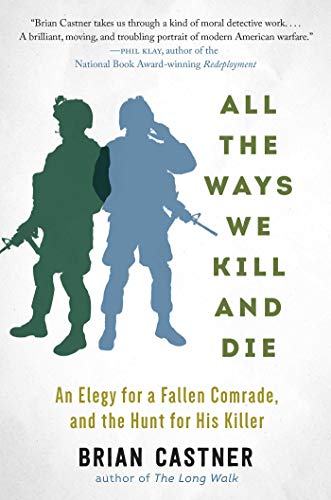 The enemy knew he could not defeat us on our own terms. The conventional battlefield was ours, the sky as well. So they made us bleed one body at a time — limb by limb — through the use of handmade bombs. If there is one tribe of the military that knows this tactic best, it is the explosive ordnance disposal (EOD) technicians charged with combatting it. Brian Castner spent eight years leading EOD teams, including two tours in Iraq. The harrowing aftermath of that period of his life was well-told in his memoir The Long Walk; his latest work of nonfiction, All the Ways We Kill and Die, continues the memoir’s narrative while displaying Castner’s considerable talent for both in-depth reportage and more imaginative forms.

Castner opens the book with a prologue that imagines the detonation of an IED in Afghanistan from the Taliban perspective — a detonation, we learn a few pages later, that takes the life of his friend and EOD comrade Matt Schwartz. Castner, five years out of uniform and now a writer and freelance journalist, asks the question the book seeks to answer: “Who killed Matt Schwartz?” From there, the narrative loops in ever-widening arcs through a structure that roughly mirrors an EOD team’s post-blast actions. Collect the dead. Tend the wounded. Gather evidence. Hunt. Remember.

If there is risk inherent to the structure of All the Ways We Kill and Die, it is that its polygamous marriage of imagination, memoir, and reportage runs the risk of throwing off a genre-monogamous reader. There’s as much for the armchair military history buff in Castner’s exploration of IED technology and tactics as there is for fans of literary nonfiction. The early chapters are fairly traditional narratives, Castner retracing the impacts of personal losses ranging from his dead friend to maimed comrades. But by Part III of the book, Castner must link disparate narratives from both Iraq and Afghanistan while keeping an eye on how he imagines a kind of IED archetype, this “Engineer” he suspects took Matt Schwartz’s life. The surreal rhythms of a drone pilot, a firefight documented through passages of military Internet relay chat — these are the disorienting signs of a disappearing center, as Part IV reveals how we hunt and kill.

The book is not a cut-and-dried war story; its conclusion is appropriately ambiguous considering the open-ended nature of the wars my generation has fought. Novels and memoirs by service members that address their time in Afghanistan or Iraq have not benefitted from the sense of closure granted veteran writers of World War Two, or even Vietnam. Where writers like Joseph Heller (Catch-22), Eugene Sledge (With the Old Breed), Tim O’Brien (Going After Cacciato) and Phil Caputo (A Rumour of War) could look back at the U.S.S. Missouri and the Fall of Saigon with respective clarity; novelists Matt Gallagher (Iraq, Youngblood) and Elliot Ackerman (Afghanistan, Green on Blue) need only peruse the Internet for unnecessary reminders that both wars drag on today. Memoirists have fared similarly. Both Brian Turner’s My Life as a Foreign Country and even Castner’s The Long Walk could only conclude by narrowing the lens to a hyper-personal focus. A former soldier lies in bed. A former EOD officer performs therapeutic yoga. There is no definitive ending when the events that shaped your story are still unfolding.

“Long and Messy and Gray” is the book’s narrative climax, and details the lifeline of an EOD troop turned lethal contractor whose name Castner redacts to “M_____.” Highly fragmented, but crafted so as not to bewilder, its nearest cousin is that brilliant piece of Vietnam writing, “Illumination Rounds” from Michael Herr’s Dispatches. And it is the perfect final lift to a bracing narrative. George Packer noted in his New Yorker essay “Home Fires” that “fragments are perhaps the most honest literary form available to writers who fought so recently.” I contest the efficacy of a word like “honest” in this context; had Packer applied the word “effective,” the statement would prove more meaningful. “Long and Messy and Gray” might watershed the most effective personal war narrative structure I’ve encountered; the denouement that comes in Part V is necessary, but it’s this chapter that is most compelling.

All investigations, war-related or not, begin with a simple question and best of intent. But as Serial showed us last year, building a complete picture is about sorting through the puzzle pieces and assembling the mosaic as the meaning of each fragment appears. If, like M____, one returns to war dozens of times, the narrative must necessarily shatter each time. Within this frame, Castner shares the same creative space as Serial’s producer, Sarah Koenig. Certain pieces belong together, neatly assembled for the reader to observe. Other pieces, however, belong in a pile, appearing as they are overturned. There’s an art to this type of transient work, a sense of structural mastery just beyond the page that is all the more inspiring when you consider that both Castner and Koenig began with just one question: “Who?” The best writers fully admit that the best stories reveal themselves along the way. The best stories, as it turns out, might end up answering a different question altogether.

“Who killed Matt Schwartz” is the least of the questions answered within the pages of All the Ways We Kill and Die. Castner captures the complex push and pull; the cost and reward; and a fully formed image of what it’s been like to be both in the middle, and on the periphery, of The Forever War. Despite this wide lens, however, Castner’s real task is to tell an intensely personal story. In the closing chapter, we find him walking the forest with his children, pointing out roots, ruts, and creeping vines that threaten their peaceful stroll. I imagine him pausing, pushing a knee into the rich brown earth and pointing ahead once more: danger there.

Matthew Komatsu is a graduate of the University of Alaska MFA in Creative Writing, the recipient of a 2017 Alaska Literary Award, and the creative director for the state's only veteran-civilian writing workshop, Danger Close Alaska. This essay represents neither official policy nor position, and for more of that, visit his website: matthewkomatsu.com.

Essays Reviews
Reviews
In writing about a novel like 'The Fishermen', I find myself in a dilemma. I loved it. I'm tempted to make a grand claim about this book, but which should I make?
Reviews
Claire Cameron | 9 books mentioned 3 4 min read
● ●
Reviews
I’m going to wager that George Scialabba is the best political critic you’ve never heard of.
Reviews
Morten Høi Jensen | 9 books mentioned 4 5 min read
● ●
Reviews
● ●

Reviews
Bachelder’s portrait of middle-class, middle-aged males revolves around football. Full disclosure: In my version of hell, scowling football coaches pace up and down the River Styx, their steady barking of martial commands only interrupted to consult their laminated sheets on which every possible variation on the off-tackle running play is written.
Reviews
Matt Seidel | 9 books mentioned 1 6 min read
● ● ●
Reviews
Failure—damned if you do, damned if you don’t—is built into the double bind of black womanhood.
Reviews
Ellen Wayland-Smith | 9 books mentioned 7 min read
● ● ●
Reviews
Young God is a strong entry in the tradition of the Southern Gothic Novel (redneck noir subcategory), but, while reading it and after watching True Detective, I began to wonder if the genre still has any explanatory power for contemporary America.
Reviews
John Yargo | 9 books mentioned 5 min read
● ● ●
Reviews