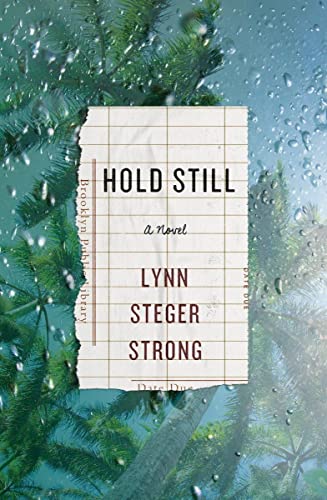 Lynn Steger Strong’s debut, Hold Still, joins a spate of recent novels that explores lost girls and their mothers. Some of these books feature tragic, deceased girls, while others feature heart-rending girls who though not physically lost, have lost themselves. Their mothers, all of them white, share certain characteristics around abandonment — some have been abandoned by one or both parents, some become abandoners. Like their daughters, these mothers have a tendency to lose themselves. For the girls and mothers in these books, losing one’s way is signified by lightness/thinness.

Hold Still’s protagonist is 21-year-old Ellie, who suffers alcohol and drug abuse, along with what appears to be crippling depression. Ellie feels lost to her family, and far more consequentially, to herself. Alternating between 2013 and 2011 when a terrible event happened that overshadows the book, Hold Still unfolds through earlier flashbacks. Ellie has a younger brother and a father, but most prominent is Ellie’s mother, Maya Taylor, an English professor at Columbia. As a young girl, Maya was abandoned by her mother. Maya’s father, inadequate and inappropriate to the task, died while Maya was in her early 20s.

A similar pattern emerges in Celeste Ng’s Everything I Never Told You, to which Hold Still is compared on its book jacket. Ng’s novel opens with the death of 16-year-old Lydia and unfurls in lyrical, painstaking detail. Early on, Ng poses the question —

Lydia’s mother, Marilyn, was herself a lost girl, her father having abandoned the family. At Marilyn’s wedding to a man of Chinese descent, Marilyn’s mother makes unforgivable racist remarks. “That was the last time Marilyn saw her mother,” thus rendering Marilyn parentless.

Long before she dies, Lydia loses herself trying to satisfy her parents’ projected desires. She fakes friendships to feed her father’s zeal for her popularity, while she fakes school to fulfill Marilyn’s thwarted dreams of a career in medicine. As the circumstances surrounding Lydia’s death grow more mysterious, one thing clarifies — Marilyn’s temporary abandonment of her family is foundational to the drama.

Sari Wilson’s Girl Through Glass also contains a lost girl and a thread of maternal abandonment. Girl Through Glass is narrated from the twin standpoints of adult and child by a former ballet student named Mira. When Mira is a tween, her mother abandons her, moving from New York to California. Mira’s father remains on hand, but he’s not paying attention.

Yes, her mother was gone — but, like a girl in the fairy tale, [Mira] has been given a substitute.

Mira’s mother substitute is a shadowy 47-year-old man, who proves neither fairy godmother nor godfather. Mira loses the dream that is congruent with herself — becoming a professional ballerina — and thereby loses herself. Girl Through Glass is Mira’s adult struggle to embrace her past mistakes and forge a way forward.

Consider Nancy Reisman’s stunning Trompe L’Oeil, which plumbs the aftermath of four-year-old Molly Murphy’s death in a traffic accident in Rome. Despite efforts to stay together — the Murphys have two more children — the family slowly unravels. Reisman writes with captivating musicality, masterfully exposing the innards of the disintegrating Murphy family.

Molly’s mother, Nora, does not abandon the family. Instead, she remains at the center, growing lighter and lighter. She declines social invitations, because

Nora could imagine herself on a small olive-shaped boat crossing the pool of a martini glass, but not at the cocktail party itself.

Nora’s lightness feels like an indispensable coping mechanism. Floating through life, she is able to bear with grace her evolving grief over her daughter, the loss of her husband, and her family’s endlessly mutating need for her.

Perhaps it is no surprise that thinness wafts through Girl Through Glass; Mira is a rising ballet star, with the attendant fixation on body type. She and her fellow students “are being molded into the stick-thin hipless Balanchine ballerinas.” If there’s a fairy tale at work here, it’s “more like Hansel and Gretel.” Wilson pings the lost girls:

A brittle finger bone, a threat of fire and oblivion, a trail of receding crumbs disappearing in the woods of a vanishing child-self.

So too, lightness is a trope in Hold Still. Graduating Harvard, Ellie’s mother, Maya, “felt weightless, lost.” Ellie, frequently seen through her mother’s lens, is “perfect-looking” at age 12. At 17, Ellie is very thin. “Maya’s daughter’s hips jutted out from underneath the satin string that connected the front and back stretch of fabric that still covered her.” And Ellie’s own observation as she stands naked in front of the mirror: “Her hip bones jut out below her abdomen.”

“Eating disorder memoirists love to fetishize hipbones,” Katy Waldman writes in a plea to reject anorexia’s false narratives and focus instead on its biologic causes. Noting that “starving silences who you really are,” Waldman puts Virginia Woolf and a host of literary luminaries (Emily Dickinson, Anne Sexton, Sylvia Plath, Louise Glück) in the anorexia “clubhouse…a clique of brilliant madwomen bent on self-destruction.” In Hold Still, Maya is a Virginia Woolf scholar; she never goes anywhere without her copy of To the Lighthouse. “Virginia,” Maya says in praise of Woolf, is the “presence of the absence.”

Maya has a strong dose of self-abnegation. She runs compulsively, leaving at 4:30 a.m. to run with her son; routinely running great distances from Brooklyn to Manhattan. And she has a self-punishing streak:

There was something constantly off-putting about the ease with which her in-laws existed in the world…They…seemed to feel as if they had a right to all the pleasures they’d been given, while Maya sat most days waiting to be punished for all that she had somehow managed to acquire.

Nevertheless, Hold Still is not an eating disorder memoir, and none of these books is about anorexia. What does jump out, however, is the undercurrent of lightness/thinness among these lost girls and their mothers.

Earlier this year, Mattel tried shaking things up with three new Barbie body types — one curvier, one taller, and one petite — as well as a long overdue assortment of skin tones. According to The New York Times, “Mattel executives have struggled to rebrand Barbie as an aspirational figure, one not so closely identified with her unnatural body measurements.” Hate to break it to you, Mattel executives, aspiration is the problem. To what should girls aspire when an entire culture, including a culture of smart literary women, values them for how little of them there is?

Intelligence and education were not enough for Marilyn in Everything I Never Told You. The birth of her first child permanently disrupted Marilyn’s Harvard (Radcliffe) education and her trajectory to medical school. Nor were they sufficient for Harvard educated Maya in Hold Still.

Lightness/smallness in Hold Still seem to pertain not only to body size, but to a way to navigate through life. If you can slip through the cracks without engaging too much emotionally, you have the possibility of avoiding pain. Maya chose Virginia Woolf, in contrast to her friend Laura’s specialty — “all those Frenchwomen and their feelings.” Feelings are dangerous when your mother abandoned you and your father only made it worse. At her Harvard graduation, Maya “waited for some feeling to come over her, and some sense of what might come next.” That divorce from feeling characterizes Maya’s daughter Ellie as well, and ultimately spells trouble.

Ellie’s journey in Hold Still is a disturbing slide through aimlessness, moving inexorably toward more abusive sex and drugs, while her family looks on helplessly. No combination of psychotherapists and tough love seem to make a difference. Finally, her family sends Ellie to Florida to take care of Annie’s little son, Jack. Annie is an old friend of Maya’s, whom Maya mentored. In parallel with other women in these books, Annie says, “I reconciled myself to not having a mother a long time ago…Long before my actual mom died.”

Ellie’s attachment to Annie’s son initially holds the promise of providing stability. Maya and Ellie stay in close touch, as if relieved to be sharing the mundane details of childcare rather than all the ways that Ellie has tripped up earlier in her life. Inevitably, however, life in Florida unleashes new dangers.

Hold Still drills down on emotions, and the lack thereof. Throughout the novel, one emotion that Maya owns, and owns powerfully, is her love for Ellie. Mother and daughter are so conjoined that Maya’s carefully curated New York life falls apart in parallel with Ellie’s in Florida. (Spoilers prevent further elaboration.)

Maya’s love for her daughter endures, the opposite of lightness and avoidance. On the contrary, it is anchoring, if fraught. Maya describes her feelings about Ellie in her journal:

Sometimes I say out loud to myself or type it, the thing you did…I try to imagine a world in which I hate you. I try to see if I’m capable of letting you go…What makes me angrier than the thing you did is the impossibility of the idea of not loving you because of it.

In Hold Still, that tortured, grounding love serves as the necessary glue between mother and daughter. And that, perhaps, is the bottom line.

Martha Anne Toll ’s essays and reviews appear regularly on NPR Books and in The Millions; as well as in the Rumpus, Bloom, Narrative Magazine, [PANK] Magazine, Cargo Literary, Tin House blog, The Nervous Breakdown, Heck Magazine, and the Washington Independent Review of Books.  Her fiction has appeared in ​Catapult, Vol. 1 Brooklyn, Slush Pile Magazine, Yale's Letters Journal, and Poetica E Magazine among others. Martha is also the Executive Director of the Butler Family Fund, a path-breaking social justice philanthropy focused on criminal justice reform and housing and homelessness.  Martha tweets at @marthaannetoll.