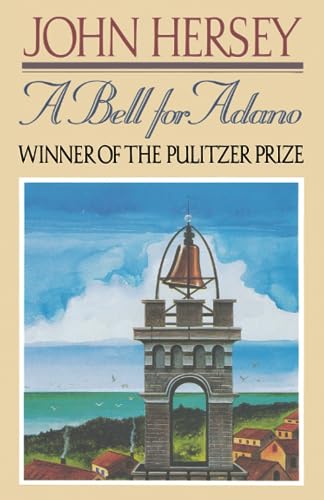 The American war novel, in popular mind, carries three defining traits. It needs to be big. Tome-like, something that’d make Ernest Hemingway and James Jones and all those dead, mustachioed alphas brood with envy. It should skew light on emotion (that’s what subtext is for) but be heavy on descriptions of the natural world. Trees, sand, mountains, et cetera. All beautiful in ways people cannot/will never be, because, sigh, the human heart confounds. And there’s got to be bullets and blood, trauma and ruin. War stories demand it. It’s what makes them war stories.

Then there’s John Hersey’s neglected classic A Bell for Adano. Its credentials as a war novel are certainly bona fide — it’s set during the Allied occupation of Sicily in the midst of World War II, opening with the line “Invasion had come to the town of Adano.” The credentials of the author are bona fide, too, as Hersey served as a celebrated war journalist on the European front as well as in the Pacific. (He’s perhaps best remembered for his reportage from post-atomic bomb Hiroshima for The New Yorker.)

Though a force in its time — it won the 1945 Pulitzer Prize and was adapted into a film starring Gene Tierney — A Bell for Adano hasn’t endured the same way other war novels of that era have, perhaps because it defies the traits mentioned above. It checks in at a breezy 200ish pages, and reads faster than that. Passages of the Sicilian town and countryside are few and far between, giving way to lengthy dialogue exchanges and (gasp!) even sequences of plot. As for the bullets and blood, the closest thing to combat described in the book is an errant fishing boat being blown apart by a sea mine.

But make no mistake, A Bell for Adano is a war story through and through. More specifically, it’s a story of military occupation. The book’s foreword introduces Maj. Victor Joppolo, U.S. Army, a good man the unidentified narrator implores upon the reader, and more importantly, a capable one. Joppolo has been assigned as the administrator to small, coastal Adano. He’s the head occupier, though you wouldn’t know it for much of the first half of the book — he stumbles, he blunders, he fails. But he also learns. He immerses himself into the governance of the town, from the duties of the police chief to those of the priests to those of the fishermen. He ignores an order from higher that bans carts, the lifeblood of the local economy, risking his own career. And while his right-hand Sgt. Borth begs him to “remember the alleys, sir, clean the alleyways,” Joppolo dreams grander: weeks prior to the Allied invasion, Benito Mussolini melted down the town’s 700-year-old bell for rifle barrels, the bell that once warned Adano the ancient king of Naples was invading. Joppolo aims to find a worthy replacement for that bell, first for his own ego and legacy, then for the town itself.

I suspect that all reads rather quaint, belonging to a time and place when American foreign intervention was both clean and just; martial invasion and occupation carry dark associations for us in 2016. And Joppolo, a true believer in democracy and an idealist, never questions the mission’s purpose or intent, something his contemporary equivalents in the armed forces (both the real and the fictional) would find puerile at best, and deeply stupid at worst. But the messy ambiguities of the human condition resonate throughout A Bell for Adano, most noticeably when Joppolo’s rigid principles confront the confusion of everyday life in post-fascist Sicily. Throw in a love story involving Tina the fisherman’s daughter with a hint of scandal (because, umm, Joppolo has a wife back home), and it doesn’t matter that Hersey’s war story defies the war novel traits. It just matters that it’s interesting and forceful and good.

For all its merits, A Bell for Adano is not a perfect book. Hersey sometimes falls into the stilted language that can happen when even an excellent journalist tries his hand at fiction, like he’s writing left-handed. Minor characters are sketches, speeches are didactic, and there’s a lack of emotional texture that’s pervasive. Sicilian stereotypes run rampant, from the dandy town crier to Tina’s “welcoming” sister. And for all his absurdity, the Gen. George S. Patton stand-in hasn’t aged well: caricature and legend have coalesced too fully by now. A moment of tenderness is what the general needed on these pages, not more foolish rage.

As an Iraq vet who first read A Bell for Adano after leaving the army, I couldn’t help but reflect on my training and reading assignments prior to our deployment upon finishing it. We raided a lot of mock houses, shot a lot of balloons and silhouettes, and read true stories of valor and bravery. I value all of that, still, because it contributed to my men coming home, to me coming home. But we didn’t study or talk much about moral courage. And that mattered a lot over there, and it’s what Hersey focuses his novel on, at the expense of more standard war tropes. “You see,” the narrator writes in the novel’s foreword,

the theories about administering occupied territories all turned out to be just theories, and in fact the thing which determined whether we Americans would be successful in that toughest of all jobs was nothing more or less than the quality of the men who did the administering…only men can guarantee, only the behavior of men under pressure, only our Joppolos.

There’s not much of meaning or lasting worth that can be gleaned from the wars in Afghanistan and Iraq, but perhaps evidence that America’s just not very good at occupation qualifies. We’re awful at it, actually. Maybe that’s due to the nature of our all-volunteer military force, separate and distinct from the nation that wrought it. Maybe it’s because our military isn’t, in fact, a foreign constabulary. Maybe it’s because Gen. George C. Marshall was right when he said, “A democracy cannot fight a Seven Years War.” Regardless, it’s important to know such wasn’t always the case, even if whatever it is we’re doing now feels like a far cry from pushing back a fascist onslaught. Moral courage still matters. Only our Joppolos, indeed.

Matt Gallagher is a former U.S. Army captain and Iraq war veteran. His debut novel Youngblood will be published in February by Atria/Simon & Schuster.

Reviews
The strange euphemism “Prisoner of War” eventually comes to describe every character in the book.
Reviews
Editor | 1 book mentioned 7 min read
● ●
Reviews
These are evil men, but Gay makes certain that we never forget that they are men, made of the same hope and fury and flesh as us.
Reviews
Aboubacar Ndiaye | 1 book mentioned 5 min read
Reviews
● ●
Reviews
● ●