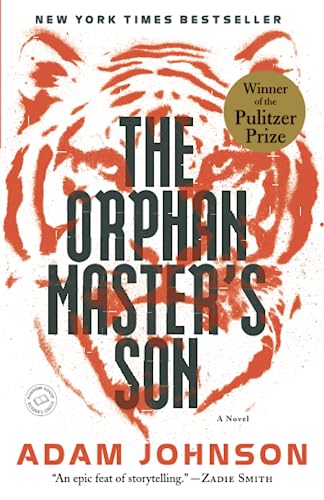 When he set out write The Orphan Master’s Son, his 2012 novel set in modern North Korea, Adam Johnson faced a seemingly insurmountable problem: Very little is known in the West about daily life in modern North Korea. The government of the ruling Kim family pumps out a constant stream of propaganda, but nobody believes a word the country’s official news agencies say. More accurate information comes from defectors, but residents of the capital city of Pyongyang, where much of The Orphan Master’s Son is set, rarely defect. Even when Johnson wangled a rare visit to the country, his government minders never let him out of their sight and ordinary citizens wouldn’t risk looking at him on the street, lest they arouse the suspicions of the country’s brutal secret police.

Johnson’s solution was to write The Orphan Master’s Son as speculative fiction, mixing the facts he was able to gather with his own fertile imagination to create a fictive world he calls, for the sake of convenience, North Korea. Just as is the case with most speculative fiction, many of the underlying facts of this fictive world, such as North Korea’s vast system of gulags and the government’s bizarre ban on owning dogs in the capital city, are real. But many other details, such as a gruesome program to drain the blood of dying prisoners to provide fresh blood for healthy citizens elsewhere, serve as literary metaphors for life under totalitarian rule.

After Johnson’s surprise win of the National Book Award last week, many readers will be rushing out to buy the winning book, Johnson’s 2015 story collection, Fortune Smiles. But readers new to Johnson’s work may also want to make room on their Christmas wish lists for The Orphan Master’s Son, a brilliant, compulsively readable novel that blends the fine-grained emotional texture of literary fiction with the big ideas and world-building pleasures of the best speculative fiction.

At the heart of The Orphan Master’s Son, which won the 2013 Pulitzer Prize, is Jun Do (“John Doe”), a young North Korean raised in a work camp for orphans. In the first section of the novel, which reads like a dystopian thriller, Jun Do joins a secret government unit tasked with kidnapping valuable foreigners and bringing them to North Korea. When he succeeds at that, he is sent to language school to learn English and assigned first to work as a spy stationed on a fishing vessel and then as a translator on a diplomatic visit to a senator in Texas.

The antic disaster of Jun Do’s sojourn in the American heartland sets the stage for the novel’s far more ambitious and strange second half, a cockeyed love story told in standard third-person narration, intercut with a heartbreaking first-person tale of a gung ho government interrogator, and the creepily chirpy voice of the government’s propaganda office piped via loudspeaker into every household in the country.

For much of this section, Jun Do is either under interrogation by the state’s secret police or an inmate in a barbaric prison mine, but Johnson leavens the bleakness of his hero’s daily existence with breathtaking narrative leaps and deftly understated dashes of barbed humor. In one of the chapters narrated by the propaganda office, the voice reminds its listeners that the loudspeakers serve as a vital early warning system in the nation’s still-simmering war with its American-backed southern neighbor:

“The Inuit people are a tribe of isolated savages that live near the North Pole,” the voice explains.

Their boots are called mukluk. Ask your neighbor later today, what is a mukluk? If he does not know, perhaps there is a malfunction with his loudspeaker, or perhaps it has for some reason become accidentally disconnected. By reporting this, you could be saving his life the next time the Americans sneak-attack our great nation.

When you stop laughing, you realize this is precisely the sound of a police state quietly, gingerly tightening its ideological stranglehold on its population.

In a recent New York Times article, Alexandra Alter noted that, with his Pulitzer and National Book Award wins on successive books, Johnson joins an elite literary club of consecutive prizewinners that includes the likes of Philip Roth, Saul Bellow, Wallace Stegner, and Eudora Welty. Of these four, only Roth is still alive and he is now retired. Johnson, on the other hand, is 48 years old, with just four books behind him. If there is a more promising writer at work in the U.S. today, it would be hard to name him.

A confession: I haven’t read much Henry James. I read Daisy Miller in college, along with a few of James’s better-known short stories. Later, maybe in grad school, I took a run at one of his novels, though I can’t say I remember which one, or really much else about it except that the sentences seemed to go on for days and I gave up after only a few pages. Reading James made me feel dumb, and while I recognize that feeling dumb is a necessary part of learning new things, there’s only so much time I’m willing to spend struggling to read a book that makes me feel like an idiot. As a consequence, I have lived a James-free existence for the last twenty years.

Given that, I would have figured I would be the last person on earth to enjoy Colm Tóibín’s 2004 novel The Master, a fictionalized account of Henry James’s life from 1895 to 1899, which sounded to me like a highbrow Behind the Music-style wallow in the fields of Jamesiana. But I was wrong. While I’m sure a serious Henry James head would get more out of The Master than an ignoramus like me, I found myself both riveted and deeply moved by Tóibín’s novel despite, and perhaps even because of, my lack of knowledge about Tóibín’s subject.

For me, and for I suspect a lot of contemporary readers, Henry James is something of a blank slate, a cardboard cutout of a nineteenth century Dead White Male Author, essentially interchangeable with any number of DWMAs of the period, from William Dean Howells to Anthony Trollope, whose work I feel slightly embarrassed about not having read. Oddly, this turns out to be a perfect starting place for an author creating a fictional character. Because Tóibín is writing about a real historical figure whose significance is a given, he can skip all the boring expositional scenes that would persuade you that his main character is, despite his limitations, worthy of your interest.

But because he is writing fiction, Tóibín can also dispense with the narrative distance of biography and bring you directly inside that powerhouse of a mind as James tries to make emotional and moral sense of himself. That James fails, and ends the book unable to love anyone outside the pages of his own fiction is his tragedy, but the fact that you care about him anyway, that you spend more than 300 pages hoping James will break free from what Tóibín calls “the locked room of himself,” is Tóibín’s triumph. I have never cared so much about a character I liked so little.

One of the few things I knew about Henry James going in was that he is widely perceived as being the poster boy for the closeted gay Victorian, and because Tóibín is openly gay and because I have no imagination, I assumed The Master would drag poor Henry kicking and screaming out of the closet. Indeed, Tóibín’s James is powerfully attracted to men, and spends one deliciously ambiguous night cuddling naked in bed with a boyhood friend, the future Supreme Court Justice Oliver Wendell Holmes. But as masterfully as Tóibín handles James’s struggles to keep his homosexuality latent, the central relationships in the book are with women – first with James’s cousin Minny Temple, who died young, and later with fellow novelist Constance Fenimore Woolson, who committed suicide at least in part because James could not return her love for him.

In these cases, we watch the usually imperious Henry James get positively tiddly with puppy love, and later, when these women need him, we watch in horror as he coldly cuts them off, leading, perhaps indirectly, perhaps not, to their deaths. Then, a bit ghoulishly, he begins to write them into his books. In Minny’s case, he calls her Daisy Miller and has her die in Rome. A few years later, he calls her Isabel Archer and marries her off to a caddish snob named Gilbert Osmond, with whom she lives unhappily in Italy. Tóibín writes:
He wanted to take this penniless American girl and offer her a solid old universe in which to breathe. He gave her money, suitors, villas and palaces, new friends and new sensations. He had never felt as powerful and dutiful. … There were scenes he wrote in which, having imagined everything and set it down, he was, at moments, unsure whether it had genuinely happened or whether his imagined world had finally come to replace the real.
Thus, the problem for Tóibín’s Henry James is not that he is a closeted homosexual, or that he is incapable of feeling love. He feels love profoundly, for women and men alike, but he can’t act on it in any way that might compromise his freedom as an artist, and instead he pours out his love for them in his novels after they’re dead. That, in this case, his love for Minny Temple gave us The Portrait of a Lady may be enough for some. It isn’t for me. As much as I care about books, I think people matter more in the end.

But what makes The Master such a compelling read is that Tóibín has a subtler mind than I do and can see both sides of the question with equal sensitivity. He doesn’t shy away from the human destruction James leaves in his wake, but he also brings James alive on the page, not as a monster or emotional cripple, but as one of the great minds of his age expressing love the only way he knows how.