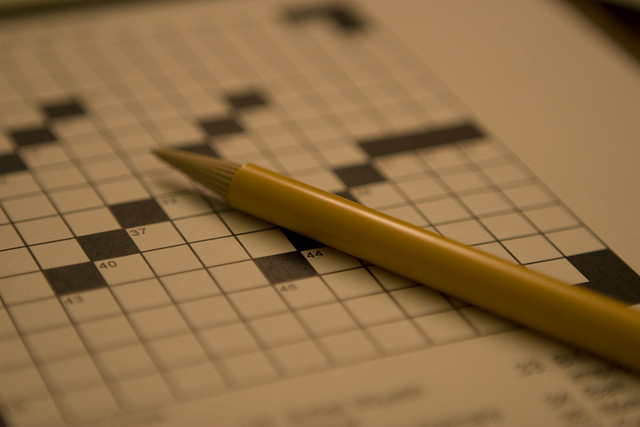 I first experienced ennui while solving a crossword puzzle — no, not the actual feeling of listlessness or dissatisfaction; rather, that’s when I first encountered the word. My adventures in a new tongue had begun, a strange language called Crosswordese, which consists of words used often by crossword makers but rarely experienced in the real world. (By the way, in Crosswordese, a crossword maker is known as a cruciverbalist.)

Do you speak Crosswordese? When you lose a button from a shirt and can’t find the sewing kit, do you ask your partner where the etui is kept? Might you sometimes mischievously refer to margarine as oleo? Have you ever stridden into a church just to point out what a great apse it has?

I started a life of crossword-solving as a teenager, almost three decades before my first novel, Black Chalk, was published, and I give credit to the world of puzzles for helping foster my interest in language.

Among my favorite crossword clues are the following (answers at the bottom of this piece in case you want to solve):

See, crosswords encourage you to play with language. And, as a novelist, I get to play in the sandbox of words every day. But more than just aiding in a love of language, more than just encouraging you to have fun with words, crosswords also stimulate skills such as lateral thinking, humor, and synonym use. You could say that crosswords are the ideal training tool for a novelist.

But the ways in which puzzles have affected my life as a novelist go deeper than the mere enjoyment of solving crosswords. In my early 20s, having discovered that I absolutely loathed Law (the subject of my college degree and subsequent training, and the area in which my parents wished me to work), I needed to find a job. I had known for some time that I wanted to be a novelist, but at that tender age I think I felt too young to write fiction. (And I know I felt considerably too scared.) So instead of turning to novels right away, I got a job in another area I loved: puzzles. And for years, I edited and compiled all sorts of puzzles — crosswords, logic problems, word searches, sudoku, riddles, spot the difference…How could all of this fail to leach into my fiction?

If Black Chalk reads like a puzzle (and many reviewers have stated as much) then it is as much because of my work in that field as it is because I enjoy challenging myself — I really do like tormenting myself with plot problems, it seems. As a writer you sit on your own in a small room for a very long time — and one of the ways I like to keep myself entertained, it turns out, is by constantly pivoting and twisting my plots like the pieces of a Rubik’s Cube until I come across a pattern I find particularly pleasing.

It feels to me that staring at the blank page is a lot like staring at a blank crossword grid. When I make up a crossword, I have, say, a theme and 10 or a dozen answers that I want to place in the grid. And when I set out to write a novel, I have a theme and 10 or a dozen plot points or developments that I want to place in the story. And so the challenge, in both cases, becomes one of getting everything to interlock, of making everything work together, a matter of filling in the gaps in the most pleasing way possible.

Because, let’s face it, what better way is there than solving puzzles to stave off the feeling of…I’m stumbling for the right word here…It’s something like boredom…Dammit, I’m supposed to be good at synonyms…Ah, that’s it: ennui.

Christopher J. Yates was born and raised in Kent and studied law at Oxford University before working as a puzzle editor in London. He now lives in New York City with his wife and dog. Black Chalk is his debut novel.

Thoughts of suicide, depression, and listlessness for weeks on end are just a few ways the loss of a lover is mourned. Unrequited love can open an abyss in which time and activities cease, or it can turn us towards life, as Rilke states in The Duino Elegies, sending us trembling like arrows, leaping into the future. Roland Barthes wrote A Lover’s Discourse after separating from a lover: his compendium of reflections from the lover’s perspective makes the solitary sorrow less so, by reflecting on the universal experience of madness, delusion, and exaltation when falling in love, and later the jealousy, anxiety, and sorrow distance imparts. Barthes traces the trajectory of love, which feels so personal and irreplaceable, and in doing so reveals the common course of love: “(‘It develops, grows, causes suffering and passes away’ in the fashion of a Hippocractic disease): the love story (the ‘episode’, the ‘adventure’) is the tribute the lover must pay to the world in order to be reconciled with it.”Sophie Calle took the arrow’s course upon her lover’s spurning and transformed her misery into art. As obsessive as Barthes, she explores and classifies love from the perspective of the break-up. Her lover ended their relationship in an email that closed with the line, “Take care of yourself.” Her exhibition now showing at the Paula Cooper Gallery is her response. Calle consulted one hundred and seven women and asked them analyze the letter according to their professions: a markswoman shoots the letter, a parrot chews up the crumpled letter, a copy editor breaks the letter down grammatically and calls it repetitive, the criminal psychologist calls the letter’s author manipulative and psychologically dangerous “or/and a great writer.” Although Calle won’t reveal the author’s identity in the exhibition or in later interviews – according to her, “What I’m putting on show is a dumping… I don’t talk about the man, and all the better. The subject is the letter, the text…” – the psychologist’s analysis is accurate in at least one respect: Calle’s former lover is a respected French writer, Grégoire Bouillier.With the aid of the community of women’s responses, Calle depicts the anatomy of a break-up while on the rebound. In the video of Calle’s session with a family mediator, where the letter sits in a chair across from Calle in place of the lover, Calle works through her grief, her astonishment, and attempts to move past it. Although she didn’t like the letter, she states, it was better than nothing, and transforming it into this exhibition “has done [her] a lot of good.” It was good for her and even better for us, for the ephemeral relationship ended with a relic that Calle has transformed into a poignant meditation on lost love and the lover’s obsession. Barthes writes in A Lover’s Discourse, “the love which is over and done with passes into another world like a ship into space, lights no longer winking: the loved being once echoed loudly, now that being is entirely without resonance (the other never disappears when or how we expect).” With Take Care of Yourself, Calle bids her love adieu. As she states, in the end, “the project had replaced the man.”

Last time I was at the book store I noticed an interesting cultural history sort of book called Rats: Observations on the History and Habitat of the City’s Most Unwanted Inhabitants. The “city” is, of course, New York City and the book uses rats as a vehicle to explore the New York’s intricacies and tribulations. The author of the book, Robert Sullivan, is known for his quirky, narrative-based non-fictions, The Meadowlands and A Whale Hunt. If you’re into the whole rat thing check out this Newsday journalist’s account of an evening spent “ratting” with Sullivan. From rats to elephants: during my daily travels the other day I caught an interview with the author of an interesting-sounding book on one of the local public radio shows. Hiding the Elephant: How Magicians Invented the Impossible and Learned to Disappear is a history of the magic act written by a master magician, Jim Steinmeyer. The book describes the origins of tricks that have become magic cliches, like sawing a lady in half. He also seeks to describe the interesting blend of mystery, showmanship, and hucksterism that embodied the turn of the century magic show. Finally, I mentioned the other day the centennial of the birth of Dr. Suess. It turns out that there is a sturdy coffee table book to commemorate this event. It displays his life and work and bears the somewhat dubious title: The Seuss, the Whole Seuss and Nothing But the Seuss.

I’m excited to announce that I’ll be appearing as a judge in this year’s Morning News Tournament of Books. (Click through to see the other, far more distinguished, judges, as well) It’s exciting to be a part of what just might be my favorite ongoing series on the web. Stayed tuned for my second-round judgment once the Tournament kicks off in a few weeks.And by all means, get your bracket (pdf) now and start handicapping.

As has been the tradition for the last several years, The New Yorker closed out 2008 with a fiction double issue. But astute readers may have noticed that this year’s installment was markedly slimmer than that of years’ past.Perhaps it is common knowledge, but I was surprised to discover a few years back that it is not the amount of “news” that principally determines the length of individual issues of newspapers and magazines. The length is actually determined by the amount of advertising that’s been sold. This is why, for example, issues of dot-com-focused Wired magazine were nearly as fat as phone books at the turn of the millennium but slimmed down considerably soon after.The New Yorker is one of the enduring success stories of magazine publishing and is generally able to command attractive advertising rates only dreamed of at other publications, thanks to its affluent and “thought-leading” mix of subscribers, but even The New Yorker may be feeling the ad spending pinch that is impacting the entire media industry right now.This year, the year-end fiction double issue came in at 120 pages. That’s noticeably smaller than the 154 pages in 2007 and 2006 and the 152 pages in 2005.The New Yorker has been exempt from the barrage of negative headlines about the news business, but in 2009, readers used to a hefty helping of long-form journalism and fiction may find themselves with a slimmer serving each week.