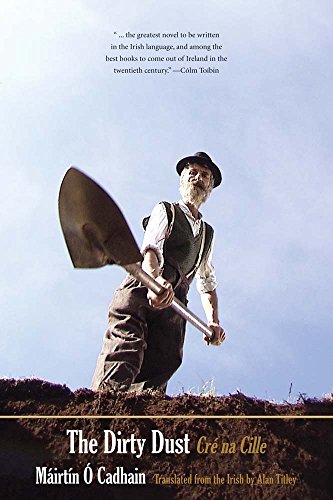 Among the many soothing stories we craft around death, most of us harbor a core belief that it will, at the very least, be peaceful. Even those with no residual belief in an afterlife can find some solace in the idea of an eternal quiet nothingness. No pain, no suffering, no obnoxious neighbors or megalomaniacal bank clerks.

But what if it’s all a lie? What if, instead of peace or rest, what awaits us after death is a continuation of exactly the same petty dramas and sordid resentments? What if, after we’re lowered into our graves, we discover that all the other corpses in the cemetery are still chattering away in some kind of eternal bitchfest?

These are the questions at the heart of Máirtín Ó Cadhain’s modernist classic Cré na Cille. Originally published in Irish (sometimes called Gaelic) in 1949, it’s now available in English for the first time, translated by Alan Titley under the title The Dirty Dust. Often mentioned in the same breath as works of James Joyce and Samuel Beckett, Ó Cadhain’s novel is, in some ways, even more radically experimental. For starters, all the characters are dead and speaking from inside their coffins, which are interred in a graveyard in Connemara, on Ireland’s west coast. The novel has no physical action or plot, but rather some 300 pages of cascading dialogue without narration, description, stage direction, or any indication of who’s speaking when.

We begin with Catriona Paudeen, a bitter, foul-mouthed, recently deceased local woman, frantically wondering whether her family has provided her with an appropriate funeral and buried her in the well-to-do section of the cemetery. Within a few pages, she’s absorbed into a chorus of competing voices as she realizes she’s surrounded by her old neighbors, some friends but mostly enemies, “all rabbiting on exactly the same way as they did above the ground!” The conversation mostly circles around everyday grievances — unpaid debts, unfaithful wives, contentious football games — although political disputes occasionally crop up, mostly related to the Irish Civil War and the Second World War (certain corpses are so nationalistic that they eagerly ask new arrivals whether Adolf Hitler has successfully destroyed England yet). As Titley writes in his thoughtful introduction, the novel is “a listening-in to gossip and to backbiting and rumours and bitching and carping and moaning and obsessing about the most important, but more often the most trivial matters of life, which are often the same thing.”

There are similarities between The Dirty Dust and Jean-Paul Sartre’s Huis Clos, in which three sinners are condemned to spend eternity in a small room together, acting as one another’s torturers (“hell is other people”). However, while Sartre’s play is full of heavy-handed moral and religious overtones, The Dirty Dust is remarkable for its lack of philosophy or theology. The idea of retaining consciousness while the body decomposes seems dark to the point of hellishness, but the text itself is so mundane, irreverent, and raucously funny that the grisly context slides into insignificance. One might surmise that the characters are in purgatory, but since they’re too busy arguing to reflect on their existential state, the theory lacks a foothold.

Essentially, this novel is all talk, and the historical and literary significance of the original lies in the richness of the spoken language, the warts-and-all reproduction of a dialect that, just 70 years later, has all but disappeared. Unfortunately, while Titley’s translation is sensitive and vibrant, it occasionally and inevitably feels stilted or overwrought. The narrow, uninspiring register of English curse words, for example, simply cannot capture the diversity of Irish language insults. Although Titley valiantly conjures terms like “sailor’s bicycle,” “shitehawk,” and “slut of the small spuds,” he also over-relies on shag, shit, bugger, bitch, and other less quotable English perennials. This danger — that the effusive, flowing text of the author may, at times, be reduced to generic translates — is fundamental to the translator’s work. However, as Gayatri Spivak argues in her essay “The Politics of Translation,” “to defer action until the production of the utopian translator, is impractical.” For decades, Irish language purists (we might also call them snobs) have rejected even the possibility of translating Cré na Cille, condemning it to irrelevance outside the walls of university libraries. Titley’s effort to translate the untranslatable, with full knowledge of its inevitable imperfections, is courageous and timely.

For hundreds of years, Irish has been battling the hegemonic language next door and, despite a partial revival in the last century, it continues to decline. Connemara, the setting for The Dirty Dust, is a designated “Gaeltacht” region, where Irish remained the primary spoken language long after it fell out of everyday usage elsewhere. Despite government subsidies intended to protect their linguistic identity, a recent report suggests that within 10 years Irish will no longer be the primary language even in these small enclaves.

Sad though this decline is, The Dirty Dust dispels any misplaced nostalgia for Connemara’s over-idealized past. The humor is very dark indeed, reflecting the reality that that Irish survived in these communities partly as a result of deprivation, isolation, and lack of opportunity. Accusations of theft, fraud, alcoholism, and violence rise above the chatter, before being quickly, desperately denied; ubiquitous nationalism, racism, and misogyny almost blend into the cacophony; and when the voices reflect on what they would have done with a little more time above ground, the overwhelming focus is on settling petty scores, chasing trifling debts, and suing neighbours over imaginary infractions. By the final pages, it’s clear that long before their deaths, the characters lived in a dark, narrow, airless world, where grinding poverty and religious conservatism gave rise to bitter hatreds between secretive, jealous, spiritually stale people.

It’s no surprise, then, that the cemetery’s new arrivals report the departure of waves of young people for England and America. Since the 1840s, mass migration from the Gaeltacht areas has been central to the decline of the language. And who could blame those who left in search of opportunity and relative freedom? While we may regret the loss of the language — and resent its suppression through force and economic coercion — native speakers can’t be expected to make vast personal sacrifices for the sake of a vague notion of cultural heritage. What’s more, Ireland’s current austerity government shows no willingness to make the kind of investment that might draw younger populations back.

All of this emphasises the significance of the translated edition. By exhuming Ó Cadhain’s zany chorus of cadavers, Titley has opened this masterpiece to the wider audience it so richly deserves.

May it not rest in peace.

Niamh Ní Mhaoileoin is an Irish writer living in London. She is currently studying for a Master's degree in politics at the School of Oriental and African Studies. Find her on Twitter at @nnimhaoileoin.

Zach Brennan is staff writer for two health publications in Washington, D.C.The storyline is simple: a Portuguese physician and occasional poet, Ricardo Reis, returns to Portugal after sixteen years in Brazil. First he lives in a hotel and then he moves to an apartment. He loves two women, one is a chambermaid and the other is a virgin with a limp arm. The beginning of the Spanish revolution, and rise of Hitler, Mussolini, Franco and Salazar are set in the background. That’s about it for plot.Jose Saramago, winner of the Nobel Prize in Literature in 1998, instead, centers The Year of the Death of Ricardo Reis on the memories and tangents of the wandering, flawed, bored Reis and his meditations on art, sexual fantasies, and conversations with the ghost of his dead friend and fellow poet, Fernando Pessoa. The tension between storyline and uninhibited details and thought processes of Reis create questions that will not be answered directly by him or the narrative.The book begins with a quote from the title character:”Wise is the man who contents himself with the spectacle of the world.” -Ricardo ReisI thought it was unorthodox to begin a novel with a quote from the title character, so I looked up Reis and found that he was actually a heteronym (a poet develops an imaginary character and personality in order to write in a different style) for the real Fernando Pessoa, an early 20th-century Portuguese poet.So it’s not surprising that the poetic conversations between Reis and Pessoa, now a ghost in Saramago’s novel, concentrate on the metaphysical relationships between the living and dead, the artist and his art, and also parallel what could be Saramago’s own apprehensions about his creative progeny.Pessoa says to Reis, his creation, “We mourn the man whom death takes from us, and the loss of his miraculous talent and the grace of his human presence, but only the man do we mourn, for destiny endowed his spirit and creative powers with a mysterious beauty that cannot perish.”The conversations mix seamlessly with Saramago’s aphorisms, without paragraph breaks or chapters or standard quotation marks or even line breaks for speaker transitions. The sentence structure is similar to the Chilean author Roberto Bolano’s and is easy to wander in and out of like a dream.Reis, like Bolano, is a wanderer who doesn’t seem content trying to describe his reasons for returning to Portugal, nor his relationships with two women, nearly his only contact with the outside world beyond his discussions with Pessoa. This failure of explanation also seems reminiscent of Gabriel Garcia Marquez, whose characters don’t quite understand or question why they’ve initially interacted and then fallen in love.The novel takes patience but rewards careful reading, and can be supplemented with a reading of Pessoa’s poems, written as Ricardo Reis, as well as an understanding of Reis’ motto:See life from a distance.Never question it.There’s nothing it canTell you. The answerLies beyond the Gods.

Reviews
Several themes—migrants, ecology and the procession of the seasons, humans versus the establishment “machine”—have been building with each book.
Reviews
Jean Huets | 2 books mentioned 3 5 min read
● ● ●
Essays On Poetry Reviews
● ●
Reviews
● ●
Reviews
Wiman’s writing works to save by remembering. And remember it does, if only for some time. Highly contingent and uncertain, this is how memory saves.
Reviews
Arthur Willemse | 2 books mentioned 2 8 min read
● ● ●