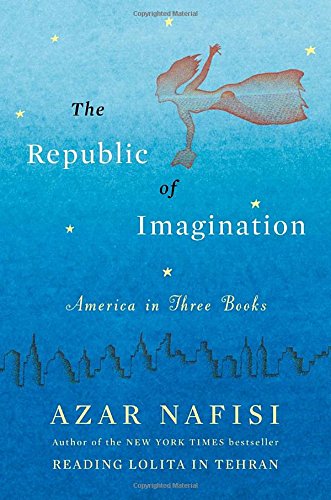 Literature –– no, the world –– needs more people like Azar Nafisi. A strident proponent of fiction, Nafisi has done much more than simply write about literature and its vital role in our lives, she’s taught it –– in America, England, Iran, and in lecture halls all over the world, in which she advocates for literature as an antidote to ideology. In her bestselling Reading Lolita in Tehran, she tells how she quit the university where she was teaching because of the potential intrusion of the totalitarian government. Then, she invited her students into her home, which one could be tempted to describe as Nafisi putting her money where her mouth is, if the mention of money in such a context weren’t so gratuitously irrelevant.

In that book, Nafisi brought the power of American fiction into the world of Iran. In her latest book, The Republic of Imagination: America in Three Books, she brings lessons from Iran to America. In Tehran, her students valued the freedom to read in a profound and immediate way, since such activities were often forbidden, especially for women. In America, reading isn’t cherished in the same way; it’s old hat to us. Or, at least, so said an Iranian man named Ramin who came to one of Nafisi’s readings in Seattle. “It’s useless,” he tells her, “your talk about books. These people are different from us –– they’re from another world. They don’t care about books and such things. It’s not like Iran, where we were crazy enough to Xerox hundreds of pages of Madame Bovary and A Farewell to Arms.”

Is he right? Nafisi doesn’t think so, but her resulting project doesn’t end up explaining why Ramin isn’t right so much as passionately explain why he shouldn’t be right. Having become an American citizen in 2008, Nafisi has a real stake in the answer to Ramin’s question, and so much to contribute to a possible answer. Her book, then, tries valiantly, if not always successfully, to cover a lot of ground. In these pages we find discussions of the three books of the subtitle –– Huck Finn, Babbitt, and The Heart Is a Lonely Hunter, but also many others, including a long epilogue focused on James Baldwin and J.D. Salinger –– as well as the founding fathers, conservatives, Common Core, the Iranian Revolution in 1979, her long-time friend Farrah, college friends Mike and Joanna, and numerous other personal anecdotes of life in America and Iran. It’s a testament to Nafisi’s considerable skill that she’s able to wrangle all this into a mostly cohesive unit. But wholeness actually seems a little beside the point, here, since what makes The Republic of Imagination so wonderful is Nafisi’s irrepressible conviction in the power of fiction to show us who we are.

But it’s more than that, too. Underneath her literary analysis and her personal reflections, Nafisi’s book carries an implicit argument about American values. For her, an American not by birth but by choice, the country she loves was both formed and created by its literature, the myths that both reflect us and instruct us. That’s where we belong, she says. And that’s what we should look to for guidance and difficult truths. Instead, she sees an America steeped in religiosity and jingoism. She quotes Mark Twain, “Patriotism is supporting your country all the time, and your government when it deserves it.” In other words, a true republic must be malleable, open to constant scrutiny and endless revision, and we as citizens must reciprocate by criticizing in the hopes of change and making the necessary changes in ourselves as well. Religion and fervent, uncritical patriotism simplify things. Or, as Nafisi puts it:

Ideology eliminates paradox and seeks to destroy contradiction and ambiguity. While it is generally ruthless to outsiders, it can be consoling when you are in the group that always wears the white hat no matter what.

In her long chapter on Huck Finn, Nafisi celebrates Huck’s “subversive character” and how Jim “questions the system of beliefs sanctioned by religious and social authorities.” (She even valiantly defends the book’s notoriously unsatisfying ending, or, as George Saunders put it, “The ending, oh my god, the ending.”) In Sinclair Lewis’s Babbitt, Nafisi sees the “iconically American” character of “lonely, dissatisfied career men, family men yearning to escape the seemingly desirable entrapments of their mundane lives.” The “standardized” Babbitt, in his desire to please, to be liked, to be successful, is contrasted with the figures in Carson McCullers’s The Heart Is a Lonely Hunter, who are “solitary misfits who cannot create a bond.” They represent “a new kind of urban loneliness that will cast a long shadow over American fiction.” Huck and the characters of McCullers’s first novel stand on one side of American values, Babbitt on the other. Nafisi asks, “What if we let Babbitt win?”

Letting Babbitt win amounts to succumbing to ideology, to allowing the comforting sway of conformism, of strict allegiance, to win out over critical individualism. Literature, with all its complexity and nuance, its ambiguities and contradictions, is not a replacement for these ideas but rather an antidote to them. Literature is not an ideology; it is not a religion. It is something grander, more human and humane. For literature asks nothing of you. It doesn’t tell you how to live or who to love. It doesn’t tell you that you aren’t good enough or that you were born wrong. It doesn’t promise punishment for lack of adherence, and it doesn’t condemn those who don’t follow it. And the best part? Literature acknowledges its fiction, its artifice, its ultimate inability to express the capital-T Truth. Literature only promises an attempt, over and over from endless artists, to see the world as their author sees it, to add if only one speck of useful insight, of meaningful observation, to the great tradition of the written word. Literature doesn’t just invite criticism and contribution, it demands it –– the basis of literature is a kind of call and response. Each new author is in some way responding to all who came before them, before they even write one word. Ideally, literature is complete freedom, and as such it’s a messy world –– cheaters and philanderers run rampant as evil characters get away with evil deeds and good people’s values are compromised and deep-seated values are not only questioned but irreverently tossed out the window. If you’re looking for an easy road map to human ethics, literature ain’t the place for you. But this is Nafisi’s point. We shouldn’t look for the easy instructions, for unambiguous demands; we need to challenge every belief we have, to test them, strengthen them, or replace them if need be.

Growing up in Ohio, religion was a normal part of everyday life. As an atheist from a young age, I clung to literature for its confrontational attitude toward accepted values, but I always disagreed when people would say to me, “Well, books are your religion.” Because literature is not a synonym for religion; it’s not a replacement. It’s another territory altogether. In fact, it is as Nafisi describes it, a country. “So much of who we are,” she writes, “no matter where we live, depends on how we imagine ourselves to be.” She goes on to say:

Stories endure –– they have been with us since the dawn of history –– but they need to be refreshed and retold in every generation through the eyes and experiences of new readers sharing a common space that knows no boundaries of politics or religion, ethnicity or gender –– a Republic of Imagination, that most democratic republic of all.

And like a true republic, citizenship here requires work and thought and an open mind, because literature isn’t easy –– it can still offend, provoke, or cause controversy. Even then, we must engage and not simplistically condemn. As Philip Pullman once put it when I saw him speak at the Sheldonian Theatre at Oxford University, in response to a question about the “offensive” title of his book The Good Man Jesus and the Scoundrel Christ:

Literature always gives you choices –– to act, to respond, to criticize, to protest –– and, more than that, it actually thrives on this process. Whereas ideology, religion, and jingoism flourish in rigidity, in adherence. As Salman Rushdie put it in The Satanic Verses, “unbendingess can also be monomania, he wanted to say, it can be tyranny, and also it can be brittle, whereas what is flexible can also be humane, and strong enough to last.”

I’m deeply appreciative of Azar Nafisi and her project of promoting fiction throughout the world. But more I’m grateful for her Republic of Imagination. My whole life I’ve been a citizen of a complex moral landscape, a rich world created by some of the greatest minds humanity has had to offer, peopled by every type of person from every type of culture –– I’ve always lived here, but now, thanks to Nafisi, I have a name for my adopted home.

Jonathan Russell Clark is a literary critic. He is a staff writer for Literary Hub and a regular contributor to The Georgia Review and The Millions. His work has appeared in The New York Times Book Review, Tin House, The Atlantic, The New Republic, LA Review of Books, Read It Forward, The Rumpus, Chautauqua, PANK, and numerous others. For more, visit jonathanrussellclark.com or follow him @jrc2666.

Reviews
This is fiction as a never-ending car chase, and you might just get away if you can only stop your vehicle from turning into a lampshade.
Reviews
Will Heyward | 6 books mentioned 1 5 min read
● ●
Reviews
Reviews
This is not a book about there. It’s about here, what America feels like, here, and now, while at war.
Reviews
Scott Cheshire | 6 books mentioned 5 min read
● ● ●
Reviews