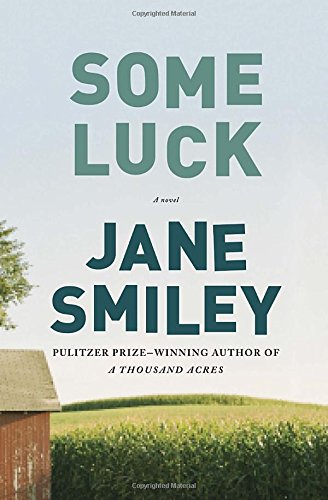 “Have you ever taken the Myers-Briggs personality test?” asks novelist Jane Smiley. “Well, I have and my personality comes up as ‘improviser.’ That’s me.”

We are having lunch at a pricey seafood restaurant overlooking the water on an unseasonably sunny autumn afternoon in Vancouver, and Smiley is explaining how she plotted Some Luck, the first in a sprawling trilogy of novels that tells the story of the American Century through the lives of the seven members of one Iowa farming family. First, she says, she laid out some simple ground rules for herself. The book would begin in 1920 and end in 2020, with each short chapter covering a year, and the prose style would be straightforward and unfussy. Once she had decided on the basic outlines for the trilogy, she sat down and got to work. “I just started and let them live,” she says of her characters. “I knew when they were going to be born, and that’s all I knew.”

This looseness of design shows in Some Luck, which was longlisted for the National Book Award when it was published earlier this fall. At times, especially in the earlier chapters, not much seems to be happening. Major historical events — the stock market crash, the rise of Adolf Hitler in Europe — scud past like clouds on a distant horizon as the Langdons, Smiley’s farming family, plow their fields and care for their children and worry about the weather and crop prices. Characters appear out of nowhere, as if pulled from the author’s back pocket, and take up central roles in the narrative. But slowly, like images from an old-fashioned Polaroid, the characters come to life on the page, smart and quirky and full of opinions, until, by the end of the first volume, one is hooked — not so much to find out what will happen, but to know whom these people will become, what fate has in store for them.

Vital to this narrative pull is the Langdons’ eldest son Frank, who is the closest thing to a protagonist in Smiley’s crowded cast of characters. Headstrong and smart, Frank thrives by upending the expectations of his parents, and later the world around him. “It was beyond Frank to understand why he sometimes did the very thing he was told not to do,” Smiley writes early on, when Frank is still a boy. “It seemed like once [his parents] told him not to do it — once they said it and put it in his mind — then what else was there to do?” Frank’s father, Walter, beats him with a belt until Frank is “too confused by pain” to count off the blows, but when it’s over, it’s clear that the lesson Frank has learned is not that he shouldn’t disobey his parents, but that his will is stronger than theirs.

There is a touch of the charming sociopath in Frank — later in the book, he is recruited to root out spies for J. Edgar Hoover’s FBI — but only a touch. Mostly, he is a survivor, a man determined to live life on his terms. This is true of all the members of the Langdon clan, who are each in their own way attempting to break out of a mold the world has shaped for them. “One of the things that goes through all three novels is characters attempting to live with and make something of what’s happening around them,” Smiley explains. “They’re not defying it. They’re not living back in the Ozarks and going against the grain. People don’t do that in Iowa. They’re attempting to make something of what is happening around them. They all mean well.”

Before our seafood lunch, during a panel discussion at the Vancouver Writers Fest where Smiley was appearing to promote Some Luck, she told the crowd that she had conceived of the Langdon trilogy as a single long story and had originally envisioned stopping each volume in the middle of a sentence, which would then be picked up in the next volume. Her publishers wouldn’t let her do that, but she says she still views the three books as a single continuous ribbon of narrative, each volume covering a third of a century in the lifetimes of the rapidly expanding Langdon clan. (Volume two, Early Warning, which takes the characters up to the 1980s, is due out this spring; and the final, as yet untitled volume is scheduled for fall 2015.)

The idea for the trilogy, Smiley says, arose in part out of her fury over the political situation in the U.S. since the Bush Administration and a desire to understand “how the country got where it is today.” She set the book in Iowa farm country, territory she explored in her 1991 Pulitzer Prize-winning novel, A Thousand Acres, because she wanted to cut through contemporary Americans’ ignorance about where their food comes from. “We forget,” she says. “We know, but we forget. We think it comes from the grocery store. There’s this constant tension in American life about, ‘Does my food come from General Mills or does it come from the ground?’”

Smiley addresses this tension directly in the later chapters of Some Luck, set during the postwar years, when Frank’s younger sister, Lillian, marries and leaves Iowa for Washington D.C. to begin raising her family. The child of a father who farmed oats and couldn’t start his day without a bowl of oatmeal, Lillian is stunned to discover Cheerios at the neighborhood supermarket. She is also delighted to be able to feed her son formula made with purified city water in sterilized bottles, rather than breastfeed.

For Smiley, Lillian’s attraction to these consumer conveniences is a rational response to a childhood spent on a hardscrabble rural farm, but also emblematic of how an entire generation allowed itself to be “suckered” into a reliance on corporate America. “I love Lillian,” says Smiley, “but the way she chooses to feed the kids, the way she chooses the cereals she chooses, she’s a sucker. She thinks, ‘We’ve skirted along the edge of serious food-borne illnesses [growing up on the farm] and so: I believe. I believe that General Mills is going to give me something more nutritious and more safe than what I grew up with. I believe I don’t want manure in the yard.’ Well, that’s the way we felt in the ’50s.”

Smiley herself was born in 1949 and grew up in Webster Groves, Mo., a suburb of St. Louis. She moved to Iowa in her early 20s for graduate school and remained in the state for more than two decades, teaching at Iowa State University until the mid-1990s when she moved to the coastal resort town of Carmel, Calif., where she now lives with her fourth husband, a real estate developer. Though A Thousand Acres, the book for which she is perhaps best known, is also set in Iowa, her fiction has traveled widely in the course of her long career. One early novel, The Greenlanders, is set among the Norse peoples of 14th-century Greenland. A more recent book, Ten Days in the Hills, loosely based on Giovanni Boccaccio’s Decameron, is set in Hollywood during the early days of the Iraq War.

In the case of the Langdon trilogy, Smiley says she set out to tell the story in simple, unadorned prose. “One of the things I was doing while I was starting to write this book was reading a lot of Alice Munro,” she says. “Alice Munro writes in a very straightforward style, and that allows her to take up a lot of issues and discuss a lot of things because you trust her.”

The novel’s omniscient narration, which weaves between characters, sometimes directly accessing their innermost thoughts, and at other times merely reporting their outward actions, allows Smiley to cover a great deal of ground. In the first volume, the reader becomes immersed in life on a small Midwestern farm without running water or tractors, then is whisked off to North Africa and Italy where Frank serves as a sniper in the U.S. Army during World War II, and lands finally in early-’50s suburban Washington and New York where Cold War-era paranoia reigns.

Asked how she mastered the details of these wide-ranging worlds, Smiley offers a modest authorial shrug. “I’m not a scholar,” she says. “I don’t have to master it. I only have to appear to master it. Some things are fairly self-contained, so in order to appear to master them, you just to learn the facts and think about it and figure it out. Other things are not so self-contained so you have to spend more time trying to sort out what’s essential and what’s not essential.”

Much of classic 20th-century fiction, she acknowledges, operated on a narrower scale, focusing on the author’s subjective filter on the world rather than on the world itself. Even today, authors can be reluctant to venture too far from their own experience, fearing that they have no right to tell a story that doesn’t belong to them. This, clearly, does not count as one of Smiley’s chief fears. “The question, as I view it, isn’t ‘What right do I have to do this?’ but ‘Just try and stop me,’” she says. “The reader is the one who decides whether you have the right to do it or not. Your job as an author is to draw the reader in, and to get the reader to willingly suspend disbelief. I don’t have to second guess myself already. The reader’s there to second-guess me. That’s his job or her job.”