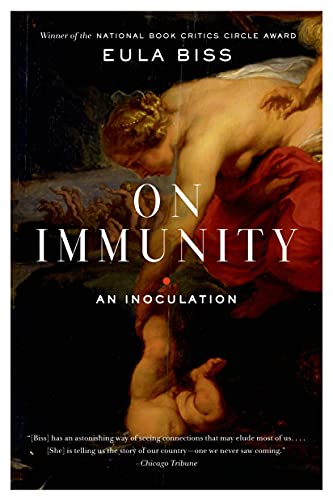 In 18th-century England, most everyone got smallpox, an infectious disease that results in terrific rashes and blisters on the skin. Facial scars left over from an infection were a common occurrence. This was true for everyone, regardless of class or station in society, except for milkmaids. It was widely known that milkmaids who came into contact with cows blistered with cowpox, and who developed blisters on the hands they used to milk their cows, would not develop smallpox, even if directly exposed to someone who was suffering from the disease.

“Vaccination is a precursor to modern medicine, not the product of it,” writes Eula Biss, in On Immunity: An Inoculation. “Its roots are in folk medicine, and its first practitioners were farmers.” During an epidemic in 1774, an infected farmer transferred pus from a cow into the arms of his wife and two small boys, using a darning needle. “The farmer’s neighbors were horrified,” Biss notes. Nonetheless, his family developed immunity to smallpox.

Both the effectiveness of vaccination and the horror and outrage it can provoke live on with us to this day.

On Immunity is a wide-ranging book, covering topics as diverse as pesticides, metaphor, and vampires, with influences ranging from Greek myth to Voltaire to Susan Sontag. Biss traces our understanding of the undead along with our understanding of germs, blood, vaccination, and capitalism, which has often been described as blood sucking. (Marx: “Capital is dead labor, that, vampire-like, only lives by sucking living labor, and lives the more, the more is sucks.”)

Biss explores many of the ways in which vaccination has been used to exploit and oppress the powerless. “The poor,” Biss points out, in a passage about forced vaccination campaigns, were often “enlisted in the protection of the privileged.” This has been true in countries across the globe.

But those being oppressed often fought back.

The working-class people who resisted Britain’s 1853 provision for free, mandatory vaccination were concerned, in part, with their own freedom. Faced with fines, imprisonment, and the seizure of their own property if they did not vaccinate their infants, they sometimes compared their predicament to slavery.

“Vaccination, like slavery,” Biss writes, “raises some pressing questions about one’s rights to one’s own body.” Set in these terms, the moral argument about vaccination concerns the individual, not society.

The fight against vaccines rages on, though it is no longer a working-class struggle but rather a struggle fought by the privileged. The public face for the anti-vaccine movement is celebrity Jenny McCarthy, who has raised questions about the connection between vaccines and autism, and has argued for parents’ rights not to vaccinate their children. These arguments against vaccines continue to center on the individual; that is, not ‘what’s best for society?’ but rather ‘what’s best for my child?’

Vaccines do benefit the individual; however, as Biss explains, their real strength is in the community.

If we imagine the action of a vaccine not just in terms of how it affects a single body, but also in terms of how it affects the collective body of a community, it is fair to think of vaccination as a kind of banking of immunity. Contributions to this bank are donations to those who cannot or will not be protected by their own immunity. This is the principle of herd immunity, and it is through herd immunity that mass vaccination becomes far more effective than individual vaccination.

Were Biss a different kind of writer, this book might have been a point-by-point rebuttal of Jenny McCarthy and others in the anti-vaccination community. The results of scientific studies, after all, clearly support the use of vaccines. Readers hoping for such a rebuttal will no doubt find the book perplexing. Biss’s project, it turns out, is far grander than a simple explanation of the facts.

Each of the 30 concise chapters of On Immunity has an element of “separateness” to it. That is, each is able to stand on its own as a self-contained micro-essay. Look a little closer, though, and you’ll find that they are all interdependent — much like the individuals who make up a community.

Some chapters of On Immunity are downright gothic, while others fall well within the traditions of literary criticism and nature writing. Biss explores the impacts of Rachel Carson’s groundbreaking Silent Spring (1962), the book that brought the harmful effects of pesticides, especially DDT, to the public’s attention. Interestingly, Biss explains what she, and others, see as problems brought on by the movement to phase out DDT — “DDT is not exactly what Carson feared it was” — including a resurgence of malaria in parts of Africa.

Silent Spring, though remembered as a forceful argument against pesticides, was not without nuance. “But the enduring power of [Carson’s] book,” Biss writes, “owes less to its nuance than to its capacity to induce horror.” Though Biss indulges in horror throughout the book — quite literally in the figure of Dracula — On Immunity bears no resemblance to a fear-mongering polemic.

Admirers of the book-length essay will find this work remarkable. Few writers are able to so seamlessly stitch together literature, theory, personal experience, and science. Still, it’s hard to imagine Jenny McCarthy and her followers paging through On Immunity, and so, in comparison to Silent Spring, one wonders what type of effect it will have on the body politic.

On Immunity is as much a book about trust as it is a book about vaccines. The current anti-vaccine crusade is grounded in a lack of trust of medicine, of science, of each other. Its arguments are based on the assumption that we can separate ourselves from those around us. Biss provides an inoculation against mistrust, against the primacy of the individual to the detriment of the community. Perhaps, as she makes her nuanced arguments, Biss is engaging in a radical act of trust, assuming that the public is capable of understanding more than simple sound bites.

“Our understanding of immunity remains dependent on metaphor,” Biss writes, “even at the most technical level.” In On Immunity, the concept of immunity becomes a metaphor for ourselves, for the ways we relate to one another, the way we live as a social body. We cannot separate ourselves from the poor, or the sick, or the Jenny McCarthys. “We are, in other words, continuous with everything here on earth. Including, and especially, each other.”

Kyle Boelte is the author of The Beautiful Unseen, a book about fading memory, his brother's suicide, and San Francisco's fog, forthcoming from Soft Skull in February 2015.