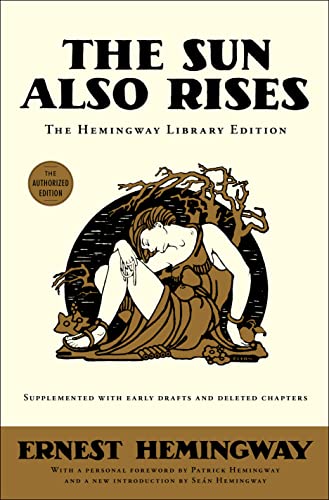 Scribner’s has published an edition of The Sun Also Rises highlighted by a variant opening chapter-and-a-half, material that Hemingway eliminated from his final draft at the encouragement of F. Scott Fitzgerald. Readers are used to the 1926 novel starting off with a portrait of Robert Cohn; it turns out that, as many scholars have known, Hemingway planned to commence with the words “This is a novel about a lady,” and a snapshot of Lady Bret Ashley, only then to launch into his dissection of Cohn, in the middle of chapter two. This manuscript material is now available in “The Hemingway Library Edition,” volume, put out by Hemingway’s original publisher under the editorial aegis of Patrick Hemingway (his son) and Seán Hemingway (the grandson also rises). The release prompts us to consider how to receive this introduction and challenges us to wrap our heads around an alternate universe in which Fitzgerald’s advice goes unheeded. There will be skepticism about the endeavor; indeed, the previous “Hemingway Library Edition,” led to a bit of a takedown right here in The Millions.

The Sun Also Rises, its author’s first novel, crystallizes elements of the Hemingway canon: boozey expatriate Parisian lifestyle, delight in homosociality, bullfighting and bullrunning in Pamplona, how to fish correctly, how to write correctly, how to do anything correctly. I’ve included the book on countless course syllabi and read it almost as many times, and I still find it remarkable that this seminal work of Hemingway’s oeuvre, this text famous for defining the “lost generation,” starts out with a passage rich in thinly veiled anti-semitism. (The broken proboscis that Cohn suffers in a boxing match is said to “improve” his nose. We get it.) Therefore my first response to the new edition was to wonder whether it was an attempt to steer readers away from the unsavory aspects of the novel, a trigger warning-age sanding down of edges, meant to ease readers into the scornful Cohn section, rather than bludgeoning us with it at the start.

If so, I have some bad news, news that I will encapsulate in a word: Nordic. Or rather: non-nordic. The word “Nordic” does not appear at all in the standard The Sun Also Rises, but it arises in the new manuscript material, where the epithet “non-Nordic” is applied to Robert Cohn. This is 1920s terminology fraught with racializing overtones, and its presence here serves to highlight some of the nastiness in Hemingway’s book.

What to make of the fact that Fitzgerald had a hand in editing the term out? In The Great Gatsby, published a year before The Sun Also Rises, the villainous Tom Buchanan disquisitions about the “dominant race”: “We’re Nordics,” he says to his white, old-moneyed company, and it is their responsibility to defend civilization from them who are not. Buchanan is parroting ideas from Lothrop Stoddard’s The Rising Tide of Color, a book that will show up in Jay Gatsby’s personal library; Fitzgerald draws the rhetoric from a system of racial thinking popular in early 20th-century America, a jumble of white supremacism, eugenics, both imperialism and isolationism, and xenophobia. No less dangerous for being inconsistent and disunified, it was a powerful enough undercurrent to produce the restrictive 1924 Immigration Act. It is the relationship to this context that leads Walter Benn Michaels, in a controversial argument in his book Our America, to situate Gatsby and The Sun Also Rises within a subgenre of 1920s literature he calls “nativist modernism.”

The inclusion of the word “nordics” brings the new edition of The Sun Also Rises closer in line with this system of thought, highlighting how contempt for Cohn is never far removed from his supposedly inferior racial stock. Throughout the novel, this inferiority is often put as a matter of social behavior and aesthetic taste. Cohn is unglib, unstoic, uninebriated, and is a fan of W.H. Hudson, who generated the kind of prose that Hemingway steeled himself every day of his life not to write. Indeed, the introductory material clarifies some of the condescension; it offers a history of Lady Bret Ashley’s names that makes legible Cohn’s later gaffe as her addresses her as “Lady Bret” instead of the proper “Lady Ashley.” The newly published passages also establish language that will form the novel’s memes. Ashley’s fiancée is called “nice,” a code for social approval that Hemingway proceeds to use 967 times in the novel (may not be the exact number), and is also described as “one of us” — terms that are used to exclude Cohn.

Even the initial assertion that Ashley is the novel’s focus is undermined by the depiction that follows, which largely treats the same question driving the overall plot: which male will win the right to possess the female body in the end? (No, this is not a novel that would pass the Bechdel test.) Throughout The Sun Also Rises, that issue is made more urgent by the possibility that Cohn will succeed in the end, the anxiety that Nordic stock would become diminished.

Hemingway’s discarded opening section includes a passage in which his narrator Jake Barnes self-reflectively ruminates over his choice to use the “I” of the first-person voice. Not just fodder for narratology geeks, this moment can open the door to readings that will claim that the novel is portraying its derision based on class and ethnicity (and, at times, gender and sexual orientation) with self-awareness — that it’s all ironic! The text seems confused at times, sure, but the fact is that Cohn is never redeemed or relieved of his role as nemesis, and that the novel ends with Barnes rescuing Ashley from a disastrous affair with a Spanish bullfighter.

I’m less interested in how The Sun Also Rises dramatizes the racial anxieties of the 1920s than I am with our cultural memory of the book. We are made aware of the unhappy ethnic elements of Oliver Twist and The Adventures of Huckleberry Finn, but the foundational 1920s U.S. novels get a pass, it seems to me. The Sun Also Rises is known as a novel of the lost generation, and Gatsby as one of the jazz age, while both are formed out of the dark stuff of our history. The new-old introduction of The Sun Also Rises can’t mitigate that; maybe it can help us reckon with it better.

Jonathan Goldman (Associate Professor, New York Institute of Technology, Manhattan) is author of Modernism Is the Literature of Celebrity (U of Texas P 2011) and co-editor of Modernist Star Maps: Celebrity, Modernity, Culture (Ashgate 2010). His writings on 20th-century literature and culture appear in such publications as The Paris Review, The Chronicle of Higher Education, James Joyce Quarterly, Novel, and Narrative. Twitter: @jonnysemicolon. More here.

Essays
● ●
Essays
I feared that taking medication to ease my anxiety and panic might destroy my urge or ability to create. I had heard of many artists who had gone mad or suffered from horrible depression, and took the popular prescription of the day, never to write or create again.
Essays
Gila Lyons | 5 books mentioned 26 8 min read
● ●
Essays
Essays

When I found Jim Thompson’s The Transgressors at a recent used book sale, I became cartoonishly excited. Thompson is one of my favorite pulp novelists, and there was nothing to dislike about my find: its cover depicted an old coupe stuck in rutted mud, with someone rushing, I guessed, to check a captive in its trunk. The back-cover copy described a reliably sadistic tale; an old New Republic blurb promised “a tour of hell.” It was called The Transgressors, for Christ’s sake. I couldn’t have asked for more.

My excitement stemmed from The Nothing Man, a 1954 Thompson novel that I discovered a decade ago, having never before heard of the book or the author. It told the story of a sexually disfigured veteran who goes on a killing spree to cover up his secret — as if being a serial killer was the lesser shame. It was a bizarre, unsettling book, angry with energy, that seemed to have been written yesterday, not during the Dwight D. Eisenhower years.

Unfortunately, it’s been downhill from there. In the years since, I’ve returned to Thompson again and again, and I’ve never recaptured the feeling that jumped from The Nothing Man. The Getaway — made famous by Steve McQueen, and later, Alec Baldwin and Kim Basinger — came close, but was derailed by an outré epilogue that seemed imported from a different book. The Killer Inside Me, The Golden Gizmo, Pop. 1280 — all were fine, but none supplied the blast of that first discovery. The Transgressors turned out to be readable, but was the worst Thompson I’ve read — and it led me to ask myself a question common to fading relationships: Is it him or is it me?

I’ve experienced this pattern — manic love, followed by a futile attempt to regain said manic love — with others: I fell for T.C. Boyle after my brother slipped me The Tortilla Curtain, and despite Drop City, When the Killing’s Done, The Harder they Come, and others, it remains my favorite Boyle. Portnoy’s Complaint, The Sun Also Rises, and Billy Bathgate are my favorite Philip Roth, Ernest Hemingway, and E.L. Doctorow novels — and were the first of each I read. These are legendary figures, responsible for a raft of classics. Is it possible that out of all of their works, those three are the best? Did I just happen to choose each one’s greatest effort right out of the gate?

I would say that I didn’t. My experience with Thompson, and to a lesser degree with Boyle, has led me to believe that the discovery of a new style — Thompson’s turbo-charged dissolution; Boyle’s burbling streams of words — eclipses the storytelling that the style supports. Reading the stylistically unfamiliar — be it Evie Wyld or Lauren Groff or Patrick deWitt — can be so pleasingly disorienting that it leaves the reader giddy: This is incredible, we think as we flip on through. This is a totally new experience. As a reader, it’s the moment you seek — but that euphoria can also distort your inner Michiko Kakutani and set future expectations impossibly high.

Breakfast of Champions might not have been Kurt Vonnegut’s hands-down masterpiece, but I read it before any of his others — and for that, it’s elevated in my mind. With its drawings of sphincters and cows and general jokiness, it’s no Cat’s Cradle or Slaughterhouse-Five — but it doesn’t need to be, because the Vonnegut basics were there. And most importantly, for me, it came first. When you see a beautiful stranger across a crowded room, it doesn’t matter that he or she might not be having the most attractive day of his or her life. The spark fires either way, and you won’t forget the moment.

This isn’t to say that quality doesn’t matter. The first Danielle Steel novel you read will be as crummy as your last, and no matter when you read Tough Guys Don’t Dance, it won’t top The Naked and the Dead. But when a work is discovered can, at the very least, insert a welcome uncertainty to an overbearing consensus. In everything I’ve read about Jim Thompson, I haven’t seen much mention of The Nothing Man. This isn’t all that surprising, since he wrote more than 30 books. But critics consistently cite The Killer Inside Me and Pop. 1280 as two of his best. Maybe they are. But maybe those critics would think differently if they’d read The Nothing Man first. As for me, I’ll keep trying: there are still a few unread Thompson novels sitting on my shelf.