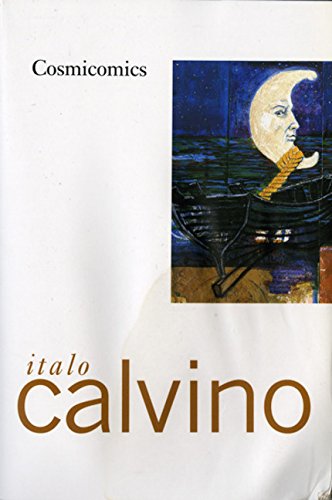 Imagine a brilliant work of science fiction that wins the National Book Award and is written by a contender for the Nobel Prize in literature. Imagine that it is filled with dazzling leaps of the imagination, stylish prose, unique characters, philosophical insights, and unexpected twists and turns, but also draws on scientific concepts at every juncture. Imagine that it ranks among the finest works in the sci-fi genre.

And then imagine that almost no science fiction fan has read it, or even heard about it.

Implausible? Hardly! Such is precisely the case with Italo Calvino’s Cosmicomics, published in Italian in 1965 and translated into English three years later. (William Weaver’s excellent translation won the National Book Award in 1969, back when it had a translation category.) Today, the book is mostly remembered for its postmodern experimentalism or its fanciful narrative devices. But for readers coming to Calvino for the first time, Cosmicomics often takes a back seat to If on a Winter’s Night a Traveler, or perhaps Invisible Cities.

But Cosmicomics is my favorite Calvino book, just as ingenious and well-written as those better-known works, and even more delightful. Many absurdist and postmodern narratives achieve their finest effects by frustrating the reader — indeed Calvino’s most famous novel stands out as the classic example of literary frustration, which is both its subject and effect. Cosmicomics, in contrast, is that rarity among progressive texts: its premises are absurd and almost incoherent, yet the plot lines are filled with romance, drama, and conflicts that draw the readers deeper and deeper into the text.

I hesitate before telling you about the specific tales in this collection of intertwined science stories. If I tell you, you will refuse to read the book. You won’t want to read, for example, a love story about a mollusk — one, moreover, who has never even seen his beloved. I know that this sounds somewhat less romantic than Pride and Prejudice, but trust me, even mollusks (at least those envisioned by Italo Calvino) are capable of great passions. By the same token, a story in which the only action is looking at distant stars through a telescope must sound more boring than a Brady Bunch rerun marathon. But I assure you that you’re wrong. Calvino extracts Dostoevskian pathos from his starwatcher, and you will feel his pain and humiliation as he searches for personal redemption among the cosmos.

Each story in Cosmicomics begins with a scientific premise, which serves as a springboard for a story. The protagonists might be mollusks or dinosaurs or even physical or mathematical constructs, but Calvino infuses them will all the foibles and fancies of humans. Here we encounter unfettered ambition, pride and envy, jealousy and desire — all the same ingredients that we cherish in ancient Greek tragedy or Elizabethan drama, but now translated into an extravagant scientific framework. None of the science here really adds up, but you won’t complain, because Calvino compensates with fancy for his abuses of the rules of physics. Consider the end result a kind of Einsteinian magical realism.

The opening story, “The Distance of the Moon,” is a case in point. The scientific premise for this tale is a simple one: “At one time, according to Sir George H. Darwin, the Moon was very close to the Earth.” Ask a hundred authors to turn this concept into a story — I doubt one of them will even approach the beautiful, fabulist tale Calvino serves up. “Climb up on the moon?” he asks. “Of course we did. All you had to do was row out to it in a boat and, when you were underneath, prop a ladder against her and scramble up.” From this absurdist stance, Calvino constructs a love triangle filled with pathos and longing, a rich psychological tapestry in which the experimental aspects of the tale, breathtaking in their own way, do not distract from the inherent appeal of the storyline. Yes, this is one of the great science fiction stories — and you could even read it as a critique of the sci-fi genre — yet it will never get acknowledged as such. Calvino is deemed too “respectable” to show up anywhere near Heinlein and Asimov on a bookshelf.

In another story, Calvino constructs a much different love triangle, complicated by the unpleasant fact that each individual is falling through empty space in parallel lines. How do you consummate a love affair if your line never intersects with the beloved’s? Leave it to Calvino to find inspiration in such a strange premise. In “How Much Should We Bet?”, I am reminded again of Dostoevsky — this time of his short novel The Gambler — but here the wagers involve the evolution of the cosmos and the unfolding of history. In “The Aquatic Uncle,” an amphibian is embarrassed by his great-uncle, still living as a fish after the rest of the species has evolved into land-dwellers. He needs to introduce his fiancée to his family, and is ashamed at the prospect of her meeting his fishy forbear. Can you imagine what happens? Trust me, you can’t…but Calvino can.

In describing these stories, I find myself dwelling again and again on the human interest angle. How peculiar that must sound, when humans really never appear in this book. As such, Cosmicomics ranks among a tiny number of major works of fiction that can dispense with people and still embrace humanity — I’m thinking of books such as Flatland or Watership Down or Animal Farm. Each of these novels is better known than Cosmicomics, but Calvino’s stunning work deserves mention in the same breath. Science fiction readers owe it to themselves to track it down. And those who hate sci-fi might be surprised, too, by how much literary panache can be found among the outer cosmos and sub-atomic particles, at least after they have been magically transformed by Italo Calvino.

Ted Gioia writes on music, literature, and popular culture. His next book, Music: A Subversive History, will be published by Basic Books next year.