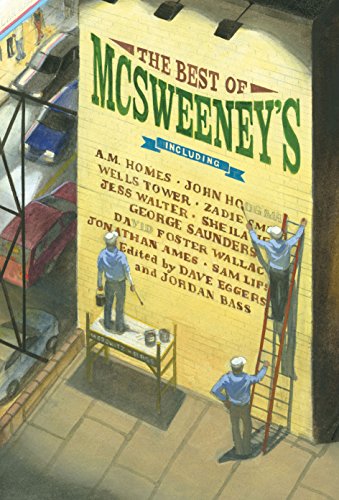 In A Heartbreaking Work of Staggering Genius, Dave Eggers describes the origins of his first publishing endeavor. The first ad (well, it was a sticker, but whatever) read thusly:

In typically postmodern (and neurotic) response to this, Eggers realizes that something’s amiss about the sticker: “It’s unclear who is being screwed. Who are the idiots that should be getting screwed?” He imagines a few ways in which this ambiguity could have been avoided:

(“THOSE IDIOTS” NOT REFERRING TO THOSE BEHIND

WHO ARE GOOD PEOPLE AND SHOULD NOT BE SCREWED.)

The whole point of the marketing strategy was to intrigue people, to make them think, “What is Might?…I do not know, but when it becomes clear what it is that they will be doing, I will be very interested in their doings.”

One could have easily said the same of Mr. Eggers at that point in his career. Who is this young, ballsy writer? Though older than the rest, Eggers’s debut came along with a group of writers we could call the Undergraduates –– young, precocious authors with daring, audacious styles. Jonathan Safran Foer, Zadie Smith, Mark Z. Danielewski, and Z.Z. Packer all made their debuts around the same handful of years. (The Graduates, of course, being David Foster Wallace, Jonathan Franzen, and Jeffrey Eugenidies, et al.) Eggers, here, would be that older guy in the class, somehow funnier and smarter than everyone else, even if he never ends up graduating.

For Eggers definitely did not graduate with his class. No, he dropped out and started his own ventures. Who would have been able to predict the trajectory of Eggers’s career? From that original (but now in some ways dated) first book, Eggers has since stepped in nearly every field relating to writing: he published two story collections (one of which is flash fiction), novels, and two nonfiction works; he co-wrote two screenplays; he has written comic strips and essays and song lyrics; he founded The Believer, Wholphin, and 826 National, a non-profit that helps kids with writing; and he edits the annual Best American Non-Required Reading series, with the help of students. He’s been nominated for numerous awards (including the Pulitzer and the National Books Critics Circle Award) and won others (including the Salon Book Award and the American Book Award). But by the far the most influential contribution Eggers has made on the literary landscape is McSweeney’s, the so-called “Quarterly Concern” that has, for the last 15 years, produced some of the most original fiction and nonfiction out there, all packaged in some of the most beautiful and innovative book designs ever printed. Who is this young man? We didn’t know, but when it became clear what it was that he was doing, we all became very interested in his doings.

McSweeney’s could be called aggressively progressive. Not only are the stories often unconventional, experimental, and unique, so are the issues themselves. Some are conceptual designs, as in Issue 21, the cover of which has a little flap and if you pull it out it makes the cover connect to the back, creating “an unending panorama, a revelatory 360-degree immersion into a packed and pointy world.” Or Issue 26, which came in three small, postcard sized books and were “based on the World War II-era Armed Services Editions released by the Council on Books in Wartime, under the auspices of the U.S. War Department’s Morale Branch.” Or Issue 33, which was presented as a full-blown newspaper called The San Francisco Panorama. Others featured extremely original (and sometimes downright odd) theme: Issue 31’s aim to unearth “neglected or deceased literary forms,” such as the pantoum, the whore dialogue, the Socratic dialogue and Graustrarkian Romance (whatever the hell that is), or Issue 32’s challenge for authors to “travel to somewhere in the world…and send back a story set in that spot fifteen years from now, in the year 2024.”

Even the issues without a conceptual design or a creative theme are elegantly and beautifully rendered. Behind this progressive innovation lies an old-fashioned love of books as objects. McSweeney’s, I think, deserves much credit (and should, in various ways, be followed) for figuring out a way to make printed works not only relevant but also wholly separate from the latest digital iterations. You can’t ever make an e-book as gorgeous to look at or as wonderful to hold in your hands. And to those people who think covers and jackets and designs don’t matter, well I say this: Screw those idiots.

Same goes for those who dismiss the entire enterprise of McSweeney’s as a hipster outlet for quirky nonsense and youthful haranguing. We have now The Best of McSweeney’s, a 600+-page anthology that samples from everything they’ve put out in the last decade and a half. I would defy anyone to read this thing cover-to-cover and still maintain that McSweeney’s has contributed nothing to the world of creative art. As the back of the books promises, The Best of McSweeney’s gives us “a fascinating glimpse into recent literary history.” This is true for more than just the merit of the pieces included (though they are nearly all great), but for the unexpected insights their inclusion brings out.

This book is simply brimming with priceless inside looks into the workings of contemporary writers. Many of the stories are introduced by their authors, giving us a little bit of backstory into the creation of the thing. Wells Tower’s presents us with two versions of the same story, “Retreat,” which appeared in Issues 23 and 30, respectively. Each contain the same characters, the same essential setup, and even much of the same lines. Only the perspectives are different, but boy does that change the whole of it. In explaining why he struggled so much with this story, Tower cites “all the long-form nonfiction” he’d been writing. Here, he explains one difference between fiction and non-:

Nonfiction –– even ‘literary’ nonfiction –– call for tools and processes that are pretty much useless when it comes to making short stories. In metalworking, they have this term, ‘cold connections,’ which is when you take two pieces of metal and rivet. A few smart bashes, and you’ve got a bracelet with lots of nice bangles on it, and you’ve spared yourself the hot, tedious business of soldering and sweating joints. In a pinch, nonfiction can squeak by on cold connections.

Tower’s two iterations of “Retreat” (as well as his comments on them) offer a fascinating example of how much one can do with a single premise.

We are later, of course, to see Tower’s “Retreat” reappear in his collection Everything Ravaged, Everything Burned, and we now know which version he prefers (the second one, FYI). Many of the stories here ended up in well-acclaimed collections, and one of the great aspects of this anthology is getting to see them in earlier drafts. David Foster Wallace’s story “Mr. Squishy” appears here, and one very subtle change that occurred between its appearance in McSweeney’s (under the pseudonym Elizabeth Klemm, a moniker everyone saw straight through)and its inclusion in Wallace’s Oblivion is worth noting. When “Mr. Squishy” graced the pages of Issue 5, the opening line read: “The Focus Group was reconvened in another of Reesemeyer Shannon Belt’s 19th-floor conference rooms.” In Oblivion, it reads: “The Focus Group was then reconvened in another of Reesemeyer Shannon Belt Advertising’s nineteenth-floor conference rooms” (italics mine). Besides spelling out 19th (Wallace often used shorthand, acronyms and abbreviations in order to fit as many words in as little space as possible) and clarifying just what “Reesemeyer Shannon Belt” did as a company, the addition of the word then is hugely significant. It completely changes the opening line, albeit in a small way. In the first version, the line functions as a beginning; in the final version, we join a narrative already in progress. We missed what came before then, as if the story had been going on long before we came to it.

Other highlights: a rare short story from Zadie Smith, taken from the issue that pitted McSweeney’s against They Might Be Giants. A section of comics from Issue 13 featuring funny and poignant pieces by Chris Ware, Daniel C. Clowes, Joe Sacco, and Adrian Tomine. Andrew Sean Greer’s hilarious account of his and his husband’s experience at a NASCAR event in Michigan (from the San Francisco Panorama issue). We get Jonathan Ames’s “Bored to Death,” inspiration for the HBO series of the same name, George Saunders’s “Four Institutional Monologues,” one of which only recently (despite the story being published in 2000) appeared in his latest collection, Tenth of December, and a trio of stories from International writers, deriving from issues dedicated to Norwegian, South Sudanese, and Indigenous Australian fiction.

But this being McSweeney’s, there’s a lot more than stories. Included here are also the best letters they’ve ever received, from the likes of Sarah Vowell, Peter Orner, and John Hodgman.  There are four pantoums from the “neglected and deceased” forms issue, as well as a few 20-minute stories, which are exactly what they sound like: stories written in 20 minutes flat (although Aleksandar Hemon admits that his took 30). In other words, this is a fun and eclectic anthology, perfectly in keeping with the McSweeney’s philosophy, which Eggers explains in his Introduction thusly: “That’s what we look for –– writers who make us feel like they’re seeing their world, whatever that is, with fresh eyes, and who allow us to experience it through their words.” McSweeney’s, like Eggers himself, regularly provides the world with interesting and unique perspectives –– from different cultures, different personalities, and different aesthetic approaches. It does what all literary journals should aim to do. That is, be bigger than the sum of its parts, yet still allow each part to stand on its own. It’s a hard line to walk, but McSweeney’s, with its irreverent attitude and pure love of good writing, manage to do every issue, every year.

Despite some notable exclusions (no Joyce Carol Oates? no Yannick Murphy?), The Best of McSweeney’s is a triumph, not only as a stand-alone book, but also (and especially) as a testament to the power of the short story, the essay, the experiment. A tribute, too, to the power of one person’s vision, proof that writers can influence the world outside the borders of their prose. Eggers, lucky for us, has a great deal of passion for the work of other people, for supporting new writers and celebrating neglected ones. His and his colleagues’ (Jordan Bass and Eli Horowitz, the two editors of McSweeney’s) is an essentially artistic project but underneath that is a layer of fierce morality, one that believes in the rights of people and the importance of their stories.

Jonathan Russell Clark is a literary critic. He is a staff writer for Literary Hub and a regular contributor to The Georgia Review and The Millions. His work has appeared in The New York Times Book Review, Tin House, The Atlantic, The New Republic, LA Review of Books, Read It Forward, The Rumpus, Chautauqua, PANK, and numerous others. For more, visit jonathanrussellclark.com or follow him @jrc2666.

Essays Reviews
The German novelist Irmgard Keun's life was the stuff of fiction: she was a best-selling debut novelist at twenty-six, published a second bestseller a year later, was blacklisted by the Nazi regime and in exile by the spring of 1936. She was possessed of a spectacular talent. She managed to convey the political horrors she lived through with the lightest possible touch, even flashes of humor.
Essays Reviews
Emily St. John Mandel | 3 books mentioned 8 7 min read
● ●
Reviews
Quick Hits Reviews
Economic, political and social violence are senseless, and render us unable to tell neat linear narratives about injustice and protest.
Quick Hits Reviews
Shivani Radhakrishnan | 3 books mentioned 1 3 min read
Reviews
● ●