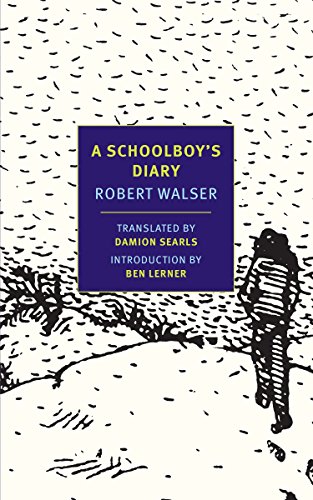 There has been a resurgence of interest in Robert Walser in the last few decades, but for many years preceding that, his readership was limited to those with a particular interest in early German modernism. Walser is something of a peripheral figure in the prose landscape of the 20th century, especially for English-language readers. I attribute this in part to the unclassifiable nature of his work, and also to the fact that he neglected to leave behind a magnum opus, or meisterwerk. Walser instead left us with an armada of what he called “little prose pieces” — over 1,000 in fact — and poems. Such fragmentary oeuvres are often neglected in favor of easily identifiable “great novels” by the more celebrated writers of last century. This is especially the case when the author eschewed the literary scene of his or her day, as Walser did.

In all senses, Walser’s life was one lived on the margins of society. Born in Switzerland in 1878, Walser grew up in Biel, then a small town of around 15,000 inhabitants that marked the border between the French- and German-speaking regions of Switzerland. Walser left school at the age of 14 and spent the next 40 years in a peripatetic existence across Europe. In 1933 Walser was admitted to a sanatorium where he remained until his death in 1956. While Walser published a considerable volume of work up until his confinement, he was never a member of any literary or artistic milieu and one can only assume that this has contributed to his current lack of renown.

One can think of other foreign-language writers whose scattergun approach and hermetic habits ensure they will keep Walser company in relative obscurity amongst today’s Anglophone readers. Fernando Pessoa, the Portuguese author of the fantastically disjointed The Book of Disquiet, comes to mind; as does the hugely underrated American master William Gaddis.

Thankfully for those of us who cannot read Walser in the original German, The New York Review of Books is working to re-introduce the writer to the English-speaking world. NYRB currently has three Walser titles in its “Classics” stable, the most recent of which is A Schoolboy’s Diary. Comprising more than 70 of Walser signature short prose pieces, A Schoolboy’s Diary deserves special attention for the fact that the majority of its contents appear here for the first time in English. Damion Searls does the honors translating and Ben Lerner provides a concise yet crystalline introduction. I must admit that I originally picked the book up on seeing the names of Searls and Lerner rather than the author himself. I have read and thoroughly enjoyed Searls’s translations of Rilke and formed something of a crush on Lerner after reading his first novel and a number of his critical essays on art and poetry. But back to Walser…

The first thing one notices on opening A Schoolboy’s Diary is the extreme brevity of the pieces within it, most running for only a page or two. The book is divided into three parts. The first is titled “Fritz Kocher’s Essays” and consists of an ingenious introduction by Walser himself followed by 20 essays purportedly written by an adolescent schoolboy on topics ranging from friendship to poverty to Christmas. Part II of the book collects a large number of pieces from Walser’s most productive period — 1899 to 1925. The final section is dedicated to a single piece, the longest at 25 pages, titled “Hans.” I will take the Walserian approach of discussing the pieces in reverse order for no other reason than it pleases me to do so, and for the sake of leaving the best until last.

The Part III story, “Hans,” is the longest piece in the book and it opens with a suitably long sentence, of which I will give you only this: “When Hans, somewhat later, after much in his life had changed and he found himself occupied with entirely different things, thought back every now and then…” This sentence, so Proustian in its combination of clauses and its thematic of memory, sets the tone for a story that revolves around the twin tropes of imagination and recollection. Indeed, in this story Walser ploughs much of the same fertile territory as his renowned French contemporary. The eponymous hero of the piece is described luxuriating in a series of recollections about his distant and not-so-distant past. The memories themselves are at times quaint and at times entertaining, but the beauty is in the prose’s celebration of memory itself. The usually coy Walser is at his most unrestrainedly poetic in the following passage:

But Walser departs from Proust in his exploration of the author’s presence in his own fiction. Proust allows himself to use his own name just twice in his million-word epic, A Recherche du Temps Perdu. Walser, on the other hand, is constantly referring to himself as the author of his texts. In fact, Walser even has occasion to chastise himself for such ostentation in “Hans,” saying that as author he “would do best just to stay in the background and keep the most scrupulous silence, rather than pressing forward, which doesn’t look good at all.” A subtler move in this regard is made when Walser digresses from the narrative, saying that he has become distracted from writing by the scent of rösti potatoes. The narrative is soon resumed, but only two pages later the protagonist, Hans, steps into a grocery store redolent of rösti. The astute reader cannot miss Walser’s game here as he masterfully comments on the tendency of the writer to imbue his stories with elements of his life, not least the environment in which he is writing.

The stories in Part II are unlike “Hans,” and more typically Walserian, in that they read like notebook jottings of an eccentric dilettante. They range from memoir to travel writing to fiction, though often they are simply notes towards these things. Indeed there is something refreshingly different about the pared back quality of the pieces. Walser economically inverts the classic axiom of “show rather than tell” and prefers to clearly enumerate the feelings and motivations of his characters rather than leave the reader wondering about them as in the micro-parody of Scandinavian fiction, “A Devil of a Story.”

But like the more fully realized “Hans,” these small pieces are characterised by the same authorial self-consciousness. The writer repeatedly interjects into the narratives and descriptions as if he is embarrassed by having to keep up the charade that there is some omniscient voice dictating the words. After one particularly ornate description of a Swiss lake, Walser inserts a hyphen before addressing the reader directly, almost abashed at how sappy he sounded in the preceding paragraph. At another time, the reader gets a running commentary on how the author believes the story to be progressing, none too well in the light of Walser’s exclamation: “Behold the intricate and involved story I have so rashly embroiled myself in!”

The role of the author in Part I is more complex. The reader of NYRB edition is afforded the same calligraphic frontispiece that would have met the German or Swiss reader opening the original in 1904. Beneath the ornate German text is the translation: “Fritz Kocher’s Essays — Relayed by Robert Walser.” The text opens with an introduction by Walser that begins: “The boy who wrote these essays passed away not long after he left school.” Then follows 20 essays on discrete topics all written in the voice of an adolescent boy, albeit one with an exceptional grasp of language. Despite the disguise and the constant reference to the teacher, it should not take today’s reader long to realise that this is merely Walser in disguise. What a disguise though! This is the kind of chicanery one would expect to see in fiction after the Second World War, but here Walser is deploying it at the start of the century.

There are many other things to like about Walser and this book, not least the beauty he locates in the quotidian and the almost spiritual appreciation he exhibits for nature. But it is Walser’s subtle self-referentiality that I wish to highlight, as I believe it is the quality that marks him out as truly ahead of his time. I was continually surprised at the brazen nature of Walser’s authorial interjections and the familiarity he exhibits with the reader. So much so that at certain times while reading the book I felt as if the sentences could have been the work of a late modernist or postmodernist writer. Take the following: “And so our story has reached a happy conclusion — that’s the main thing, now the weather will be nice tomorrow.” How difficult it is to square such writing with that of Walser’s close neighbors in France, Austria, and Germany. Not in Proust, Kafka, or Hesse will you find such point-blank piercing of the fourth wall of fiction. It comes as no surprise that Walser has long been considered an anomaly in the literature of the 20th century. He is entirely anomalous, but he is a beautiful anomaly and one who anticipated certain trends in avant-garde literature by half a century. Aside from all, this A Schoolboy’s Diary is damn fun to read, it feels like peering into a mind of fantastic imagination. Seldom do authors come along who can do so much with so little. In a world where attention spans are getting shorter by the minute, Walser’s micro-sketches may yet drag him out of obscurity and into the limelight.

Julian Murphy is an arts critic based in Melbourne, Australia. You can find his writing in Exegesis, TEXT, Higher Arc, and Arena.

Reviews
Reviews
Reviews
Sadness might seem too sincere an emotion to ascribe to a novel written by a postmodernist, but Zero K pushes its readers to feel.
Reviews
Nick Ripatrazone | 3 books mentioned 4 5 min read
● ●
Reviews

Reviews
● ●
Reviews
After reading Lispector, we know much more of how “horrible, pure, irrevocable” it is to live.
Reviews
Lucia Senesi | 3 books mentioned 8 min read
● ● ●
Reviews
The notion that a woman’s virtue derives from virginity enjoys a good deal less currency than it once did. How to deal with those for whom it retains value?
Reviews
Rayyan Al-Shawaf | 3 books mentioned 9 min read
● ● ●
Reviews
It appears that the pleasures of ambling, dawdling, sauntering, strolling, and even straight-up walking have been subordinated to the means/end logic of appointments, schedules, and target bodies. Activities get slotted into temporal compartments so that maximum utility is gained and the humble walk is relegated to nuisance.
Reviews
Aengus Woods | 3 books mentioned 1 7 min read
● ●