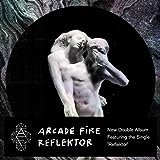 It’s like a heartbeat, the opening bars of Arcade Fire’s “Reflektor” – the first song in the Canadian band’s new project, the one that sets the tone and the refrain: “It’s a reflection.” It’s the thirteenth song if you count backwards, the bridge between the two halves of the double album. It’s the mirror. My pulse quickens. I am alive. “We fell in love, alone on a stage / In the reflective age.” I am not alone here. I wait for it, the rhyme in the second stanza between the French and the English. This is the sublime: “Entre la nuit, la nuit et l’aurore. / Entre les royaumes, des vivants et des morts. / If this is heaven / I don’t know what it’s for / If I can’t find you there / I don’t care” (Between the night, the night and the dawn. / Between the realms, of the living and the dead). I drink the pairing of “morts” and “for” – I am giddily outside myself and deep in the beauty of the bond, if for a moment, between the two languages, the dead (“morts”) and the preposition of the future (“for”) – which in the fifth stanza transforms into the exquisite almost overlap of “morts” and “more.” I am free of the anxiety of not writing.

I love that this song is about trying to find “a way to enter” – to find a portal, a connector – which one can read as the passage to the Underworld that Orpheus seeks in order to attempt his rescue of Eurydice (there are two tracks in Reflektor that make this theme clear, one named for each ancient Greek figure). I also read the song as seeking the throughway for creativity, for getting on with the act of making something. But “Reflektor” does not promise safe passage: “I thought, I found a way to enter/…I thought, I found the connector.” But I didn’t. Even the false promise is assuring. I want to look for my entry onto the page, into a line, an image, a something. I am afraid. I am in the middle of a rough descent, choppy in the air and in need of a pocket of smooth, a glide. The seven-plus-minute “Reflektor” has become a ritual these days. Blast it louder and maybe the portal will appear. Will I dive in?

I am dancing in the backyard under the Brazilian pepper tree, the almost full moon keeping me company. But my movements are small, so I go inside, into the room where I work at my computer, and I dance around the desk – I turn up the music and it pulses through the wires into my ears – I am still too timid to blast the notes into the nakedness of night, or morning, the way I did when I was a teenager in my attic bedroom, or in college away from family and anything familiar. My new roommates knew what the Bjork loop meant. A litany of song to lift another day. Then I moved onto Radiohead. Then the Chilean hip hop band Tiro de Gracia and their first album Ser Humano (human being/to be human).

Many writers, those attempting to write, like to talk about what helps them get in the mood, the zone. The organization of the objects on the desk, a particular pen or writing machine, the ritual reading of a specific text, a stack of books at the ready, music playing in the background. Maybe it’s not working and everything must be reversed: no music, no books, no wireless connection, no flesh and blood people nearby, no. I am pulled in by pairings, duets, correspondences. Elizabeth Bishop’s letters to Robert Lowell and his replies, Virginia Woolf’s Orlando doubled as male and female, Maria Bethânia’s covers of Vinicius de Moraes’s songs in the album Que falta você me faz (how I miss you, or, more literally, what an absence you do to me).

But beware! The guide to the portal of creativity could be unreliable, even dangerous. When I started to read the work of Clarice Lispector, I took in one book after another, after another – I became immersed in the modes of her tragic heroines, their epiphanies seismic, but rarely conduits to change. I needed an epiphany in my own life. Lispector, and Bishop, hurled me to Brazil – that was the portal, for a time. Then a Brazilian scholar of Fernando Pessoa warned me that those who study the Portuguese poet put themselves at risk of uncanny episodes, darkness that cannot be returned, not least of all in The Book of Disquiet. Home again, Wallace Stevens hypnotized me out of writing. James Merrill and his Ouija board made me nervous.

What kind of love is this? Who is the “you” sung to? “If this is heaven / I need something more / Just a place to be alone / ‘Cause you’re my home.” If it is Orpheus, then Eurydice is the recipient of song; or, vice versa. If I am the one to sing, then it’s the person or the thing, the book or the phrase, that will help me find the portal, dare me to dive in, to begin. In “Then Ends Where Now Begins” – an essay in the stunning collection Eros the Bittersweet – Anne Carson writes: “For Sokrates, the moment when eros begins is a glimpse of the immortal ‘beginning’ that is a soul.”

I am still here, now sitting at my desk, earbuds pressed into my ears. I have listened to the song too many times to say. Nothing yet. Let’s play again. I stand up to dance. I remember my Chinese teacher who made us do jumping jacks while counting to eight in unison. That’s what I remember, always eight, infinity: 一 二 三 四 五 六 七 八 She also told us that we had to be friends with our Chinese characters, spend time with them, talk to them, love them. Only then would they love us back, be there for us when we might need them instead of hiding in the silence. I begin a series of jumping jacks and they morph quickly, by number three, into something else all together. I shake my fists, I stretch my arms, I pull at the air above me. It seems that I am here now, I have fallen, I have entered. “Will I see you on the other side?”

Magdalena Edwards was born in Santiago, Chile, and raised in Chicago, Los Angeles, and Washington, DC. Her thesis on Raúl Zurita's Purgatorio (1979), written while an undergraduate at Harvard, led to a stint with the “Artes & Letras” section of Chile's leading newspaper El Mercurio. She received a PhD in Comparative Literature from UCLA with a dissertation on Elizabeth Bishop. Her work has appeared in the Boston Review, The Paris Review Daily, the Los Angeles Review of Books, Rattle, The Critical Flame, Rewire Me, and The Millions. She lives in Santa Monica, California, with her husband and three small children. More at magdalenaedwards.com.