Recently, it has come to my attention that (1) not everyone is a librarian on Twitter or Tumblr, ergo (2) not everyone is intimately familiar with every action taken, decision made, and word spoken by Neil Gaiman, foremost living member of the National Dudes Who Wear Only Black Hall of Fame. In some respects, your ignorance is enviable — it is possible to know too much about even this leader of men, this King of all Geeks. But in at least one respect, it is a crying shame, because it means too few of you have heard of Gaiman’s greatest idea: All Hallow’s Read, a Gaiman-invented yearly tradition where, throughout the week of Halloween, participants give their friends and loved ones scary books. As someone who models most attempts to spread her personal taste on the Marshall Plan, I am apt to seize any opportunity for book-gifting with fevered delight and am eager for this tradition to catch on. 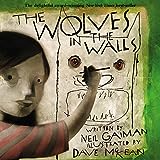 Though I am loathe to imply that King Neil created this holiday for personal gain, it’s impossible to deny that he has written some deliciously spine-tingling books for children. While Coraline’s button-eyed Other Mother and The Graveyard Book’s villainous Jack have been giving 10-year olds nightmares for years now, Gaiman’s attempts to traumatize younger readers have been tragically overlooked. So, for this column, I wanted to call attention to his picture book The Wolves in the Walls. In this funny-creepy story, Lucy hears clawing, gnawing, nibbling and squabbling in the walls of her creaky old house. Even though her mom, dad, and big brother insist that it’s something mundane — mice or rats or bats — Lucy knows in her tummy that it’s wolves, and her beloved pig-puppet agrees. And if the wolves come out of the wall, it is all over — everyone knows that. But how is Lucy to keep everyone safe when no one else believes her? The dreamy illogic of Gaiman’s story is matched perfectly by Dave McKean’s nightmarish photo-collage paintings, all weird angles and blurry edges, creating a picture book that’s riveting, strange, and — the end — enchantingly goofy.

For the I-Can-Read crowd, eager to get their scares independently, Alvin Schwartz’s classic In a Dark, Dark Room is tough to beat. Speak to any child born around its publication in 1984 and I guarantee that they’ll recall one of Schwartz’s hauntingly retold folktales. Despite their format-required economy of words, these stories and their brilliant details — green ribbons that anchor severed heads, boys who hitch rides after being dead for a year, and dark, dark rooms in dark, dark houses in dark, dark woods — make a lasting impression on the reader. Balanced nicely between challenging-but-not-impossible sentences and Dirk Zimmer’s R. Crumb-like, pencil drawn illustrations, this book will be a delightful change for beginning readers hungry for something a bit more startling than cats in hats.

Often, once children start being able to read independently, parents and teachers stop taking time to read out loud to them — but when perfect read-aloud books like Adam Gidwitz’s A Tale Dark and Grimm exist, why would any parent be so foolish? This hilarious and gore-filled adventure sets out to shake off decades of prim, Disney-proper fairy tale retellings and return Grimm’s stories to their bloody roots. Gidwitz takes his heroes from one well-known Grimm’s tale — Hansel and Gretel — sends them weaving through five lesser-known, deeply-gruesome stories to make one overarching adventure, rife with lopped off limbs, cannibals, and truly rotten parents — just as the Brothers Grimm intended. Two things make this book such a perfect read-aloud: first, the woven-together stories give the book a structure that’s half continuous, half-episodic — like a television season. Natural break points are built in, so that the story can be set aside and revisited without its narrative flow deteriorating. Second, Gidwitz peppers each chapter with hilarious direct addresses, ruminating on subjects as varied as the best way to get a girl to fall in love with you (NOT luring her onto a boat and kidnapping her, apparently) and the Devil’s scalp sensitivity. These asides provide a humorous counterbalance to the resurrected Grimmness, making for a tale that’s surprisingly light-hearted despite its protagonists getting decapitated (and reanimated) in the very first chapter.

For independent readers who prefer that all their gory details be factual, Witches: The Absolutely True Tale of Disaster in Salem by Rosalyn Schanzer is an excellent choice. This skinny little book about one of America’s most fascinating historical moments is both meticulously researched and tremendously engaging. Schanzer uses historical details with savvy to give the story immediacy, allowing readers to feel the muck of flood-drenched roads or exclaim with horror at the true ingredients of a witch cake — rye flour, ashes, and the urine of the witch’s victim. Similarly, rather than situating the reader outside the Puritans’ belief system to judge them and feel superior, she depicts their beliefs with anthropological accuracy. This empathetic depiction forces the reader to truly inhabit the Puritans’ terrible “Invisible World,” where demons could torment you and God’s will was cruel and unknowable. Illustrated by the author with woodcuts in black, white, and red, this book is sure to give your budding historian the creeps.

Finally, no column on scary kids books would be complete without a mention of John Bellairs and his Edward Gorey-illustrated classic, The House with a Clock in Its Walls, my pick for advanced independent readers. Sent to live with his Uncle Jonathan after the death of both his parents, 10-year-old Lewis Barnavelt is initially delighted to learn that both Jonathan and his uncle’s best friend, Mrs. Zimmerman, are witches. But when, in an attempt to win back his only friend, Lewis uses his uncle’s magic books to summon a spirit, he unwittingly resurrects the wicked witch who formerly owned his uncle’s rickety mansion and discovers just how dangerous magic can be. First published in 1973, this book and its companions — The Figure in the Shadows and The Letter, the Witch, and the Ring — are noteworthy for the way they ground the chills of a Gothic mystery in the everyday woes of being a fifth grader. Bellairs dedicates equal time to sinister spirits and chubby, un-athletic Lewis’s struggles to bond with his baseball-obsessed classmates. Rather than undercutting the tension, this commitment to emotional realism renders the book’s magical villainy more vivid by creating a stronger bond between Lewis and the reader.

This set of five books is, of course, only a small sample of the many terrifying options that exist for younger readers. For further suggestions, you can visit the All Hallow’s Read website or — of course — talk to your local children’s librarian or bookseller. I bet you will find their ability to read your child’s mind positively spooky.

Margaret H. Willison decided that, if she was still reading children's books at 23, some kind of professional justification for the habit was long overdue. She settled on librarianship. Nothing delights her more than being asked "What should I read next?" Ask for recommendations by finding her on Twitter, @MrsFridayNext or seeking out her semi-coherent ramblings at thepierglass.tumblr.com.

It’s as though the New York Times was using this blog to decide what to write articles about: check out this review of Joseph Roth’s newly released collection of essays, Report from a Parisian Paradise: Essays from France, 1925-1939.

It’s been hard to watch the news the last couple of days. I’ve been interning with chicagotribune.com this summer, so, since Monday, I’ve been pretty immersed in what’s been happening on the Gulf coast – as immersed as one can be, I suppose, with out being actually immersed. Judging from the light traffic this blog has gotten over the past few days, I’m guessing most folks have been spending their online time reading the news, as I have. Aside from the major news sources – CNN, etc. – here’s what I’ve been refreshing many times a day: the WWLTV blog, the Times Picayune Breaking News Weblog, The Irish Trojan’s blog, and The Interdictor. It’s amazing how much all the blogs out there have enriched the coverage of this catastrophe. It’s a great time to be a news consumer.But you may, like me, also need a diversion from the news. Luckily, my favorite New Yorker of the year has just arrived at my doorstep: The Food Issue. I can’t wait to start reading it. Other diversions:The Chicagoist is giving away three books to promote Picador USA’s 10th anniversary event at the Harold Washington Library in ChicagoI might have to try this: Library Thing is a Web site where you can catalog your library. You can tag the books by subject, and the system pulls in Library of Congress cataloging data. Free for the first 200 books and 10 dollars for a 20,000 book limit. (via H2O)Bookfinder.com, the ultimate Web site for tracking down hard to find books, has released their latest list “of the most sought after out of print titles in America.”

I just got back from the Baltimore Orioles game, my first at Camden Yards in several years. I had forgotten how close, compared to Dodger Stadium, the fans sit to the field. Even when I sat in the “Dugout Club” field level seats at Dodger Stadium, I didn’t feel as involved in the game as I do at Camden Yards. It’s much more a city park surrounded by tall buildings, compared to Dodger Stadium’s desert crater feel.Tomorrow I head up to New York on the train. There is wedding planning to be done with Miss Millions, but hopefully some diversions as well.This morning, at a local bookstore, I saw McSweeney’s 13. It’s amazing looking. I’ve got a copy on its way in the mail. Also in book news, Bill Clinton’s keynote speech at Book Expo was well-received, and retailers are salivating over the expected sales numbers for his memoir. And for the Brits, check out this awesome deal being offered by The Times. When you buy a copy of the newspaper you get a bestselling paperback for 99 pence. Now that’s a great reading initiative. (Better than “One Book, One City” anyway)