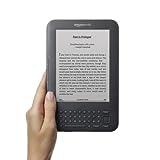 In a new commercial for the Amazon Kindle, a man and a woman lie on beach chairs, glazing beneath the sun.  The tragically average man is trying to read his iPad; due to the glare, he can no longer follow his Patterson.  The woman, Kindle in hand, has no problem with the sun; by the looks of her, she has no problems at all.  The man’s shortcomings are plain, and the message is equally clear: the Kindle will make you sexier and resist the sun.

I find the ad faintly comical.  In an effort to fend off Apple—which builds sex straight into its products—Amazon is grasping at whatever straw lies near.  But for me, the fun ends there.  After years of rising dread—the prophesied End of Books, the Bezos Newsweek cover—“it” is finally here.  No longer are books being pitted against pixels; pointing out that paper isn’t reflective either seems very 2007.  The war is now between tablets, as if the book never existed at all.

In recent years, grief for such losses—music stores, newsrooms, this tradition or that—has become so common and compressed that it’s become a cultural given.  We now swallow our objections, lest they later seem absurd.  A few years ago, I stood in Tower Records, praising its stock to a friend: You can hold a compact disc; buying an album is a genuine act.  And just look at Bitches Brew: don’t you want to have it?

Of course, that Tower Records—along with most of its kind—is gone now; a jazz Pandora station is playing as I write.  The transition was far less wrenching than I’d previously expected; in fact, there was really no pain at all.  While I may miss aimless browsing, thoughts consumed by music, the process now seems needless, like baking bread from scratch.

I might say we’re at a moment when we face this choice as readers—the decision to climb into the boat or stay on familiar shores.  But the decision is not truly ours.  Time and again, these choices are made for us, by a collective sweep and push.  One day, everyone holds an iPod, and the next day, so do you.  Those who resist—the pipe smokers and vinyl hounds, stubborn to the end—come to seem affected, or possibly insane.  The rest of us seem modern, and eventually commonplace.

The prospect of our wonders used to bring excitement.  In the early nineties, after seeing Dick Tracy, I dreamed of his two-way radio.  How cool would that be?  I thought.  Incredibly, I found out: as two-way radios came to market, then gripped every inch of our lives, they became not cool at all.  Awe gave way to grabbiness: digitize everything, please.  Books are the latest items to be forced into the hole.

So I should probably shrug at progress and enjoy a digital Roth.  But—and at this stage, I know the pointlessness of saying it—books feel different to me.  Everywhere I’ve lived, they’ve surrounded me; nearly every night since childhood, I’ve held one in my hands.  My mother was a librarian; my father sat me on his lap and read Tom Sawyer aloud.  I now do the same with my son, though he isn’t quite ready for Twain.  Everyone, to some degree, has a variation of this history.

So here is the dilemma: you love your books, with their meaning and their warmth, but you’re not some weepy sap.  You find romance in the object, yet none in being an outlier, unreasonably clinging to relics.  Do you get on the boat—with its gorgeous women and glare-free screens—or ignore it and hold on?  Had I asked myself this question around the time of my Tower trip, I would have flared out my response: I’ll never switch, you Logan’s Run drone.  Books are too vital to trade for some overmarketed whim.

But in the time since, I’ve given myself over to plenty of similar whims—and against all odds, they haven’t ravaged my soul.  Electric books hold no appeal to me; they feel like viral death.  But so did music taken from a set of coiled wires.  The sounds were what was important.  So my answer now, however reluctant, is this: I’ll hold on to books for as long as I can.  I’ll read them, lend them, fall asleep with them.  I’ll hope they hold their own, that novelty will wane.  And if it doesn’t—when it doesn’t—I’ll find myself among a crowd that I’d never hoped to join.

(Image: circuit board, from botheredbybees’s photostream)

The Future of the Book

This week, there were a pair of updates on the copyright cases against Google that are being brought by publishers and authors.Initially, the two groups had been pursuing two separate complaints against Google, but this week Judge John Sprizzo consolidated the two cases into one. According to MarketWatch: “Sprizzo’s streamlining was inevitable because the authors and publishers accuse Google of virtually the same thing, and plan to use the same kind of evidence.” It sounds like that news is probably good for the authors and publishers if not terribly consequential.The other bit of new news, that the case won’t be decided until early 2008, is undoubtedly bad for the anti-Google Books camp, both because it means the authors and publishers will have to spend more money going up against deep-pocketed Google, and because Google Books will continue operating unfettered for over a year until the case is handed down, as eWeek explains.Now that we know that Google Books turns searchers into buyers, not stealers, perhaps it’s a good time for the authors and publishers to broker a compromise with Google.

As Google stokes controversy with its Google Print service, Amazon has unveiled its own digital book offering, one that’s sure to make the publishers happy. Amazon is launching two services, Amazon Pages and Amazon Upgrade. According to an AP story on the new products: With its new Amazon Pages service, Amazon.com Inc. plans to let customers to buy portions of a book – even just one page – for online viewing. A second program, Amazon Upgrade, will offer full online access when a traditional text is purchased. Both services are expected to begin next year.CEO Jeff Bezos shared some addition details as well: For Amazon Pages … the cost for most books would be a few cents per page, although readers would likely be charged more for specialized reference works. Under Amazon Upgrade, anybody purchasing a paper book could also look at the entire text online, at any time, for a “small” additional charge, Bezos said. For instance, a $20 book might cost an extra $1.99. And Bezos offered up a quote that was most certainly directed at Google’s recent run ins with publishers: “We see this as a win-win-win situation: good for readers, good for publishers and good for authors.” The story is also filled with positive comments from different publishers and an Authors Guild representative. Random House released a statement saying it plans to “work with online booksellers, search engines, entertainment portals and other appropriate vendors to offer the contents of its books to consumers for online viewing on a pay-per-page-view basis.”So, it seems to me that a showdown between Amazon and Google may be shaping up in the digital books market. Will publishers opt out of Google Print en masse and back Amazon, who, in their eyes, seems to be offering a more secure revenue stream? More importantly, are people ready to pay for books by the page, and will they turn their backs on Amazon for trying to spoil Google’s free books party?Meanwhile, at the Official Google Blog, the Googlers are extolling the virtues of the public domain books that have recently been made available at Google Print. The post links to a number of searches that show some of the breadth of material that is now available at Google Print. Note that they are positioning this as “Preserving Public Domain Books.”Previously: The publishers’ big blunder

The New York Times has been highlighting a new trend. With all the Kindles, Nooks, iPads, and whatnot being unwrapped on Christmas day, (to home in on just one of those devices, they say Amazon may have sold over 8 million Kindles this year), what was once a day of rest from shopping is likely to be a booming day for ebook sales. Some in the publishing industry are even beginning to see the ebook emergence as a ray of light in a stagnant industry.

It’s pretty clear by now that ebooks and ereaders are a fully mainstream technology. Even among the avid, book-worshiping, life-long readers that frequent The Millions, ebooks are surprisingly popular. in fact, looking at the statastics that Amazon provides us, about 15% of all the books bought by Millions readers at Amazon after clicking on our links were Kindle ebooks. Put another way, that’s about one out of every seven books.

For starters, here are the top-ten most popular ebooks purchased by Millions readers in 2010. You’ll notice that these aren’t all that different from the overall Millions favorites — to the extent that they are different from other books popular with our readers, these books tend to skew towards the page-turner (Tolstoy notwithstanding) and the cheaper (all but one are, as of this writing, at or below the $9.99 magic ebook price point).

And in this fractured ebook landscape, you’ve also got your NookBooks, Borders ebooks, Google ebooks, and Apple ibooks. All of these purveyors happen to do a brisk “business” in “selling” free, out-of-copyright ebooks, but readers may prefer Project Gutenberg, an unaffiliated site that’s been making free ebooks available for years.

In a short piece at silicon.com “futurist” Peter Cochrane talks about a potential business idea that I’m surprised doesn’t already exist: digitizing personal book collections. As I’ve said in the past, I support the various book digitization efforts from Google and others for these projects’ potential to make the sharing of knowledge easier, not because I want to read all my books (for free or otherwise) from my computer. However, I am intrigued by the option of digitizing at least some of the books I own – perhaps books I’ve read and don’t intend to read in full again. It would be nice to have searchable, digital copies of these books to refer back to, but there are some books that I could never trade in for digital doppelgangers.