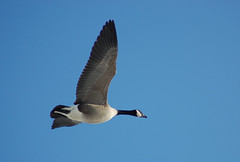 Inside a quiet house, you can hear their uncertain, quavering calls bouncing off each other.  It seems less an evolved system of communication than a childhood game of telephone. Plaintive, muffled wails inside a dense, confused cacophony.

You’d think they would develop a more sophisticated avian GPS system, glow-in-the-dark eyes or bioluminescent feathers.  Instead they hurtle themselves willy-nilly into nothing.  If they’re lucky, they won’t meet power lines or find themselves lured into the ghostly lights of airports.  They’ll travel by faith and with alacrity until the fog burns off or blows away, whichever comes first.  Some hour when they least expect it, they’ll get their bearings, and the world will have some order to it again. A steady horizon to navigate by, a solid earth for take-offs and landings.  Until then, the geese muddle along, trying to make sense of the night, of each other.

Being a writer is like this. Having all the certainty of a goose inside a cloud. You fly by moving your fingers across a keyboard, hoping to write your way out of confusion and into something that makes sense to you and others.  Hoping people will recognize your voice, your unique and universal language.  English, French, or Farsi.  Perhaps if you do it well, you will write your way into a community. Some company for foggy nights.

Three months ago, the fog arrived early, blending with the gray blankness of a December afternoon.  I was supposed to be in San Francisco, one foggy city to another, to read from my first novel.  Standing among writers in a giant conference room in the San Francisco Public Library, all of us members of the Association of Iranian American Writers, all of us taking part in We Are All Iran, an event to mark the six month anniversary of the Iranian Elections.  It would have been my first reading.

For weeks I practiced for my ten minutes at the podium, planted in pantyhose and an itchy skirt on the carpet in front of my husband.  Our dog hated my reading voice and sat on my toes, whining.  Or maybe she just sensed my fear, the million ways I thought I might fail myself and everyone else.

For one thing, I had not even seen my own finished book.  Because the event was a few weeks before the release date, my publisher had copies flown in directly off the press.  I would be meeting my novel, Bone Worship, for the first time in a room full of passionate Iranians, all of whom had bigger concerns than my literary debut.  They were there to talk about the Green Revolution, about Mousavi and Ahmadinejad.  They would unveil a sculpture of Neda, miraculously restored somehow by art, the obscenely vivid blood no longer framing her beautiful face.  It was important, it was dramatic.  I was a newbie, a fiction writer.  I wasn’t sure how I fit in, if at all.

Afraid of being asked questions about the political and humanitarian crisis while armed with only an outsider’s knowledge of Iran, I read every news story I could find, yet I still felt ignorant.  Maybe it wasn’t a matter of knowledge at all, but rather identity.  I had no war story to tell.  The child of an Iranian father and an American mother, who grew up treated “white.”  Any racism was peripheral, some muted noise once when my brother and I were denied entry into a Christian nursery school for being “of a heathen race.”  My friends said they often forgot about the Iranian part of me, and so I did too.  It was almost a joke.  I had a Southern accent: not by way of Shiraz, but of Gaffney, South Carolina.

I was intimidated by the thought of meeting so many brilliant Iranian American writers – Esther Kamkar, Persis Karim, Angella Nazarian – who write beautifully and with distinct political power, when I had a handful of silly stories to my name about people hibernating underground, about funeral directors, about sullen suburban teenagers eating ant poison.  I had never written a serious story about race.  I had never – gulp – even called myself “Iranian American” before.  Would I find my community, or would an audience of Iranians laugh at me?

I never found out.

The fog rolled in.  Joining it was a slight suggestion of ice, a hazard that merely glazed people’s yards and not the air strip.  It was enough, however, for all the flights out of the Eugene airport to be canceled. When I walked back to my car, my suitcases dangling stupidly from my hands, I heard the geese for the first time over the silent airport.

I didn’t think then of the anniversary of the elections, or of the opposition in Iran clashing with the Basij.  Nor did I think of everyone else, navigating the notorious Tehran traffic, trying to buy basic groceries at insanely inflated costs.  I didn’t think of my family there, the demonstrations outside their windows like a never-ending parade.  Normal life going on in a way we would never consider normal, all of it occasionally punctuated by bursts of violence.   I didn’t think about that.  I just thought about what was supposed to be my first reading.  My first time as an Iranian American.

I went home and unpacked my bags on the bed, my clothes heavy and damp.  My dog came and stared at me, hopeful I wouldn’t start reading aloud again.  I put away something I had written on a note card to read at the event, an insufficient dedication to the people of Iran, from their half-daughter who didn’t speak Farsi, who had never seen their country, but who hoped to one day.  Who still hopes to.

Now that it was no longer needed, the sun came out and lit up the whole room.

Bone Worship, the novel that I would have read from, is about an American daughter trying to connect with her Iranian father, across chasms real and imagined.  I didn’t realize when I wrote it that I was trying, in my own way, to write a bridge to my family in Iran.  I didn’t know if they would ever see it or if it would be translated so they could understand it.  And yet, a few weeks after my canceled flight, I learned that one of my Iranian cousins, who speaks English, found my book online.  She showed it to my grandmother in Tehran, who couldn’t translate the title or the text, but who stopped and ran her fingers over my photograph on the jacket flap.

My grandmother had never seen me before.  Maybe a baby picture, once, thirty years ago.  Now, for the first time, she recognized something in my face, a nearly perfect resemblance to one of my aunts.  She looked at me, then, on the other side of the world and the other side of a book and saw someone who was, at least in her eyes, recognizably Iranian, and perhaps recognizably family.  Even though we couldn’t see or hear each other.  Even though we were still separated by that chasm, we were moving closer, traveling by faith.

Elizabeth Eslami has published stories in over a dozen literary journals, including G.W. Review, Minnesota Review, and Crab Orchard Review. Her debut novel, Bone Worship, about the complex relationship between an Iranian father and his American daughter, has just been released by Pegasus Books.

Essays
Essays
Here’s a modest proposal: Let’s outlaw the literary biography.
Essays
Bill Morris | 1 book mentioned 9 6 min read
● ● ●
Essays
My head might be full of kilotons, of radiation burns, of calculations about radius and wind speed, but at least I don’t have choices to make about any of this. Whether we survive this has nothing to do with me.
Essays
Amy P. Knight | 1 book mentioned 1 5 min read
● ● ●
Essays
Think of the long list of visual cues we take for granted. How do we know, without struggling to process the fact, that a scene shot from three angles by three cameras is the same scene? How can we tell the difference in emotional register between a series of rapid-fire cuts and a single, slow, agonizing take?
Essays
Rob Goodman | 1 book mentioned 19 11 min read
● ● ●

Essays
Marginalia is a flash of insight or anger, ossified, trapped in literary amber where it can be retrieved for a later reckoning.
Essays
Dustin Illingworth | 1 book mentioned 4 5 min read
● ● ●
Essays
But I must come clean. As fun as it is to get a sale, my currently listed volumes are moving at a pace which would take some 70 years to empty my e-store. Of course, that's assuming people will continue to prize certain books: great out-of-print novels, first editions, volumes signed by the author. As e-books continue to take market share, paper books may be destined to become decorative objects, like cupboards built to hold commodes or vinyl album covers.
Essays
Lawrence Tabak | 1 book mentioned 17 5 min read
● ● ●
Essays