Apple’s launch last week of the iPad has ushered in a new era of competition in the publishing industry as tech giants expand their footprint in the oldest of old media, books. 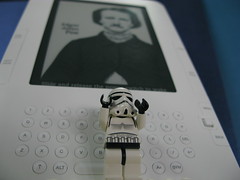 Interestingly, at least among serious readers and industry watchers, a skirmish on the margins has taken the spotlight. On Friday, Amazon unilaterally and without any explanatory public announcement, removed all books by publisher Macmillan from its virtual shelves. This included both ebook and paper editions and impacted books as varied as Hilary Mantel’s Wolf Hall and Atul Gawande’s The Checklist Manifesto.

At the heart of Amazon’s move was a dispute over pricing. Essentially, Amazon, with its massive footprint in the publishing industry, is continually trying to dictate terms to publishers in order to maximize profits. Macmillan, seeing Apple (and therefore competition for Amazon) on the horizon, decided to hold its ground and retaliated.

As a result, two models are now in play. Under Amazon’s current model, it utilizes its near monopoly position to take an extremely steep wholesalers’ discount (up to 70%) when it buys books from publishers, and it sets prices where it wants, often offering books at bargain prices in order to draw shoppers into Amazon while still eking out a profit.

The opposing model is the agency model that treats Amazon not as a wholesaler but merely a sales force. The publisher sets the prices, and Amazon takes a 30% commission of whatever that price is. As best I can tell, the push for the agency model only applies to ebooks. Apple is touting this model with the iBook offering on the new iPad, and MacMillan intends to extend these terms to all outlets that sell its ebooks. (For more on how all this works, check out Charles Stross’s informative piece.)

For Amazon, it’s clear why the current model is preferred. The only way it can differentiate (and lure new customers into its Kindle ecosystem) is based on price. If the agency model succeeds, technically any other player out there with the wherewithal could come along and sell ebooks on exactly the same terms that Amazon does.

This is probably good news for readers. In the long-term it will spur competition in the ebook and ereader space that will inevitably push away from DRM, closed ecosystems, and expensive hardware. In the short term, however, those readers demanding that ebooks be priced at $9.99 or less are going to be frustrated. If publishers can set pricing, they are going to set it higher than Amazon would (In a memo obtained by Publishers Lunch, Macmillan has said it aims to price its ebook new releases between $12.99 and $14.99). These higher prices could definitely slow the growth of the ebook market, something I suspect may mainstream publishers wouldn’t be too upset about. On the other hand, publishers would have the ability to adjust prices, and if lowering prices ends up increasing volume and maximizing profits, they’ll undoubtedly do it.

It’s worth noting as well how Amazon has responded to Macmillan in this case and how a pattern of behavior is emerging. We noted nearly a year ago, when dicussing both cutting its affiliates out of the Kindle ecosystem, that the threat that Amazon poses is one of control. In the emerging world of ebooks, where the books you own are not on your shelves but are digitally tethered to a big corporation, this is not just concern in principal. This was made clear last July when Amazon managed to remove from afar ebooks from its customers’ Kindles.

Amazon on Sunday proposed in a posting on the Kindle Community board that it had all been part of the effort to fight for cheaper ebooks. Readers, especially those who read ebooks, will have to decide whether cheap ebooks are worth the cost of Amazon’s quest for monopoly control.