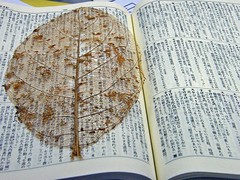 Let’s say that you’re on the couch tearing through a great weekend book, you know, one of those novels you completely devour in two days or less, and you come upon a cute little piece of paper hiding between pages 216 and 217. It’s not colorful, fairly unassuming, and not much larger than a Polaroid picture. The top of the page reads “Erratum.” This Latin word sounds important, fancy even, but it’s really just a sneaky way of saying “We screwed up.” And not just “We screwed up,” but “We had multiple people, whose full-time paid job is to find these errors, look through this book with a fine-toothed comb, and we still let a few things get past us.” I agree, “Erratum” sounds much, much better.

I hadn’t really thought about them in years. Why would I? They’re just not the kind of things you see every day. I read all the time, far more than average, yet I find four-leaf clovers more frequently than these elusive declarations.

It wasn’t even a book that got me thinking about these.

I was reading a recent issue of Interview magazine (which unlike the rare “Erratum” has far too many inserts) in which Miranda July was asked 20 questions by 20 different people. Among these inquiring minds were It-Lit icons including Jonathan Lethem, George Saunders, Dave Eggers and Lorrie Moore to name a few. To be completely honest, most of the questions were a little too cute or ironic for my taste. I won’t say who ridiculously asked, “If you were told that you had to live inside a work of art, which would you choose?” And it wasn’t even an author that asked the most interesting question, it was harp-playing, pixie-voiced songstress Joanna Newsom. I’m paraphrasing, but her question was basically this; name one thing you don’t care about but most people do, and name one thing you do care about that most people disregard. July’s answer to part one? Alcohol. Part two? Errata. Wait a second. What? Do you mean those little lists of corrections found in books? That is exactly what she meant, and she collects them.

I can’t quite explain why, but this caught me off guard. I guess I was expecting her to say something more along the lines of Rivers Cuomo bootlegs. She could have said she collected stuffed albino chinchillas and I would have been less surprised.

Unlike most things you might collect, say unopened action figures or LPs, you can’t just go into the local resale shop or flea market to look for them. Over the past 25 years, July said she has only been able to find a dozen or so. A dozen? That is certainly not a bountiful harvest by any means. But it certainly is patient. And I love that. It might even be a little bit lazy. To build his or her collection, the collector of this niche item has to do nothing more than sit around and read. Didn’t find one? Well, maybe next time. No big deal. It was still a pretty good book, right?

If I had to put my finger on the one thing I like most about Erratum sheets, it would have to be this; it is a tangible piece of evidence that proves that famous Alexander Pope quote to be true, to err really is human. And thank goodness for that. In this world, that is increasingly becoming mistake free, it’s nice to see an honest up-front admission of human error. Not that I want people to screw up, I don’t. But when you can clear up every blemish with Photoshop, spell check every misspelling, and delete and re-post a drunken status update, it’s a breath of fresh air to hear three little words… I. Screwed. Up. But if you want to sound fancy, you can say Erratum.

Jeff Martin is an author and editor. He has written for publications including Publishers Weekly, Poets & Writers and GOOD, among others. His latest book is The Late American Novel: Writers on the Future of Books. Jeff lives with his wife in Oklahoma.

J.K. Rowling’s slow, inexorable slide out of retirement continues. As we noted a couple of months ago, “For someone who’s not writing any more books about Harry Potter, J.K. Rowling sure is doing a lot of dabbling.”Earlier this year, we wrote about one of Rowling’s post-retirement dabblings, the production of seven handmade copies of Beedle the Bard, a book of “wizarding fairy tales” referred to in the Harry Potter series. Amazon spent $4 million on a copy, and then used it to market a writing contest. Part of the prize, incidentally, was the opportunity “to spend a weekend with the rare and delightful book of fairy tales (security guards included, of course).”Now that prize doesn’t look quite so exclusive, as Bloomsbury and Scholastic have made an edition the book available for the masses for just $7.59 and arriving in early December, just in time for the holidays. Amazon is going one further, offering up to 100,000 pricier facsimile “collector’s editions,” with “a reproduction of J.K. Rowling’s handwritten introduction, metalwork and clasp, and replica gemstones,” as well as various other accouterments.All net proceeds go to a charity co-founded by Rowling.

At The Morning News, Robert Birnbaum interviews Jonathan Safran Foer. In his email announcing the interview, Birnbaum tries to elevate the current level of discourse surrounding Foer, who seems to have a target painted on his back these days: First, a word about what you will not read here – no reference to Steve Almond’s kvetchy and disingenuous hand wringing about Jon Foer’s new novel (at MobyLives.com)or the exponentially vile and bombastic heaving by Harry Siegal about the same at the loathsome and vile NYC weekly that produces journalistic marvels such as “50 Loathsome New Yorkers” and includes novelists on that hit list.The interview is long, and once again portrays Foer as thoughtful and unwilling to respond to criticism or praise, preferring to concentrate on just the reader and the writer:Foer: Really good books are books that have two authors, the reader and the writer. Or maybe the idea of an author is actually just a combination of two people, the reader and the writer? So when writing you use the word “tree.” Four letters. Very, very short word. Fits a couple millimeters on a page. But in the reader’s mind it becomes a kind of idealized version of a tree, and that tree is different for each person who reads the book and because of that a book is customized for each person in a way a song never could be and as a painting never could be.

Quick Hits
C. Max Magee | 1
● ●
Quick Hits
It goes like this: belittle a novelist's finest work to date - preferably by tossing around unsupported adjectives. Then, five or six years later, when the novelist in question brings forth his next book, complain loudly about how lame it is compared to his previous masterwork, which, it is to be inferred, you adored. Bonus points if you actually use the word "masterwork."
Quick Hits
Garth Risk Hallberg | 26 2 min read
● ● ●

It is now being reported that an article in the June issue of Vanity Fair will describe Clinton’s struggles to get his new memoir, My Life, completed on time. The reports also confirm fears that the memoir will not provide the deeper reflections that people were hoping for. As this Reuters report indicates, Clinton will have only spent about 5 or so months on the book by the time he is finished. And the AP is reporting “the book will include few mea culpas about Mr. Clinton’s role in the Monica Lewinsky scandal or other matters, Vanity Fair said.”I wanted to quickly thank four outstanding blogs that have linked to me in the last couple of weeks: beatrice.com, golden rule jones (who will be my competition in Chicago), LA Observed, and largehearted boy. Check them out.

The Litblog Co-op’s second selection has arrived! What is it? How will it be received? Will the Co-op be praised or reviled? You’ll have to go to the blog to find out.