Bryan Gilmer of Durham, N.C., teaches newswriting at the University of North Carolina at Chapel Hill and writes for institutional and corporate clients. Until 2003, he was a reporter at Florida’s largest newspaper, the St. Petersburg Times. He has just independently published a crime thriller novel, Felonious Jazz. 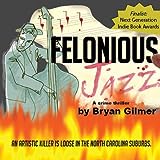 Last week, I created a Kindle version of my indie crime thriller novel, Felonious Jazz, using the tools at Amazon’s Digital Text Platform. It took about nine minutes, a “why-not” side project alongside my trade paperback, which I published using Amazon’s print-on-demand company, CreateSpace.

My Kindle edition went live last Monday at $7.99, so I announced it on a couple of Kindle message boards online. By Wednesday, I’d sold one copy. One! Message board replies said, “If you want us to try a new author, give us a really low price. It’ll generate sales and reviews.” So I marked it down to $1.99 Thursday morning and posted the price change on the same boards. What happened next was remarkable:

As of 5 p.m. Friday – about 36 hours later – Felonious Jazz was the No. 1 selling hard-boiled mystery on the Amazon Kindle Store and the 17th best-selling title in Mysteries & Thrillers – the only title not by huge names like John Sandford, Michael Connelly, and Elmore Leonard in the top 25. Its overall Kindle sales rank was as high as 133rd out of all the 283,000+ fiction and non-fiction titles available in the Kindle Store.

I thought, now that I’m in the rankings, I shouldn’t have to be so cheap. I bumped the price to $4.99. Sales continued, but at a slower pace, (and Felonious Jazz has slipped in the rankings. I probably should have stuck with $1.99 longer). I also drew in some people who just buy cheap Kindle offerings who don’t normally read the genre, though they may have been less likely to enjoy it than fans of similar books.

But overall, what a no-budget way to gain visibility. A few big lessons here: Readers expect Kindle books to be much cheaper than dead-tree books (because they know it costs less to publish them and they can’t share them and worry they won’t have them forever). A cheap price is enough to buy your way up the rankings among national names with a zero-dollar PR campaign. Now that there’s a free Kindle app for iPhone, the potential audience for a Kindle title is not just the half million people who spent $359 for the device but many times that large. It’s surprisingly comfortable to read book text on the Kindle iPhone app. If you haven’t tried it yet, get the app and grab my free sample from Amazon, and you’ll see what I mean. It’s transformative to have a book you’re reading (or several) on your phone to pull out whenever you have to wait in line or for an appointment.

More worrying for conventional publishers is that Kindle board posters don’t think big publishers are pricing their titles cheaply enough, and when prices get above $9.99 they get angry about it. I’m not sure whether the high prices are due to higher costs, more parties to share the revenue with, or the fear of cannibalization of paper-copy sales. (But the advantages! Near-zero production costs. No warehousing. No shipping. No returns. New edition at any moment. Never out of print. And the Kindle makes people read and buy more titles.) Could big publishers go from being at a tremendous advantage to competing for top-25 sales rankings – if not profits – with a guy in his home office? Will a Netflix-like company launch without the expensive legacy infrastructure of the big New York houses and take advantage of elasticity of demand at much lower price points? As I type this I realize – maybe that’s Amazon.

A bad side effect is that without barriers to entry, a lot of non-professional-quality content creates clutter. But to some degree, crowd sorting (via online reviews and such) can cope with that.

Bryan Gilmer of Durham, N.C., teaches newswriting at the University of North Carolina at Chapel Hill and writes for institutional and corporate clients. Until 2003, he was a reporter at Florida's largest newspaper, the St. Petersburg Times. He has just independently published a crime thriller novel, Felonious Jazz.