This isn’t the music post I’d planned on writing today. I was going to tell you all about the time a certain British guitar legend from the 60s shouted at me and a friend (yes, at us – specifically at us) across a packed hall in Greenwich Village eleven years ago. I was all set to tell you about that. But that’ll have to wait. Another time. 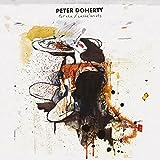 You see, I’ve been sidelined by a contemporary album. This almost never happens. But on Friday I bought Grace/Wastelands, the new solo album from Pete Doherty. I popped it into the CD player when I got home, strapped headphones onto my unsuspecting head, and within seconds I knew I was done for.

I’d always had an appreciation for Pete Doherty. Despite all his personal problems and addictions, the few tracks I’d heard from The Libertines and, later, from Babyshambles, I’d liked. I found his writing to be sharp, engaging. But I still wasn’t prepared for this. Grace/Wastelands is a masterful album from start to finish. Thoughtful, evocative, musically textured and, above all, beautifully written and sung.

It’s been about 55 hours since I first put the CD into the player, and virtually every waking hour has been spent listening to it. Even when I was physically elsewhere – with friends or family – I had it going through my head. I was pretty much useless as a friend or son for the last couple of days. I was mentally trying to redirect every conversation toward contemporary music. I wanted to talk about this record, but without getting sidetracked by a discussion about Tabloid Doherty.

I wanted to express to people just exactly why their lives were incomplete if they hadn’t experienced the sweeping organ in the final minute of “Lady, Don’t Fall Backwards,” or the way the vocal melody of that song floats down and then up and then down again. I wanted them to experience the opening acoustic strum on “Arcady”, the lovely, lilting harmonies that belie the sadness of “Sheepskin Tearaway” and to hear the catch in his voice when he sings the word “scars” near the end of the song. They needed to hear the ragtime piano on “The Sweet By and By”. They needed to both hear and feel the rhythmic pulse of “Last of the English Roses” and the way one is left hanging before hearing the final consonant in the phrase “…her Winstons from her Enochs.” And, especially, the evocative “Salome” – perhaps the finest song on the album – with great guitar-playing by Doherty and Graham Coxon from Blur who share guitar duties on almost every song on the album. This is an album full of melancholy – sometimes wistful, sometimes painful. Always gently poetic.

This level of musical obsession happened frequently when I was younger. In school and in early university I would breathe Beatles and Rolling Stones albums. Then a bit later I would inhale albums by The Kinks and Bob Dylan. In the years that followed, the occasional album would turn into an obsession – but it, too, was generally something from an earlier era. Rarely something contemporary. In the past decade, I can clearly recall the few cases of me obsessing over something current: In The Belly of the Whale by Canadian songwriter Danny Michel, Blur’s 13, Michael Penn’s Resigned and, especially, each successive release from The Walkmen who hit a new peak last fall with their stunning You and Me (about which – more [much more] in a future post). So it’s a pretty limited list. There’s nothing fleeting here. Every one of these albums is part of me, even after the initial obsession subsides. And I can add Pete Doherty’s Grace/Wastelands to the list.

Andrew Saikali is a writer in Toronto, Canada, and passes his days as a copy editor with The Globe and Mail. He spends his moments of leisure listening to music, reading, watching films and prowling the streets of Toronto, and he feels that he is long-overdue for a vacation so that he can do more of those things. At any given time, he is probably pining for distant shores and really should do more traveling and less pining.

A very cursory beginning!”Lillubulero,” in Lawerence Sterne’s Tristram Shandy“La ci darem la mano,” from Mozart’s opera Don Giovanni, in James Joyce’s UlyssesThe “Hoffmann Barcarolle” of Jacques Offenbach “played” by Sherlock Holmes on the violin in Arthur Conan Doyle’s “The Mazarin Stone” (the piece itself comes from Offenbach’s “Tales of Hoffmann”, a musical rendering of some of the German Romantic writer, painter, and musical composer E.T.A Hoffmann’s tales)Venus in Furs by Leopold von Sacher-Masoch becomes “Venus in Furs,” by the Velvet UndergroundBeethoven’s 5th Symphony features prominently in E.M. Forster’s Howard’s End (&, on a more scholarly note, Forster’s use of “the rainbow bridge” imagery, in the furtherance of the “only connect” theme, is taken from Richard Wagner’s Das Reingold, wherein the rainbow bridge appearing at the end conveys the gods to their paradisical new home Walhalla, see John Louis DiGaetani’s Richard Wagner and the Modern British Novel)The Beggars’ Opera by John Gay becomes “Mac the Knife” by Bobby Darrin, et al.”Norwegian Wood” by the Beatles becomes Norwegian Wood by Haruki MurakamiE.T.A. Hoffman’s The Life and Opinions of Tomcat Murr, the fantastical autobiography of a literate cat interspersed with the autobiography of his musician owner, Kapellmeister Kreisler (a fictionalized self-portrait of Hoffmann, himself a musical composer (as above); Tomcat Murr was the name of Hoffmann’s own tabby cat – and performs some katzenmusik himself in the novel)Alexandre Dumas (fils)’s novel La Dame aux Camelias becomes Giuseppi Verdi’s opera La TraviataAnd finally – though I come by this disingenuously because I haven’t read it – Brett Easton Ellis’ American Psycho: I hear tell that it’s got some very funny discussions of pop music, including the assertion that Genesis was the greatest British band of 80’s…

Whenever I tell someone that my favorite songwriter is Bob Dylan, the response I usually get is some kind of respectful acknowledgment of his status as a lyricist. And there’s no question that Dylan has written some of the most extraordinary lyrics – depending on the period, and on his mood – they’re wise and weary, playful and inventive, surreal, enigmatic, sometimes inscrutable. Sometimes they’re familiar but then they twist in surprising ways. Rarely are they banal. Rarely are they boring. Even when writing a love song, Dylan finds new language and new ways to express the most familiar feelings of all. So, yes, a great lyricist. Whole books have been written, whole careers launched, with discussion of the lyrics of Bob Dylan. But reading Bob Dylan and listening to Bob Dylan are two completely different experiences. And it’s his melodies, vocal phrasing and musical arrangements that lift these masterful words off the page, animating them, haunting them, imbuing them with mystery. Consider the album John Wesley Harding. Recorded in Nashville, just as 1967 was giving in to 1968, just a few months after recording The Basement Tapes, those legendary home recordings that would begin popping up on bootlegs in the late 60s. The Basement Tapes retained much of the surreal imagery of the 1965-66 albums, but without the amphetamine rush, and without the grandeur. The Basement Tapes (recorded with members of what would soon be The Band) came across as looser, playfully laconic. And a year or so after John Wesley Harding, Dylan would be back in Nashville, recording Nashville Skyline. Lovely in its own way, full of country ballads and country honk, “Lay Lady Lay” and “Nashville Skyline Rag.” Formal, a very specific style governing the album; lyrically modest, straightforward, voiced by a Dylan no one had really heard before or since. So then: John Wesley Harding, sandwiched between two quite different and unusual projects, sounding like neither. An acoustic album, but surprisingly fast, focused, tight. Urgent drums pushing forward, but not frilly. Acoustic guitar and occasional piano and bass. Harmonica sometimes taking the lead, not just coming in for punctuation. So, an acoustic record, but not folk. Full of muted rock drums, so rock in an unusual way, but not electrified. And despite its Nashville roots, not country. And definitely not “country rock.” And through it all, a voice sounding not quite like any other Dylan voice. Clear, every syllable mattering, mysterious, even a bit pinched and restrained. Tight-lipped. The lyrics draw from the old west; there is biblical imagery; there are story-songs, morality tales. Instead of surreal and symbolic, the lyrics are mysterious. Information is withheld. The mystery is in the action, in what the characters are doing. Much is left hanging, including the “why.” Again, tight-lipped lyrics delivered in a tight-lipped voice. On some songs: the title track, “As I Went Out One Morning” and “All Along the Watchtower,” the urgency is pushed through by rapid bass and drumbeats. Rapid, but quiet. On “All Along the Watchtower,” the harmonica is front and centre, setting up the song, in the same way an electric guitar might in a more conventional rock arrangement. This was before Jimi Hendrix re-imagined the song so completely that subsequent live versions by Dylan abandoned the muted mystery of the John Wesley Harding original for a more extroverted electrified expression. Same words, still ominous and potent, but quite different from the more subtle original. On the more subdued tracks: “I Dreamed I Saw St. Augustine” and ” I Pity The Poor Immigrant,” the hushed beauty of the vocal melody steers the songs. The muted instrumentation and voice cloak the whole experience, obscuring it, letting the meaning hang. “The Ballad of Frankie Lee and Judas Priest” is more about structure than melody, packing a great deal of narrative into its economical frame. The instrumentation is deliberately repetitive, and after a while, the hypnotic familiarity of it allows it to almost recede from your attention, letting your mind focus on the story. By the end of it, you feel you’ve been listening to a novel, a morality tale clocking in at a mere five minutes. One of the best songs on the album, “Drifter’s Escape,” isn’t as long, but it’s just as complete. A tiny, enigmatic, short story. Courtroom drama, social satire and what could either be divine intervention or blind luck, depending on your worldview, all rolled into one. John Wesley Harding is not a rollicking, joyous album. The last two songs: “Down Along The Cove” and “I’ll Be Your Baby Tonight” are lighter fare, more affable, but that only serves to put the rest of the album in stark contrast. It’s a strange, unnerving album, and it leaves you with more questions than answers, and it haunts you long after the final note is played.