A few weeks ago, thinking back on my Year in Reading for the purposes of this post, I realized something I’m kind of ashamed to admit. I don’t think I read any books in 2017. I read a whole lot of magazine articles and short stories. I read for research. I read for work, for classes I taught. I was a screener for the NEA fellowship. And I listened to a whole bunch of audiobooks. But did I actually sit down and read a real (print) book for pleasure? I may have. It’s possible. I just can’t say for sure.

For a variety of reasons—writing and teaching and parenting a toddler and trying to be a good partner in spite of all that—the majority of my pleasure reading in 2017 was via audiobook. I could write a whole post on the pros and cons of listening to literature while running or walking my dog, the different readers, how much I appreciate my local libraries for providing the service, and how 90 percent of the time I still buy print versions of the books I listen to on Overdrive. But that’s not what Year in Reading is all about. So, enough about my habits of literary consumption. What about the books themselves?

Of all the books I read this past year, the one I keep coming back to, the one I can’t shake, the one I recommend to anyone who will listen, is Exit West by Mohsin Hamid. It’s a relatively simple story, set in an unnamed city that could be anywhere in the Middle East or South Asia (but made me think of Aleppo). Boy meets girl, boy and girl hook up, rebels invade the city, girl moves in with boy and his father for complicated reasons, boy and girl decide to leave the city through a mysterious portal, boy and girl try to make a new life in the West amidst growing resentment of refugees like themselves. But the straightforwardness of the plot and the fable-like quality of the narration belie a certain radical empathy at the heart of the book. As Hamid points out in a recent interview with The Nation:

In addition to its many purely aesthetic achievements, Exit West forces us to see (and empathize with) a group of people we might prefer to look away from. And it forces us to see them as individuals, as mothers kissing their children goodnight and young people falling in love. It’s unfortunate that Exit West is so relevant. But given the world we live in—a world with 60 million refugees and internally displaced people; 60 million people, each one of whom was forced to leave his or her home and life behind—it’s hard to think of a more important book for 2017.

A couple of years ago, during a conversation about post-apocalyptic novels, a student of mine suggested that I might like A Canticle for Leibowitz by Walter M. Miller Jr., a 1960s science fiction novel about a group of monks who keep the seeds of science and civilization alive for thousands of years after a devastating nuclear war. I’ll admit, I was a bit skeptical at first. It sounded like one of those high-concept hard sci-fi novels that sacrifice character and prose on the altar of plot. But eventually I got around to the book and I sure am glad I did. It’s a strange and beautiful and deeply humanistic novel that unsettled me for months after I put it down. Think Isaac Asimov’s Foundation meets Umberto Eco’s The Name of the Rose meets Cormac McCarthy’s The Road. If you don’t like “the more speculative genres,” you might have a hard time getting through certain sections. But on the whole, it’s an amazing book, way under-read, and deeply relevant for these pre-apocalyptic times.

In addition to being my year of the audiobook, 2017 was also the year I finished working on my second novel (a polyphonic, multigenerational book centered on a 1,000-year-old synagogue in Cairo). So it’s only right, I think, to give a shout out to two wonderful scholarly works that were my constant companions during the seven years it took me to write the novel. The first is Sacred Trash by Peter Cole and Adina Hoffman, a beautifully written and researched academic history that follows multiple generations of scholars working on an enormous cache of documents found in the attic of the synagogue at the center of my novel. The second is A Mediterranean Society by S.D. Goitein, an eight-volume scholarly behemoth that uses these same documents as its source material. Sifting through thousands of scraps of paper—letters and marriage contracts, business agreements and shopping lists, magic spells and prayer books—Goitein conjures up a meticulously detailed portrait of the vibrant, cosmopolitan society that was medieval Cairo. 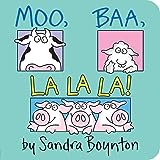 And finally, I would be remiss if I did not mention the author I read most this year: Sandra Boynton. You may know her from Moo, Baa, La La La or Blue Hat, Green Hat. Once you’ve seen her work, you’ll recognize it anywhere. All those cheerful round animals—hippos, cows, sheep, and pigs—dancing and eating and generally being silly. In a year’s worth of bedtimes, I must have read Hippos Go Berserk! and What’s Wrong Little Pookie? 100 times each. And more than once, sitting there with my daughter on my lap, her thumb in her mouth, reading about barnyard animals or bellybuttons or earnest little pigs who forget why they are sad, I thought, this is as good as it gets. If that isn’t enough to recommend a book, I don’t know what is.

Michael David Lukas is the author of the bestselling novel The Oracle of Stamboul, which was a finalist for the California Book Award, the NCIBA Book of the Year Award, and the Harold U. Ribalow Prize, and has been published in 15 languages. His second novel, The Last Watchman of Old Cairo, is forthcoming from Spiegel & Grau in March 2018. He has been a Fulbright Scholar in Turkey, a student at the American University of Cairo, and a night-shift proofreader in Tel Aviv. A graduate of Brown University, he has received fellowships from the National Endowment for the Arts, Bread Loaf Writers’ Conference, and the Santa Maddalena Foundation, and his writing has appeared in The New York Times, The Wall Street Journal, Slate, and VQR. He lives in Oakland, Calif.

Lawrence Hill is the author of the novels Any Known Blood and Some Great Thing. For his most recent novel Someone Knows My Name (now in paperback), he has won the Commonwealth Writers’ Prize and the Rogers Writers’ Trust Fiction Prize. Hill lives in Ontario, Canada. Visit him online at LawrenceHill.com.It’s never easy to do sad and hilarious on the same page, and these days, one of the very best at the game is Canadian novelist Miriam Toews, whose new novel The Flying Troutmans follows the story of a young woman who leaves her own failing life in Paris to take care of her troubled teenaged niece and nephew. Their mom is gravely ill in a psychiatric hospital and the aunt – who has fewer life coping skills than most people half her age – takes the teens on a road trip across America, in an attempt to find their father. Toews portrays the aunt convincingly, but approaches genius in her subtle, nuanced and touching descriptions of two teenaged siblings on the edge of mental and family breakdown. Also highly recommended are two other Canadian novels: The Cellist of Sarajevo, by Steven Galloway, about ordinary people facing extraordinary challenges of survival during the long and murderous siege of Sarajevo in the former Yugoslavia, and Cockroach by Rawi Hage, a gritty, disturbing story about an immigrant living in poverty and emotional distress in modern-day Montreal.More from A Year in Reading 2008