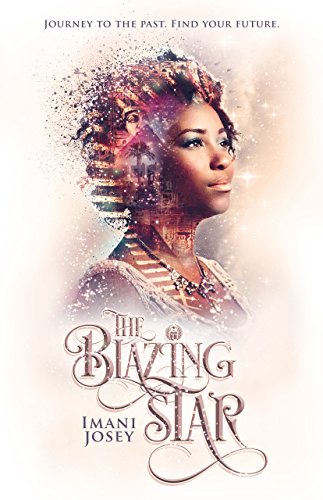 Back in 1996, Imani Josey wrote a 60-page draft of a story she called “The Secret Cave,” about three girls who travel to an alternate universe and discover they are fairie princesses. Josey now cites this the first draft of The Blazing Star, a young adult fantasy novel about three black girls who time-travel to ancient Egypt that she self-published last fall.

For years after that draft, though, Josey didn’t write publicly. She was busy being a student and a beauty queen—she was crowned both Miss Chicago and Miss Black Illinois USA—as well as a dancer. She still wrote, keeping journals, penning stories for her friends, and composing fan fiction that, she says will “never see the light of day.”

She did her writing privately until, around 2011, she felt ready to dive back in. The story on her mind? That same one from 1996, the one that had stuck with her through all the years and would blossom into her debut novel in 2016.

Josey has written before about the importance of black girl magic, and her novel features three black female protagonists, which, in 2017, is still unusual, even while books featuring black girls and women continue to prove themselves in the marketplace (Angie Thomas’s The Hate U Give, for example, has been on The New York Times bestseller list for 21 weeks now). Josey felt passionately that her girls’ stories deserved to be told. “It’s important to tell black girls’ stories with agency because it normalizes blackness,” she says. “These stories ensure we’re not ‘othered.’” She added that her parents surrounded her, in childhood, with images of black girls being normal, through dolls and books with black protagonists.

“These images showed me that I could be a well-rounded, complex person with likes and dislikes and experiences that matter like anyone else’s, and who knew her black skin was beautiful just the way it was,” she said. “It was my parents’ mission to ground my normalcy in my agency, not in my proximity to whiteness.”

So, in her book, Josey gives her girls agency.

The Blazing Star is the first book in a projected trilogy, with each book written from the point of view of one of the main characters. The Falling Star, its sequel, will be released in February 2018.

The book is published by Wise Ink, an self-publishing company. Josey said she originally tried to go the traditional publishing route, but was rejected by countless agents. Nonetheless, she believed in her story, her characters, and her mission, and says her confidence paid off: the book sold out on release day.

“I was hell-bent on my book series doing what traditional pub is dragging its feet to do—fixing the representation gap—a major component of why I went indie,” she said. “I’m not sure how many other black girls are on the cover of YA fantasy book series, and I’m not sure how many lead their own stories as protagonists. But judging by Lee & Low’s annual research, the number is incredibly low.”

In fact, Lee & Low wrote a blog post in March of this year revealing that, while the number of protagonists of color is increasing, the number of authors of color is not: last year, “Black, Latinx, and Native authors combined wrote just 6% of new children’s books published,” the post reports.

Josey gave a bit of advice for white allies who wish to support the work of black creators: make use of their privilege to ensure black writers get their voices heard: “It means being vocal advocates, suggesting marginalized authors for mainstream events, giving their books as gifts and signal boosting crowdfunding projects,” she said, “as well as supporting marginalized traditional and independent authors.”

Josey said she loves that self-publishing allowed her the “freedom to make [the book] exactly how I wanted,” but adds that the self-publishing road is hard. She said it’s been a struggle, especially when it comes to marketing and large-scale distribution.

But she considers herself a fighter, a tough person, traits she partially attributes to her pageant history. “Pageants made me tougher,” she said. “[They] taught me about scrutiny and rejection…They taught me about marketing. They taught me about chasing big dreams, even when you don’t know if everything will turn out alright.”

Karis Rogerson is an American/Canadian who was raised in Italy and schooled in Germany and Kentucky before moving to New York City to pursue writing. She has since embraced the cliched nature of her life as a Brooklyn barista working on her novel. She writes about relationships, mental health, and books for various sites, and you can find her writing on her website, karisrogerson.com, and follow her on Twitter.

Darby didn’t read 75 books in 2006, but his blog post about them shouldn’t be missed.

…is what I will again be forced to do this year, my darling, barring some eleventh-hour issuing of press credentials or a sudden reduction in ticket prices.For a while now, you – the greatest magazine in the history of American magazines – have tantalized me annually with your Festival’s smorgasbord of literary talent. And yet, as much as the word-hungry reader in me would love to see, e.g., Lorrie Moore in conversation with Jeffrey Eugenides, the starving artist in me rebels.To be frank, your $25 cover charges cheapen you, New Yorker. After all, in this city which not to look upon would be like death, any given night already offers the discerning gentleman a bevy of comely talent reading for no charge. A nd then, several times per year, events like the PEN World Voices festival present stimulating citywide literary programming for free or at a nominal price.Indeed, with the notable exception of events like your dance party or your gastronomic tour with Calvin Trillin, your Festival strikes this correspondent as a way of charging the public for a publicity junket. And, at current ticket prices, the Festival highlights your worst feature, dearest: your habit of reaffirming the upper class’s satisfaction with its own refined sensibility and unimpeachable taste. I mean, who else can afford to get in the door?New Yorker, don’t you know you’re at your best when you’re challenging the status quo from your perch within it? Wouldn’t it be subversive to take Conde Nast’s money and put on these readings for free, so that any old philistine could attend? I love you, New Yorker, more than you’ll probably ever know, but I can’t support your Festival. I can’t afford to. Why would I buy your cow when I can enjoy your milk for the low, low price of $52 per year?

There’s an article in the New York Times today about a Princeton undergrad who used statistical analysis to illuminate the biases of New Yorker fiction editors. Katherine L. Milkman read 442 stories printed in The New Yorker from Oct. 5, 1992, to Sept. 17, 2001, and “one main conclusion was that male editors generally publish male authors who write about male characters who are supported by female characters.” The 9/11 Commission will release its findings to the public in book form. It’s available for preorder at Amazon. And now hitting shelves, the paperback edition of Edward P. Jones’ Pulitzer-winning novel, The Known World. I highly recommend this book.

In its never-ending roll-out of new features and incremental redesigns, Amazon has introduced “Author Stores,” which Amazon calls “new corners of our bookstore dedicated to offering customers a new way to browse and shop favorite authors, discover new books, and more.”Basically, Amazon has created dedicated pages for several hundred authors. It’s a nice little navigational upgrade since it is sometimes difficult to get a sense of an author’s oeuvre using Amazon’s search, though for Author Stores to be a truly useful navigational tool, Amazon would need to create them for many thousands more writers.The Stores themselves are moderately interesting. At their most bare bones, Sherman Alexie’s, for example, the Stores offer just a list of the books the author has written. Stephen King’s, on the other hand, offers more substantial diversions including a video of the author himself. It will be interesting to see how much Amazon expands these stores and whether the features Amazon promises to add “in the months to come” will be genuinely unique or just more repackaging of content.Meanwhile, LibraryThing’s author pages are far cooler, with lots of meta-data and interesting tidbits supplied by LibraryThing’s active community. By way of comparison, here is David Mitchell on LibraryThing and on Amazon.

Miss Snark is the blogging pseudonym of a New York agent who has made herself available to all the aspiring writers out there who are befuddled and bewildered by the publishing process. When particularly perplexed, these writers turn to Miss Snark with their questions – despite the better than fair chance of being called a nitwit by Her Snarkiness. Aided only by her faithful poodle Killer Yapp (KY), Miss Snark has come to the rescue of hundreds of writers in the months she’s been online answering questions on protocol, procedure and not looking like a fool when trying to turn your manuscript into a published masterpiece. Her advice is refreshingly frank and entirely devoid of BS, and she has a loyal following. Why does she devote so much time to such a thankless endeavor? I can only assume she’s trying to make the world a better place (but then again she may be banking on the many pails full of gin she’s now owed by the many writers she has helped.)I had been under the assumption that all aspiring writers were avid readers of Miss Snark, but it has recently come to my attention that this is not the case. So, if you hope to have your book published one day, and you aren’t yet reading Miss Snark, I suggest you start now. And this is doubly true if you are agentless and looking. These conditions are not, however, prerequisites. I have no plans to write a book anytime soon, and I can’t help but read Miss Snark, if only for the fearful laughs she elicits.