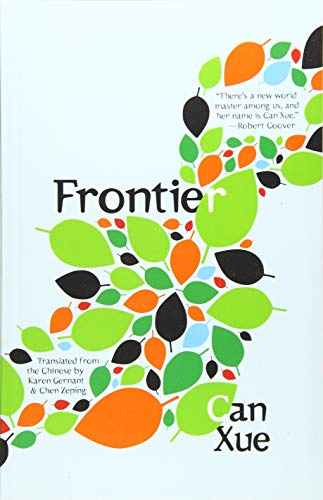 If in The Last Lover, Can Xue’s Best Translated Book Award-winning novel from 2014, characters seem to be wandering in and out of each other’s dreams, in Frontier, the author’s latest work to be published in English, experience has almost become detached from bodies entirely. It floats as if through the air of Pebble Town, a settlement of uncertain size on an unspecified, but presumably northern, Chinese border, attaching itself by turns to the town’s various human and animal inhabitants. Several unrelated characters share a memory of “standing on the ocean floor,” while others recognize their fathers or lovers in the form of geckoes and wagtails; mysterious shadows in one woman’s house are said to belong both to “invisible people” and to wolves. Just as the human effortlessly fades into the non-human, so do the boundaries between inner and outer life, between life and death themselves, lose their solidness. When one character is shocked by the beauty of a woman’s red skirt among a herd of sheep uttering “sorrowful cries,” Can Xue writes, “It was wondrous,” and indeed, all of Frontier is.

One of the best-known experimental writers in China, Can Xue (the pseudonym of Deng Xiaohua) has found increasing success in the West for her strange but luminous work. Frontier, originally written in 2008 and now published in Karen Gernant and Chen Zeping’s translation, is perhaps the best and most beautiful of her novels yet to reach English readers. Plot never dominates Can Xue’s work; rather, her novels build upon images and affects that repeat, vary, and recombine, giving rise to patterns at once original and tinglingly familiar. While readers approaching Frontier as a cipher to be decoded are therefore likely to grow frustrated, those who allow themselves to be immersed in it as in music or painting will begin to perceive the novel’s complex harmonies. Something of Frontier’s lush and perilous landscape may resonate particularly with American readers, who will sense in it a counterpart to their own mythology of a sublime internal frontier.

“Where there is desire,” Can Xue wrote in The Last Lover, “there is a wilderness.” Frontier develops the equivalence even further, until Pebble Town’s magical terrain is just as much the manifestation of its inhabitants’ desires as it is the backdrop for them. Whether it is the vastness of the Gobi Desert (which Pebble Town is said to border) or the floating garden that sometimes appears miraculously in midair, the landscape of the frontier, as one character observes, exerts “tremendous pressure on people.” A man named Lee, who, gazing at the “scenery outside,” feels his heart, “long covered with dust, bubble over with joy,” has the following conversation with his wife:

“Nothing you see here is actually what it appears to be.”
Grace raised her left eyebrow, as if thinking of something.
“Do you think this is like our ailments?” she asked him.
“Do you mean the thing inside us and the thing outside us are the same thing?” Lee was perplexed.
“Lee, Lee, we’ve finally broken out!”

The ecstasy at this apparent unity of interior and exterior life implies that a threshold far beyond the geographical has been crossed. Pebble Town is repeatedly described as a utopia, but it may also be something like a utopian purgatory. Hardly anyone does much of anything—most of the town’s residents are employed by the enigmatic Design Institute, though no one ever works—yet they are all caught up in barely-articulable processes of metamorphosis, as if straining to break into another type of existence of which Pebble Town is the premonition. Moreover, some of them have a whiff of death about them: one man is told outright that he smells “a little” like a “dead person,” and another, plagued by dreams of being chased, blurts out, “The dead are struggling for territory against the living people.” The Design Institute itself is said to look like “a giant grave,” and its director’s adopted relative Ying, who wanders the grounds of the Institute like a “timekeeper,” recalls a god of death, counting down everyone’s seconds.

For all its supernatural suggestions, however, Pebble Town also belongs undeniably to contemporary China. There are allusions to a surveillance state (“Everyone’s movements are tracked!”) and an ominous reference to “execution reform.” A young man named Marco, whose identity is one of the least stable in the book (“in a split second he became a different person”), was adopted by a Dutch family as a child and later sent back. He longs to return to Holland (which Pebble Town also supposedly borders), and undertakes a dangerous journey across a river and through a desert attempting to reach his idealized Western past. Liujin, a woman characterized as a true “daughter of the frontier,” was born in Pebble Town because her parents fled “Smoke City” for the “clean” borderlands, “where no air pollution existed;” Liujin and her father, listening “to birds singing outside the window,” in or near the Gobi Desert, feel they are in a “utopia.” While Frontier is much more than a wistful social fantasy, this sense of injustice—surveillance and oppression, exploitative adoption practices, the destruction of the natural world—courses beneath the book’s brilliant landscapes like the mysterious waters said to flow under Pebble Town itself.

There are books that seem to expand ever outward, so that upon finishing them, readers see the world anew through the author’s eyes. Others expand inward, leaving behind a glow to be carried for days like a secret. Frontier’s “bright, shining,” shapeshifting town, “a paradise for vagrants,” lovers, and wolves, offers, like poetry, what Can Xue says each of her characters already possesses: “a pattern of freedom.”

Madeleine LaRue is associate editor and director of publicity for Music & Literature. She lives in Berlin.