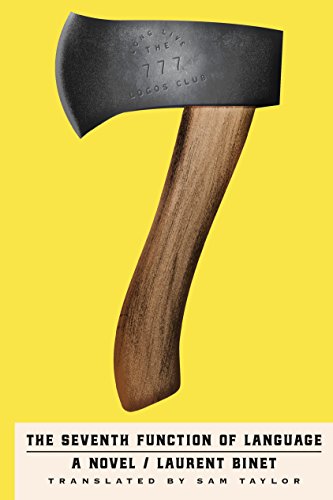 Detective fiction and theory have a surprising history, one that I sometimes use to rationalize my childhood love of Nancy Drew and the Hardy Boys. And I’m not alone: T.S. Eliot, Vladimir Nabokov, and G.K. Chesterton were obsessed with popular mysteries. We like whodunits, Bertolt Brecht thought, because our lives are filled with structural problems and social contradictions that aren’t caused by single agents. Crime-solving sleuths, people like Sherlock Holmes and Nancy Drew, help us put back into place a system that no longer functions: it’s only in detective fiction that we start with a bunch of evidence, follow it rationally to a conclusion, and, in the end, apprehend a villain. Reading detectives, the thinking goes, helps us do what we can’t normally: piece together fragments, forming something coherent out of the madness.

Or at least, traditionally. Enter, then, Laurent Binet’s newest novel, The 7th Function of Language, a madcap sharply irreverent French theory mash-up that’s part mystery and part satire, by the Prix Goncourt winning author of HHhH. The new book turns Roland Barthes’s accidental death in 1980 into a murder investigation set against French intellectual life. With a cast of characters that includes Michel Foucault, Jacques Derrida, and Julia Kristeva with guest appearances by Gayatri Chakravorty Spivak, Umberto Eco, and John Searle, it’s no surprise Binet’s book is way more dizzying than most detective stories. What is shocking, though, is how it manages to respect the theories and mock the theorists all at once.

The question that prompts the book is simple: who killed Roland Barthes and why? On the case is Bayard, a grumpy inspector who’s more than a bit impatient with the posturing of French intellectuals (who can blame him?). Simon Herzog, his sidekick, shares more than initials with Sherlock Holmes; he’s a young semiology instructor brought on to help decode and interpret the case’s signs. Together, they navigate a blindingly bizarre and often raucous set of worlds: picture a chase scene through a gay sauna with Foucault, Bulgarian secret agents with possible ties to Kristeva, drug-riddled parties after the infamous Derrida-Searle debate, and even a Logos Club competition, which is the kind of intellectual fight club that Plato wishes he would have invented.

What the troublesome twosome learn along the way is that Barthes, just before he died, was working on the so-called (fictional) seventh function of language: the ability—first introduced by linguist Roman Jakobson—of language to persuade, convince, and seduce. In the novel, French intellectuals and politicians like socialist president François Mitterrand and his one-time opponent Valéry Giscard d’Estaing are all after the function for themselves.

But all of this —deciphering the mysteries of the seventh function and figuring out who killed Barthes—isn’t why you keep reading. Sure, mystery propels the book forward, though we’re certainly not going to get the clean resolutions Brecht thinks we want: The Seventh Function revels in a world where randomness and madness reign.

What really drives the book is Binet’s irreverence—Philippe Sollers is a loudmouth dandy, Foucault masturbates to a Mick Jagger poster, Umberto Eco gets urinated on by a stranger in a Bologna bar. All of this might lead you to think of Binet as a writer of long-form libel. But Binet’s cheek is grounded in a serious familiarity with and respect for the theories, if not the personalities, he uses to populate his book (a lot of the anecdotes are non-fictional, and he provides in-depth treatment of the philosophies at hand.) I bookmarked a page with titles of talks from a Cornell conference;  Searle’s giving one called “Fake or feint: performing the F words in fictional works,” while Spivak lectures on “Should the subaltern sometimes shut up?”

For all its lightness and raucous humor, The 7th Function can sometimes feel a little heavy handed, especially when it comes to the blurring of fiction and nonfiction.“ Life is not a novel,” the book begins, and a few hundred pages later after I’d started to ignore the self-aware interruptions of the narrator, the semiologist-sidekick Simon Herzog himself starts suspecting he’s in a novel, one by “an author unafraid of tackling cliches.” Maybe Herzog’s paranoia and distrust are the result of reading too much philosophy. I couldn’t help but feel, though, that the narrator was wearing brass knuckles spelling out “postmodern” and trying, repeatedly, to punch me in the face.

In spite of this, what’s most shocking is that Binet’s novel works, although perhaps more to draw attention to our mad, mad world than to help reconcile us to it as Brecht hoped—for that, we might need more than the fictional seventh function of language.

Shivani Radhakrishnan is a PhD student in philosophy at Columbia. Her writing has appeared in the Paris Review Daily, the Boston Review, and n+1.

Reviews
Whenever a character makes light of the horror, you know something awful is afoot.
Reviews
Mark Cecil | 2 books mentioned 3 min read
● ● ●
Reviews

The short story was but one of many writing genres embraced by author Paul Bowles, known also for his novels, travel essays and poems. The influential American writer drew the admiration of other literary giants such as Tobias Wolff and Norman Mailer, who said Bowles “let in the murder, the drugs, the incest, the death of the Square… the call of the orgy, the end of civilization.” That aptly describes the content of the dozen short stories found in Too Far From Home: Selected Writings of Paul Bowles. The selected stories were written over a span of approximately 25 years, beginning in 1950.As an expatriate who lived for many years in Tangier, Bowles’s writing not only demonstrates a keen understanding of the Western traveler (“A Distant Episode”), it also shows how he comprehended the varied inhabitants of Morocco (“The Delicate Prey”) more than any other American or European writer of his time. From the dunes of the Sahara desert to the peaks of the Atlas Mountains, Bowles effortlessly enters the minds of a people living in the French Protectorate (1912-1956).Bowles masters a range of narrative techniques in a variety of settings. While he’s perhaps best known for The Sheltering Sky – a novel adapted for the screen, starring John Malkovich and Debra Winger – Bowles is also at ease with stories set in the Caribbean (“Pages from Cold Point”) and elsewhere. In one story (“The Circular Valley”) he even adopts a type of meta-narrative by giving voice to a spirit that moves in and out of the consciousness of birds, fish, humans and reptiles to experience emotions in different forms of life.Bowles’s short stories are indeed very brief. The longest in this collection is 28 pages (“The Time of Friendship”), and most are less than half that. The brevity is a testament to his word economy. Characters are developed quickly and fully in the opening pages, and in each tale the protagonist is faced with nothing short of a profound, life-altering event – emotional, physical or both. When necessary, Bowles does not shy away from the harsh realities of life outside “civilization.”The man moved and surveyed the young body lying on the stones. He ran his finger along the razor’s blade; a pleasant excitement took possession of him. He stepped over, looked down, and saw the sex that sprouted from the base of the belly. Not entirely conscious of what he was doing, he took it in one hand and brought his other arm down with the motion of a reaper wielding a sickle. It was swiftly severed. A round, dark hole was left, flush with the skin; he stared for a moment, blankly. Driss was screaming. The muscles all over his body stood out, moved.Some readers may find it frustrating how Bowles often uses foreign words – Arabic, French and Spanish – when the English translation is insufficient. But not only are such occurrences sporadic, they also lend a certain authenticity to conversations between a melange of characters.

Reviews
Reviews
His prose feels most alive when he’s pursuing those images and plot twists tied to the minutia of his created world, even if their thematic importance to the story at hand remains cloudy. What does it mean to rewrite the Bible in slang? And how does that redress the sting of police profiling? An answer is there, perhaps, though it has yet to find its fullest articulation.
Reviews
Michael Deagler | 2 books mentioned 4 min read
● ● ●
Reviews

In the summer of 2006, on a small stage in downtown Toronto, the Emperor Napoleon was facing off in a game of chess against the “Mechanical Turk.” It was 1809, continental Europe, and Malzel, who recently purchased the legendary chess-playing automaton, was transporting this curious contraption from town to town to square off against the dubious and the delighted.The automaton was an historical oddity – a contraption consisting of a carefully-constructed cabinet, out of which emerged the fabricated, human-like, upper-half of an exotically decked-out Ottoman chess master. It was a hoax, of course, the cabinet being designed in such a manner as to conceal an actual human – small in stature, but large in chess-playing talent. Magnets, a pantograph, and an elaborate, clockwork-like mechanism enabled the Turk’s hands and arms to grip and move chess pieces, eyes to roll, head to nod.The play, “Napoleon vs The Turk,” written by Tom Robertson and staged by Luke Davies as part of the 2006 Toronto Fringe Festival, was my introduction to this famous hoax.Robert Lohr’s engrossing debut novel, The Chess Machine, goes back a bit further, to 1770 and the workshop of the Turk’s actual inventor: Wolfgang von Kempelen, a Baron with connections in the court of Vienna. A work of historical fiction, The Chess Machine also introduces us to Jakob, a fictional character who Lohr imagines as Kempelen’s valuable assistant and cabinet-maker.Above all, though, The Chess Machine tells the fictional tale of Tibor, an Italian chess-playing dwarf, recruited by Kempelen to be part of the grand deception, to spend countless stifling hours inside the automaton, monitoring the opponents’ moves, and responding accordingly.In one wonderfully gripping episode, the dwarf, concealed in the automaton for an outdoor match and deprived of the candle that normally helps him see what he’s doing, is forced to move his chessmen simply by anticipating his opponent’s moves, by the sound and feel of the game being played above his head.Tibor is the heart and soul of the automaton, and also the story. Rescued from a Venetian prison by Kempelen, who knew of his talents and was searching for the missing piece to his scheme, Tibor reluctantly agrees to go with Kempelen back to his workshop is Pressburg (now Bratislava). He must remain hidden from public view, on occasion venturing out incognito with Jakob for a late-night prowl around town. The tale is a captivating one, full of dreams, schemes and spies, deception and murder, lusty, clandestine encounters with women of various levels of repute, a jealous inventor, an affronted nobleman, and at least one seriously insane sculptor.A glance, too, at audiences of the day, and their willingness to suspend disbelief. As Tibor inquires of his master: “Are they going to believe in this?” To which Kempelen responds “The world wants to be deceived. They’ll believe in it because they’ll want to believe in it.”