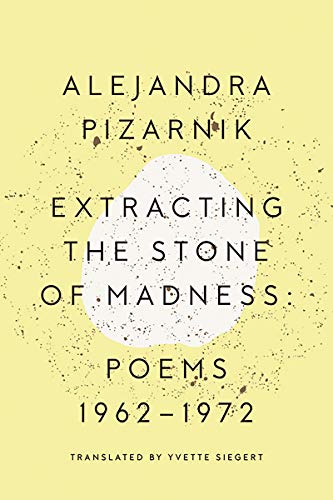 “I speak the way I speak inside,” wrote the great Argentine poet Alejandra Pizarnik. “Not with the voice intent on sounding human, but with the other one, the one that insists I’m still a creature of the forest.” Pizarnik, whose ubiquity in 20th-century Latin-American literature is indicated by the fact that many critics refer to her simply as “Alejandra” or “A.P.,” has not, historically, been on a first-name basis with English-reading audiences; that may change following the publication of Extracting the Stone of Madness: Poems 1962-1972, an invaluable 2016 release from New Directions that compiles new translations of three full-length collections and numerous uncollected poems Pizarnik left behind. This volume charts the final decade of the poet’s life, a period of her career in which she turned her gaze away from the world, facing inward to focus on the dark voices she channeled. On the page she carves out spaces of solitude and silence in which language is reduced to its very essence, a limited collection of recurring images and symbols. “When the roof tiles blow away from the house of language, and words no longer keep—that is when I speak,” Pizarnik resolved. Drawing from the dream-languages and word games of the surrealists, Pizarnik turns notions of lyrical subjectivity inside out with her kaleidoscopic procession of masks and personae; the strange music of her poems invites the reader in, and her revelations — cathartic and unsettling — are very nearly overwhelming.

Pizarnik’s friend Alberto Manguel described her small apartment as having “a small blackboard on which she worked out her poems, like a sculptor chipping away at a block that, she knows, contains a few essential, precious words.” The poems in the atmospheric Works and Nights (1965) bear out this effort with severely compressed forms, only a few stretching longer than eight brief lines. True to the collection’s title, these poems speak of the feverish, sleep-starved spaces of the night:

Someone, sobbing, measures
the lengths before dawn.
Someone punches her pillow
in search of an impossible
place of rest.

Masterfully evocative portraits in miniature, these poems summon the pregnant stillness of late evening, as well as an alluring darkness. Loneliness permeates these dark visions, but there are moments of sensual languor in this void: “Space. Blazing silence,” the poet intones, then breaks the line, a move that may evoke a lowered voice, a downward flick of the eyes: “What is it that shadows give each other?”

By 1965 Pizarnik had already established many of the recurring symbols and images most frequently associated with her writing, many seemingly drawn from a world of dark fairy tales. Her shipwrecked girls, beggars, and orphans lend a haunting quality to the work, as in “Dispatches”:

The wind had eaten away
parts of my face and my hands.
They called me ragged angel.
I lay waiting.

Much has been made of Pizarnik’s reliance on this particular set of tropes — which, in a decade-spanning volume like this one, occasionally risks feeling a bit repetitive. Most critics connect Pizarnik’s unique language of symbols with a fascination with dreams and esoteric symbols drawn from her reading of surrealists like André Breton and Antonin Artaud. Pizarnik builds on these images in 1968’s Extracting the Stone of Madness (from which the omnibus derives its name), incorporating the visions of “tragic ladies in red” into more ambitious and expansive poems and prose works, some spanning multiple pages. She also toys with subjectivity, confiding, “I am alone and I write,” then correcting herself: “No, I am not alone. There is someone here who is trembling.” Just who this trembling other might be remains ambiguous; Pizarnik, in her diaries, diagnosed herself with manic depression, and spoke of her “fear of all the selves struggling inside me,” but the power of these lines invites us into a more complicated (and disorienting) relationship with this work and its creator: invited in by Pizarnik’s hazy confessions, the reader begins to suspect that perhaps this someone is us.

Despite the presence of a few ladies in red, the poems in Extracting the Stone of Madness frequently dispense with the elaborate metaphors of Pizarnik’s early work in favor of a heightened sense of urgent candor, voices that speak frankly (if opaquely) of various sorts of deep alienation. It is as though the defamiliarizing exercises of the surrealists have been pushed to a further extreme, losing any sense of playfulness or winking absurdity. “If I’d had it close at hand, I would’ve traded in my soul to be invisible,” Pizarnik admits here, landing on a central theme. “Drunk on poems and on (why not just say it) the void of absence.”

The terror and the allure of invisibility and silence—in short, the will to disappear—remain focal points in A Musical Hell (1971), wherein Pizarnik presents words themselves as a means of concealment or defense, announcing:

The precise nature of this fear remains elusive. In an interview near the end of her life, Pizarnik ascribed an almost superstitious quality to her writing process: “Among other things, I write so that what I fear won’t befall me…To write a poem is to repair the fundamental wound, the break.” In Pizarnik’s work, this break exists between reality and the language we use to describe it, inhibiting, by extension, the ways we connect with the people around us. To repair this break, however, called the poet to plumb the darkest depths of her visions, parsing an existential dread no language could convey. “I can’t just speak and say nothing,” Pizarnik insists. “That’s how we lose ourselves, the poem and I, in the hopeless attempt to write the things that burn.” And where does her exploration lead her, once she admits the hopelessness of her endeavor? “To blackness, to the sterile and the fragmented,” she concludes. It is difficult to read Pizarnik’s work without shuddering at what can only be described as profound depression. The poet’s full-length collections, here, are followed by an assortment of uncollected work, including poems written in the days leading up to her suicide, and if some lines manifest a crippling existential paralysis, others presage an irrevocable departure. “The poem takes me to the limits,” she writes, “far from the houses of the living. And where will I wander when I leave and don’t come back?”

Only in recent years have large parts of the Pizarnik oeuvre been accessible in English: besides the New Directions volume, readers can also enjoy the poet’s seminal 1962 collection Diana’s Tree, and can look forward, in 2017, to her 1955 debut, The Most Foreign Country — these last two chapbooks put out by Ugly Duckling Presse, all three in crisply evocative translations by Yvette Siegert. Despite Siegert’s efforts, a clear understanding of the liminal spaces Pizarnik wanders is not, ultimately, what we are left with. This is, after all, a language of dreams, of the hinterlands of the mind; many poems grip us with the insistent logic of nightmares, so convincing in the moment of reading, so hard to explain afterward. Like the work of Artaud and Pizarnik’s other spiritual forebears, Extracting the Stone of Madness is perhaps more strongly felt than understood, best experienced when read aloud, which is not to say that these texts aren’t utterly successful in their dark invitations. “I want to go / nowhere if not / down into the depths,” Pizarnik wrote near the end of her life, and went. The reader who lets her guard down may feel dangerously inclined to follow.

Matthew Phipps reads fiction for Electric Literature and lives in Brooklyn. His reviews and interviews have appeared in Broad Street and Blackbird.

Essays
Writers wrestle in their stories with the myth of Greekness, working out an answer on the queer bodies of characters who identify as Greek differently from how they are supposed to.
Essays
Niko Maragos | 3 books mentioned 1 9 min read
● ● ●
Essays

Haruki Murakami’s new novel 1Q84 has come out swinging. With an initial, combined print run of 680,000 copies, publisher Shinchosha believes the two volume book is on track to sell a million and “become a social phenomenon.” Released two days early (May 27th) in Tokyo and the Kansai region, the book has already sold over 100,000 copies, and the Yomiuri Shimbun reports it has set a new sales record for Amazon Japan.What’s the book about? Murakami’s publisher Shinchosha’s website compares it to Orwell’s masterpiece Nineteen Eighty-Four, stating “Where Orwell published a novel about the future, Murakami approaches the year from the opposite direction, creating an alternate past.” Apparently, that’s where the similarities end, however. The book follows the stories of two characters, one a writer and the other a young PE instructor who become involved with a mysterious cult. As the story unfolds, they create an alternate universe, “a mysterious past, different than the one we know,” which the author character refers to as 1Q84. So what about that mysterious Q? It stands for the English word “question mark.” Apparently the explanation comes on page 202: “1Q84 – that’s what I’ll call this new world. Q is the Q from ‘question mark.’ That which creates a question” (translation by Daniel Morales at howtojaponese.com, who is reporting on both his reading experience and his excellent taste in beer). As in, what the hell is this book about?Early reviews (i.e. Amazon.co.jp) have been mixed, with some rhapsodizing over its “dream-like” qualities and others deriding it as “standard” Murakami fare. A few reviewers, however, have decided to hold their judgment until (drum roll) the rest of the book is released. They theorize that we can expect at least one and maybe even two more volumes. Their speculation is backed up by a number of compelling clues:1. Murakami is said to have referred to this as his longest novel, yet at its current length, it is 127 pages shorter than the Japanese version of the Wind-Up Bird Chronicle’s astounding 1,182 pages (which makes you realize how much must have been cut in the US translation.)2. Apparently the second volume ends on a pseudo-cliffhanger.3. The book’s two volumes are labeled “One” and “Two,” contrary to the Japanese convention of referring to the first volume of a two volume set as “up” and the second “down.” This follows the same pattern as the Wind-Up Bird Chronicle, which was released in three volumes in Japan.Of course, this may just be wishful thinking. There has been no official confirmation of further volumes. We’ll let you know if anything interesting turns up.See also: Murakami’s 1Q84 is a Heavyweight, Murakami Fans Rejoice: Counting Down to 1Q84

Essays
Essays
For all my writing, I am performing painful self-reflection and I would be grateful if my readers would do the same after reading my work.
Essays
Jianan Qian | 3 books mentioned 11 min read
● ● ●
Essays
● ●
Essays
The unforgivable sin of bookstores is this: so many of the books that they offer are physical reminders of passing time.
Essays
Bryan VanDyke | 3 books mentioned 3 6 min read
● ● ●