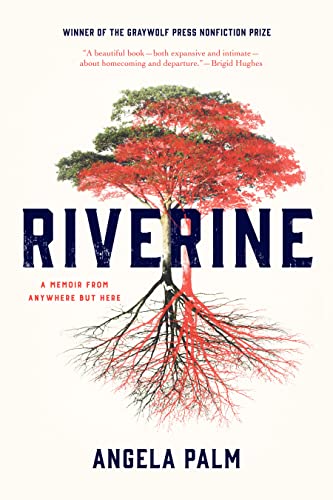 In Riverine: A Memoir from Anywhere but Here, Palm’s memoir about her upbringing in rustic Indiana and her subsequent post-rural life, she deploys a veritable gallery of lyrical comparisons, probing every possible detail for some sort of larger significance. Here, for example, is the author reflecting on the destiny of a childhood friend:

Bifurcation comes to mind when I think of Corey. As in the division of the common carotid artery. As in the shape made by the branching of the Kankakee River and the Illinois River. As in me going one way and Corey going another. As in the way people lose themselves, splitting further and further from their origins. As in the roots of hosta shoots, separated by mutation or by force.

At work in this passage and in the book as a whole is a mind that can’t help but see everything as somehow connected, as intrinsically meaningful. And isn’t this, after all, what all writers — all humans — do? Is that not how we come to understand the unknown, grasping the unfathomable by comparison with what is familiar to us? If Riverine is, in this sense, mining the territory familiar to any coming-of-age narrative, then it stands out both by the relentlessness with which the comparative mind of the author works and by her willingness to question her own metaphor-making tendency.

From the start, Palm draws on a rich, imaginative vein to not only give a sense of the place in which she grew up, but of the ways that her childhood self viewed that place. She recalls staring at a map when she was a girl and seeing two pink dots representing the town in which she technically lived and the town whose name, by a quirk of the postal system, appeared on her mailing address. Obsessed by the yellow space on the map in between the two dots, the young Angela has her mom drive her out to the no-man’s land, only to find it is the familiar territory of her everyday life — that they have barely moved any distance from their house. From this, Palm conceives of herself as living in the “fringes”, not only not belonging to either town, but neither fully connected to nor fully distanced from the geography of her childhood. “Filled with this new view,” she writes, “I knew that I was neither sort, but instead some half-breed spawn of both worlds and alien to both.”

Where Palm lives in the first section of the book, comprising the earliest years of her life, is on the banks of the Kankakee River, in the middle of a floodplain. Vividly evoking this liminal space, subject to perennial overflow from the river and isolated from her more prosperous classmates who live properly in town, Palm suggests that geography may well be destiny. Like the Kankakee River returning to its plan from its pre-19th-century rerouting, only to flood Palm’s childhood home, the inhabitants of the author’s neighborhood seem unable to escape the circumstances of their land’s harsh geography. Generally poor and socially immobile, the community is fixed in its position both by the unfavorable land and the economic circumstances that keep it tied to that land.

Among those neighbors of the young Angela is Corey, a boy three years older than she who lives next door. Childhood playmates, the two skirt a romantic and sexual involvement as they grow into their teenage years, one that never quite manifests but remains as a tantalizing what-if. This what-if becomes the stuff of pained contemplation for Palm when Corey is sentenced to life in prison for killing an elderly couple. But as Palm is quick to point out, Corey was not wholly to blame for the murders, his path having been set by a life of poverty and a series of petty crimes for which his lowly social status had not allowed him to escape harsh justice. “If Corey hadn’t spent four of his formative years in juvenile detention centers for crimes that rich kids had been let off for,” Palm wonders, “would it have gone this far?”

How much of a person’s course in life is determined by their geography, by the circumstances of his or her upbringing, and how much is that person in charge of shaping his or her own destiny? This is where the stakes of Palm’s metaphor-making take on a more serious import. If we understand everything as metaphor, if everything can be slotted into a pre-ordained meaning, then we are left with very little freedom as individuals, entrusted with almost no responsibility for our actions. As such, Palm continually struggles against her natural comparative tendency and, in so doing, provides much of the tension of the book’s later sections. Talking about an old boyfriend, for example, she writes, “Greg worked as an excavator, rearranging the terrain. I liked his job as a metaphor” before quickly acknowledging that metaphor isn’t enough to sustain their relationship and that they were always completely incompatible.

The dangers of seeing everything as metaphor, of adhering to strict notions of geography, become much greater when Palm finally gets around to considering her own path in contrast with that of Corey. Although they grew up in the same environment, subject to the same flood patterns of the Kankakee, their lives took on very different trajectories. Palm moved to Vermont, married, had kids, and became a writer while Corey remained confined to an Indiana prison. While both these new environments had their effects on the two childhood friends, Angela’s semi-rural Vermont home opening up her world as Corey’s prison home constricted his, Palm ultimately recognizes that a person’s life is not simply a product of his or her environment, not understandable by simple recourse to metaphors of rivers and flat plains, but something autonomous and unpredictable.

“In some ways, he was made by where we were from and who he was from,” Palm concludes after visiting Corey in jail. “But he had also made bad choices. And by his word, he’d never valued his own future enough to make better ones.” But then after coming to this conclusion, she tracks backward, introducing yet another metaphor, one that seems to retip the balance toward environmental determinism: “People, especially young ones, are malleable. Like wet sediment. Guided by whatever kind of banks have lined their river, by what has held them.” Endlessly searching for ways to understand the world around her, Palm by turns reaches for and rejects her surest tool for bringing clarification to her life. By struggling against her own tendencies to impose arbitrary meaning while still searching for and locating that meaning, she does the hard work of essaying. As such Riverine stands as a bold reckoning with not only an individual’s past and present but with the very apparatus of truth-making itself.

Andrew Schenker is a New York-based writer whose work has appeared in The Village Voice, Artforum, Los Angles Review of Books, and Blunderbuss Magazine among many others. He is currently an MFA candidate at Bennington College.

So, I’m back again after a week in New York. We move to Chicago in three weeks, and after a summer living out of suitcases, an apartment all our own will be a relief. Over the past few weeks I’ve read four books. I read them on the beach, in cafes, in cars, subways, and airplanes, and in halflit, air-conditioned rooms over the course of long, languid afternoons. This has been some serious summer reading. I plan to get to all of them this week, beginning today with the modern classic and winner of the National Book Award in 1962, The Moviegoer by Walker Percy. I had never heard of this book before I started working at the book store, and it seems to be one of those books that is half-remembered and dimly loved by those who read it decades ago. The moviegoer is Binx Bolling, a successful businessman and a member of a prominent and eccentric New Orleans family. He is unmarried and enjoys the escape that going to the movies provides. He is unable to keep himself from dating his secretaries, and he is constantly trying to hold “despair” at bay. It is an existential novel of the American suburbs where Binx tries to find meaning or hope in the midst of mundanity. But it isn’t preachy or didactic, it meanders and searches, and one begins to wonder if Binx is a madman and not just a lonely bachelor. In this sense it has a lot more depth than some other books of middle-aged male suburban angst that I’ve read over the years, The Sportswriter and Independence Day by Richard Ford and Wheat That Springeth Green by J.F. Powers to name a few, and Binx seems far more ethereal than Frank Bascombe or Joe Hackett. It’s short and cleverly written, and I recommend the book to anyone with a taste for the internal monologues of a Southern thinker.I added Adam Langer’s much-praised debut, Crossing California to the reading queue, and I’m about to start reading part one of Peter Guralnick’s two-part biography of Elvis Presley, Last Train to Memphis. More soon!