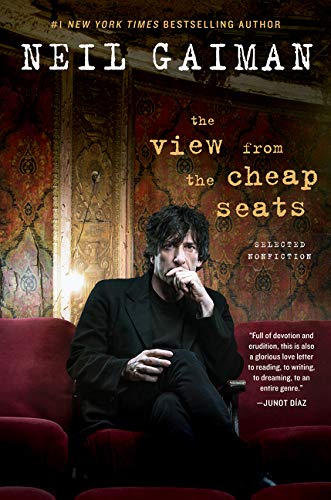 Over the course of eight novels, four short story collections, and a series of graphic novels, Neil Gaiman’s greatest work of invention has been himself. The author has 2.42 million Twitter followers, with whom he shares everything from exhortations about human rights to bored airport musings. His messy-haired, leather-jacketed figure appears at Amanda Palmer concerts, on Guardian comment pages, and even at the 2010 Oscars. He is ubiquitous enough to transcend the genre section of bookstores and accessible enough to retweet fans’ Kickstarter pages. Inviting his fans into his life like this takes the mystique out of writing and creates a sense of community, similar to the fandom of John Green. But fans want more: we want to be confided in — we want to make it real.

Gaiman has made himself familiar and friendly without forging any real intimacy. One advantage of writing in the genres that Gaiman does is that no one ever expects the work to be autobiographical. The 50-something Englishman has never jumped a magical wall in pursuit of a fallen star or come home to find parents with buttons for eyes. Throughout his fiction, only small biographical details have snuck in: the tiny lakeside town that Shadow moves to in American Gods is reminiscent of Gaiman’s Wisconsin home, and the quiet boy who lives vicariously through the books he reads in The Ocean at the End of the Lane is Gaiman as a child — he’s said so himself. Gaiman controls the narrative, not just of his characters, but of himself, limiting revelations about the latter to the mundanities of daily life and charming childhood anecdotes about reading. But he has been sprinkling breadcrumbs for years in the form of speeches, introductions for anthologies, and newspaper editorials, all of which have been compiled in the 544-page The View from the Cheap Seats.

The book is Gaiman’s first collection of nonfiction, containing everything he’s written from 1990 to the present day, from his now-famous 2012 “Make Good Art” commencement speech to text on the nature of cities from SimCity 2000. Some of the entries might’ve been better left to time, like an odd 1990 piece for Time Out about wandering London after dark that never amounts to much; we might not need two, back-to-back essays on Harlan Ellison. Yet taken as a whole, The View from the Cheap Seats is more than just an assemblage of a man’s clips; it’s Gaiman’s welcome entry into another popular genre: the writing memoir.

Stephen King’s On Writing pulls in people who would never pick up a horror novel; Elizabeth Gilbert wrote a cross between a writing memoir and a self-help book with last year’s Big Magic. It’s not a coincidence that these titles are from well-known and prolific authors, whose writing memoirs offer a rare form of intimacy. King, aside from being a master of the macabre, is an astute grammarian, as revealed by a hilarious rant against passive voice in a memoir that also explores his childhood and addiction. Gilbert may have made her name on a deeply personal memoir, but it had the consequence of making her persona larger than life; Big Magic allows her to peel back the Oprah Winfrey-approved brand to expose the diligent and occasionally frustrated writer behind it all. These books are a way for the bestselling author to remind the reader they were once like them. And even if Gaiman didn’t set out to compile a writing memoir, that’s what Seats is.

For Gaiman, the writing memoir is less about how to write and more about why we need writing. The sections are divided thematically, from music to movies to personal musings. The first is titled, “Some Things I Believe” and includes several pieces in defense of threatened literary entities: libraries, children’s literature, bookshops, and genre fiction. Most of these defenses boil down to one thing. “Somewhere out there is someone who needs that story. Someone who will grow up with a different landscape, who without that story will be a different person,” he writes in his Newbery Medal acceptance speech in this section. Even the sections devoted to things and people he loves — G.K. Chesterton, Dr. Who, comics, Tori Amos — transcend pure fandom; they are sharp analyses both of what makes the work so good and why Gaiman needed them in his life when he did. In one of the collection’s most striking pieces, Gaiman interviews Lou Reed right before a 1992 concert, asking questions about his creative process, like “So does the subject of the lyric change for you in retrospect?”

Words are inherently political to Gaiman, and writing and reading are a political act; the book features several defenses of reading as a way to teach empathy and build a better society. As this belief builds throughout the book, it’s not surprising when we come to Gaiman’s first-person account of a Syrian refugee camp in the final section. Why wouldn’t a man who has been writing for 30-some years because he believes words can facilitate change not write about one of the most pressing international humanitarian crises of our time?

This is a writing memoir about why ideas matter, and sharing this with his readers is the ultimate intimacy — building a connection that is more than a shared fantasy of a boy in a graveyard or underground London. By the end, the biographical details scattered throughout the book don’t say nearly as much about the author as do his influences, motivations, and beliefs. After all, fans fall in love with authors for the worlds they create, and by inviting readers into his own fandoms, Gaiman reminds readers he is just like them. In one sense, The View from the Cheap Seats is Gaiman’s most personal work to date.

Tess Malone is an associate editor for The Millions and an editor in Atlanta. She tweets at @temalone.

Reviews
● ●
Reviews
At the end of 'The Lonely City,' Laing does not offer up novel “answers,” either to her own loneliness or the reader’s; it’s not clear, even, whether the book feels loneliness is a problem to be solved.
Reviews
Angela Qian | 5 books mentioned 6 min read
Reviews

A few of the twentieth century Russian history books that I’ve read have touched on a detachment of Czech soldiers who were stranded in Russia after World War I. The Bolshevik Revolution soon followed and the soldiers remained stranded, thousands of miles from home. The soldiers who numbered as many as 40,000 and were stretched out along the length of the Trans-Siberian were, according to John Keegan in his history of World War I under the sway of an anti-Bolshevik officer and were “both in a position and soon in a mood to deny the use of the railway to anyone else.” In his novel, The People’s Act of Love, James Meek drops into to the town of Yazyk amongst a stranded group of these Czech soldiers. In a book of many protagonists, the point of view of Lieutenant Mutz, one of those Czech soldiers, is the most reliable. Mutz, who mostly wants to return home after years in Siberia is surrounded by a collection of eccentrics. Anna Petrovna, the woman who Mutz would like to escape with, is restive and noncommittal. Mutz’s boss Matula is a vicious young man drunk on the power he wields over the small backwater that his soldiers occupy. Yazyk is also home to mystical sect of castrati who lurk through the town like ghosts. But the catalyst for much the book’s action is Samarin, an escaped prisoner who claims he is being chased by a cannibal. Meek ably handles these characters and many others as he crafts a story that feels both otherworldly and historically accurate. The novel was longlisted for the Booker and is engagingly dense and action-filled – worthwhile for any reader but a must for anyone interested in Russian literature or history. Meek himself is not Russian. He’s British, formerly a journalist, the Guardian’s Moscow correspondent for many years.

In a genre dominated by by-the-numbers sagas of suffering and redemption, Gregoire Bouillier’s is a refreshingly odd voice. The bulk of his memoir, The Mystery Guest takes place in the space of a single day – a day in which not much happens. And yet, with its restless intelligence, The Mystery Guest manages to encompass all the thematic preoccupations of its touchstone, Mrs. Dalloway: time, fate, and the meaning of life. And unlike Ms. Woolf, Bouillier keeps us laughing.When we meet our protagonist, a failed writer and ex-boyfriend pushing middle age, the filmmaker Michel Leiris has just died. A wry depressive, Bouillier (it’s unclear how much of the book is fictionalized) is interrupted mid-eulogy by a call from his ex-girlfriend, whom he still loves.”How appropriate flashed through my mind. And on the same day Michel Leiris died […] Of course that’s what had happened: she’d heard about Michel Leiris and somehow the fact of his disappearance had made her reappear.”She invites the narrator to a birthday party for the conceptual artist Sophie Calle, who each year has a friend choose a “mystery guest.” This year, the mystery guest is to be…guess who? In the ensuing hundred pages, the narrator will fulfill his role as mystery guest, hoping for some closure with his ex-girlfriend. And of course, once at the party, he will behave like a complete ass – albeit an enlightening one.Until near the end of the book, The Mystery Guest seems content to be a sort of Gallic Woody Allen routine. Bouillier’s prose, in a supple translation by Lorin Stein, turns every interaction between the narrator and his fellow guests into a comic meditation on the impossibility of communication… And then suddenly, in a stunning reversal, Bouillier sets off the depth charges he’s quietly been planting throughout the book. In the end, we discover that The Mystery Guest isn’t a symphony of missed connections after all, but a kind of hymn to possibility. And though we’ve paid nearly 10 cents a page for the privilege of reading this slim paperback, it leaves us moved, even as we shake our heads in disbelief.”The significance of a dream,” Bouillier writes early on, “has less to do with its overt drama than with the details; a long time ago it struck me that the same was true of real life, of what passes among us for real life.” The Mystery Guest pursues this intuition until the boundaries between the imagined and the fizzle away, leaving the reader in a state of grateful intoxication.

In Memoriam Reviews
Stephanie Deutsch | 5 books mentioned 1 5 min read
● ● ●
Reviews
Unless you’re kicking it with the Compsons or Buendias, say, it usually takes a little bit of readerly patience to get through a multigenerational family story. One has to be on one’s game, in terms of care and attention. Nobody wants to spend several hundred pages with a bunch of allegorical figures sitting around the dinner table and passing each other the salt.
Reviews
Matt Hanson | 5 books mentioned 7 6 min read
● ●
Reviews