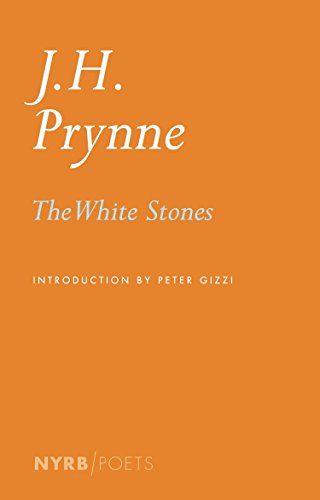 This essay is the introduction to the new NYRB Poets edition of The White Stones by J.H. Prynne.

Very few books of poetry published in England in the 20th century have the aura of J.H. Prynne’s The White Stones. The essential beauty of Prynne’s work is a quality of mind. I vividly remember reading it for the first time in 1986 and being struck by its gorgeous surface structure and energetic belief system: It is a bright element, even psychedelic at times. Hard to believe that such a book would need an introduction, a book that has been passed from poet to poet for decades. It has long been, and remains, a touchstone.

The poems of The White Stones were written between 1964 and 1968. This was a period of great activity for Prynne, a time of many and new correspondences with British and American poets, and the inaugurations of various journals, most notably the Cambridge-based The English Intelligencer, edited by the poets Andrew Crozier and Peter Riley. Prynne was a central contributor of poems, essays, and letters to The English Intelligencer, where the majority of the poems in The White Stones were first published. Thirty-six issues appeared between 1966 and 1968, serving as a laboratory for an extended group of poets purposefully creating an English countertradition. A year before the publication of The White Stones in 1969, Prynne published Kitchen Poems and Day Light Songs, the latter included in this new volume, as is the 1969 essay/prose poem “A Note on Metal.”

Now, almost 50 years on, there is a large body of discourse about Prynne’s work, but as soon as one tries to pin down the original signal of these poems it gets slippery. They refuse to be categorized: If they’re Marxist, they’re also heterodox; if they’re romantic, they’re also analytic; if they’re scientific, they’re also magical. And while Prynne’s method shares cardinal features with Charles Olson’s projective verse, the romantic philosophical inflection is closer to William Wordsworth, Friedrich Hölderlin, and late Wallace Stevens. When I first encountered Prynne’s work, I felt that there was a braiding, like a double helix, of the Pound/Olson tradition with the Romantic/Stevens tradition, of high romanticism with physical, investigative, transhistorical inquiry.

In the course of the ’60s Prynne developed deep and important friendships with some of the New American Poets, most notably Olson and Edward Dorn. In fact, after a voluminous correspondence with Olson, Prynne was responsible for preparing and editing the holographic manuscript of Olson’s Maximus IV, V, VI. No mean task. There is an edition of the Prynne/Olson letters forthcoming from the University of New Mexico Press, which will further illuminate this important correspondence between these two brilliant and original men.

For this reason, it is worth rehearsing the elegant system that Olson proposed for an emancipatory poetics in his now venerable but still deeply relevant essay “Projective Verse.” As Olson had it:

Olson further elucidates: “I am dogmatic, that the head shows in the syllable. The dance of the intellect . . .” and goes on to say, “And the threshing floor for the dance? Is it anything but the LINE?” The line in The White Stones works both the line break and in the clausal phrases that keep the machine humming and dancing from one idea to the next, one subject to the next, while constantly opening the horizon of meaning that each poem proposes. The work is full of necessary and productive restlessness in the service of discovery, you can feel the breath driving the poem.The contracted and sometimes crabbed grammar creates rhythm, but the percussive quality of the diction creates something very physical. The ending of the poem “Song in Sight of the World” is a clear example of the syncopation produced from the technique of line and comma working together to both further and interrupt meaning:

The light will do all this, to
love is the last resort, you
must know, I will tell
you, this, love, is
the world.

There is a feeling in this book that a language is coming to the speaker of the poem in the very act of composition — that is, in real time. For example, in “First Notes on Daylight” we find:

Patience is truly my device, as we wait
for the past to happen, which is to come into
the open. As I expect it to, daily. . .

These poems are faceted like crystal to daylight, or as Prynne would have it: “The striations are part of the heart’s / desire.” In many of the poems, this massing of clauses and perspectives creates an effect whereby any given singularity of personhood is defined and perhaps generated by a multiplicity of larger structural forces. In the magisterial poem “The Glacial Question, Unsolved,” the temporal structure is the geologic time and weather of the British Isles:

The falling movement, the light cloud
blowing in from the ice of Norfolk
thrust. As the dew recedes from the grass
towards noon the line of recession
slips back. We know where the north
is, the ice is an evening whiteness.
We know this, we are what it leaves:
the Pleistocene is our current sense, and
what in sentiment we are, we
are, the coast, a line or sequence, the
cut back down, to the shore.

In “Thoughts on the Esterhazy Court Uniform,” one of the most romantically charged poems in this volume, we encounter an interiority, a private meditation on the costuming of the court in which Joseph Haydn composed; we feel the pressure of composition and aesthetics within a ritualized social structure:

I walk on up the hill, in the warm
sun and we do not return, the place is
entirely musical. No person can live there
& what is similar is the deeper resource, the
now hidden purpose. I refer directly to my
own need, since to advance in the now fresh &
sprouting world must take on some musical
sense. Literally, the grace & hesitation of
modal descent, the rhyme unbearable, the
coming down through the prepared delay and
once again we are there, beholding the
complete elation of our end.

A metamorphic language is at play in these poems, where the voice is more observational than sentimental: Naming is the prerogative for knowing. In Prynne’s conception, both court systems and glaciers are players in a larger formation, they endure now in their afterlife as a lyric poem.

There is an utopian energy in The White Stones continually wheeling outward, which is why this work will never become a nostalgic object: It is constantly happening. Its readers will find binding narratives, science, economics, romantic love, history, prehistory organically deployed throughout the book’s soundscape. To dramatize this multiplicity, to make it real and active on the page is one of the standing achievements of The White Stones, the ambition of a voice enunciating scale.

This book retains a deep glamour by means of its undeniable beauty and phenomenal architecture, its intellect, its vocabularies, and its singular way to song.

Peter Gizzi is the author of several poetry collections, most recently, In Defense of Nothing: Selected Poems, 1987–2011. His honors include the Lavan Younger Poet Award from the Academy of American Poets, and artist grants from the Foundation for Contemporary Arts, the Howard Foundation, and the Guggenheim Foundation. He has served as the poetry editor for The Nation and as founding editor of o·ble¯k: a journal of language arts. He teaches at the University of Massachusetts, Amherst.

Book Previews On Poetry
On Poetry
I'm a rank amateur, but when I read the Boston Globe’s dismissal of Tranströmer as “an elderly Swedish poet virtually unknown outside his homeland,” it felt necessary to speak up with the voice of an amateur.
On Poetry
Steve Himmer | 4 books mentioned 4 6 min read
● ●
On Poetry The Millions Interview
● ●
On Poetry