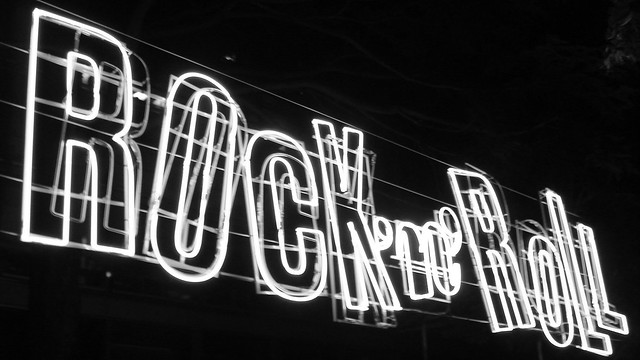 My wife carries the distinction of being, among many other things, the world’s most ardent fan of the southern California folk-rock band Dawes. If they’re playing a show within 100 miles of our home, she will unquestionably be there; when they announce the release of a new recording, she pre-orders it as soon as she can. And if they offer a book club — in which, every other month, a member of Dawes sends out a paperback, along with an explanation of why he chose that book — she will become a member, excessive cost be damned. Since she joined in August, we’ve received three Dawes-approved titles: Italo Calvino’s If on a Winter’s Night a Traveler, Ken Kesey’s Sometimes a Great Notion, and, most recently, Henry Miller’s Big Sur and the Oranges of Hieronymus Bosch. “[Miller] leans heavily on some of the pre-existing tenets of eastern religion,” drummer Griffin Goldsmith writes in his “Dawes Book Report,” “particularly the idea that an individual’s happiness is not only contingent upon where they are in the world, but also upon a confluence of internal emotions.”

To put it mildly, such knottiness is not what my wife expected from her fluffy-haired purveyors of golden-hued singalongs. (And I can’t really blame her; in college, I abandoned Sometimes a Great Notion after 15 flummoxing, headache-inducing pages.) All I can do is clear out shelf space for her new and difficult books — and suggest, politely, that she join one of the following competing rock ‘n’ roll reading clubs, which, of course, include their own book reports.

Ozzy Osbourne: Of Mice and Men

So, Of Mice and Men, it’s got this big dumb wanker, Christ, I can’t remember his name — wait, wait, it’s Denny, no, Lenny, that’s it — and his mate, this teensy little shitter, George. This George fellow is like the Oates to Lenny’s Hall, if that makes any sense. I don’t think it does. Fucking “Maneater,” innit. Anyway, they’re all kinda walking around and what, like, camping? And the big one, he’s always killing the animals ‘cos he’s so fucking big. Like, you ever see that guy, whatsit, Joey Ramone? I met him once in Boston, or like Tokyo? He was fuckin’ huge, and that’s who I kept thinking of when I was reading this book. At the end of the book, the guy from the Ramones kills this kind of hooker-type bird in a barn, and that was pretty much that. Christ, I don’t know what this book was on about.

Twilight is a book about a girl who falls in love with a boy who, I’ll tell you right now, just happens to be a vampire. Life is funny like that sometimes. But this girl, her name is Bella. And she can’t do anything about this love of hers; she just can’t put it through. Some hoodoo about magic powers, is what I’m gathering. Young love is like that, I’ve found — untrustworthy at its heart and cold where it shouldn’t be. The book asks a certain kind of question, one that the wise men have been wrestling since the days of Plato, since the days of Little Richard, banging out his mystic sounds: is true love possible? And if not, how about vampire love? Now, I don’t know if it is or not, since I never was able to finish the book. I couldn’t make hide nor hair of it, to be honest on all fronts. It’s really long — longer than the mighty Mississippi, where you can hear that steam whistle blow, far off into the night. Out beyond them sycamore trees standing out in the dark. A sound to scare the vampires, if there are any vampires around to scare.

Maybe you weren’t expecting Bret Easton Ellis’s American Psycho to be the first selection of my book club. Jimmy, I hear you plead, you’re the bard of the beachfront, the Wordsworth of the waves. You once released an album called License to Chill; you write songs about delicious cheeseburgers. Why kick things off with a harrowing, full-bore descent into the savage, blood-spattered heart of our long-dead modern dream? Why confront us with this jagged, debauched journey into a pornographic, torturous vision? Why not give us something easy, something by Carl Hiaasen or, you know, Dave Barry — or better yet, one of your own books, like the lounge-chair-ready A Salty Piece of Land or Where is Joe Merchant?

My response is this, my faithful Parrotheads: beneath every placid exterior lies a festering, maggot-ridden core, a hellish pit of snakes and raw-boned, scalding pain. Stare into those waves lapping gently against the shore long enough, and soon enough you’ll see the nihilism in their relentless pounding; that water at your sunburned feet should remind us all of the steady encroachment of death.

Anyway, where was I? Oh, yes — I hope you dig the book! Up next after this one: The Lincoln Lawyer, by Michael Connelly!

Hey, Maroon 5 Book Clubbers! This month’s super-cool novel is James Joyce’s Ulysses, which is hugely important to me, and not just because it’s the most prominent landmark in modernist literature — or that in 1998 the Modern Library named it the best English-language novel of the 20th Century! I chose Ulysses because it’s a work in which life’s complexities are depicted with unprecedented, and unequalled, linguistic and stylistic virtuosity. (Seriously, guys, it is!) But that’s not all: in its characters we see, according to some lex eterna, an ineluctable condition of their very existence! Isn’t that rad? All right now, Fivers, get to it — I hope you love it as much as I did! ‘Cause I totally read it — and other books, too! I didn’t just have my assistant cut and paste lines from Wikipedia to make it seem like I had read Joyce’s sublime masterpiece, which, I have to say, depicts life’s complexities with unprecedented, and unequalled, linguistic and stylistic virtuosity!

Epitaphs for the Novel
In Everlasting Memory of The Novel (1605 – 2014)
Wandering knight, Shipwreck survivor, Whale hunter, Homebody
*
The Novel (1719 – 2014)
Into the Great Omniscience
*
In Remembrance of The Novel (d. 2014)
Who after supplanting the Epic
Enduring that “damned mob of scribbling women”
And surviving Finnegans Wake
Finally succumbed to the Internet
*
The Novel (RIP)
“I couldn’t relate to you either.”
*
Here lies The Novel (1000 – 2014)
Multilingual polymath, Baggy monster, Repeat Booker Prize Winner
*
The Novel that is born of other narrative modes hath but a short time to live, and is full of misery. It cometh up and is cut down, like the tree from which it was made.
*
Cherished Memories of The Novel (d. 2014)
“The most spectacular implosion of any genre you’re likely to see this year.”
— Gary Shteyngart
*
May your next chapter be free of critics and unhappy families
May you haunt those readers who left you unfinished
May you at last have time to read the Russians
And catch up on House of Cards
*
The Novel (1455 – 2014)
“I had a great print run.”
*
“I weep for the Novel — he is dead!”
Loving son of Calliope, faithful husband of Clio, devoted father of the nouveau roman, stream of consciousness
and movie tie-ins
*
Here lies, within this narrow pit,
A novel, the last one ever writ.
Disturb not its pages free of crease,
Lest you come to read in peace.