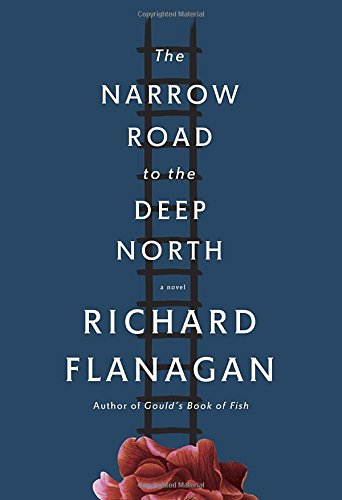 The way historical fiction works is by using some basic recognizable details to situate the reader in a time and place (the historical part), and then to imagine the rest, in order to make a narrative (the fiction part). Richard Flanagan’s The Narrow Road to the Deep North is a fictional account of a historical event — the experiences of Australian soldiers in a Japanese prisoner of war camp on the Thai Burma Death Railway, also known as The Line, in 1943. A plan by the Imperial Japanese Army to speedily construct a railway between Bangkok and Burma, they used, among others, tens of thousands of Allied prisoners of war. One of them was Arch Flanagan, the father of Richard, to whom The Narrow Road to the Deep North is dedicated: “prisoner san byaku san ju go (335).” The prisoners were starved and abused, thousands died.

The imagined details of this book: Dorrigo Evans is a doctor and a colonel of the Australian soldiers in the camp. He is handsome, intelligent, a natural leader, irresistible to every person around him, even his captors. All of his weaknesses come from how good he is, how virtuous: “The more he was accused of virtue as he grew older, the more he hated it. Virtue was vanity dressed up and waiting for applause.” In the camp, the Australian soldiers die off as they are beaten and starved to death by the rank of brutally efficient Japanese commanders, who themselves have been driven mad by the conditions under which they live. The Japanese see the Australians as useless — oversized, stupid, and lazy — and are annoyed by their constant singing and joking. The Australians see the Japanese as slave drivers, demented by their devotion to the abstraction that is the Emperor.  Both believe that the other is morally corrupt in some way. In the vacuum that follows the end of the war, however, all moral reasoning that made sense at the time becomes unfamiliar. The war ends, and everyone who survives tries to fold themselves into the compromise of normal life. There is an epigraph is from Paul Celan, which speaks of the horror of returning to life after deep, specific suffering — “Mother, they write poems.”

Outside of the camp, the most important story is Dorrigo’s love affair before the war, with his uncle’s wife Amy, which took place in a hotel pub in Adelaide. The love affair is stopped by the war, but its memory and the sadness of its failed connection stays around, forming a Shakespearean subplot. The primary subject of this book is human suffering, and all the endlessly interesting ways in which people cause themselves and others to suffer. The strange euphemism “Prisoner of War” eventually comes to describe every character in the book.

The title comes from the travel journal of Basho, the Edo poet. Basho took a long solitary journey north, questioning, in his journal, whether life has any meaning at all. The question of meaning, and whether or not it can be extracted through the study of history, has preoccupied writers of historical fiction over the past fifty years. Authors such as Peter Carey, Laurent Binet, Salman Rushdie, and E.L. Doctorow, have felt the need to meta-theorize or “postmodernize” the re-creation of the past, to question the writing of history and the usefulness of fiction even as they do it. They are preoccupied by the need to tell the difference between the real (unattainable), the true (mostly nonexistent), and the told (unreliable). The conclusion, insofar as there is one, is that meaning and memory are slippery surfaces across which we can only slide.

Part of the problem of meaning, for what might be called the postmodern or “meta” writers of history and historical fiction, is plausibility. That is, the reader being able to believe what they are reading is “true,” (true, in this sense, meaning that it really happened). Emmanuel Le Roy Ladurie, the French historian who founded the movement of “New History,” began in the 1970s to write history using the first person “I” pronoun, as a way of moving history from story to discourse, and signaling to his readers that they would never read history that hadn’t been written by a human, and therefore wasn’t subject to being falsified by a human imagination. Data are unable to speak for themselves, intervention is needed. History becomes fiction, in this view, because it is narrative. Flanagan presents an opposite pole to this view. This book is historical in every sense; it could almost have been written at the time of its setting, in the 1940s, before the parsing of the horror of the Second World War caused us to reorient our worldview in almost every sphere of life, and to question the very possibility of meaning.

The difference between history and fiction, Sir Philip Sidney argued, in his A Defense of Poetry (c.1579), is not what did happen, but what could. It was a rebuttal to those who were suspicious of the power of fiction, from Plato to the Puritans:

Only the poet, disdaining to be tied to any such subjection, lifted up with the vigor of his own invention, doth grow in effect another nature, in making things either better than nature bringeth forth, or, quite anew, forms such as never were in nature.

The imagination required to write fiction, in Sidney’s line of argument, is not gnosis but praxis, and becomes an empathetic force, a virtue. Fiction is “true” not in a historical sense, but in a moral one, exactly because of its inventive power. Fiction, unlike history or philosophy, can create a world that didn’t previously exist, out of the one that does.

Description is where the story is, and also where the postmodern complaint with the story is. It’s where the poetry of the writing is. Those writers of literary historical fiction over the past forty or fifty years who have become fed up with traditional, novelistic historical storytelling have often revived the Platonic quarrel with poetry, in questioning of the usefulness of that leap to fiction. Description, though, is what Flanagan revels in. He is a storyteller in the mythic sense, of lives determined by emotion, error, and turns of coincidence and fate. This book goes from one end of a life to other, with an epic journey and a romantic tragedy in the middle (there are many references to Ulysses; Dorrigo’s life continually marked with poetry). The plot is driven by suffering and desire. Destiny of the characters is the number and nature of words spoken (One of Dorrigo Evans’s tasks is to choose which soldiers get sent on the march and which stay behind, essentially, which ones will stay alive and which won’t, an echo of the Judenräte).

Haiku poetry, the great poetic forms of restraint, is interspersed throughout the chapters, highlighting the overflowing quality of Flanagan’s sentences. His sentences are poetic, even if they lack the precision and control of the poetry that intersects the chapters:

The noise of the monsoonal rain flogging the canvas roof of the long, A-framed shelter — bamboo-strutted and open-walled — meant Darky Gardiner could hardly hear himself. The clamor of the rain made such nights only more desolate, worse, in a way, than the days when he was just trying to survive but at least had company to do it with. The jungle shuddering in sheets of noise, the incessant drumming of mud churning as the rain slammed into it, the strange slaps and punches of invisible water runs, all of it he found dismal.

There is an amputation scene that the squeamish will have to divide up and read in shifts, taking breaks in between to hold the open book aside, turn their faces away and gasp for air. It’s all part of the stinking sensuality of Flanagan’s writing. It isn’t enough to be told the story. We sit through it, like a cinema for smell and touch.

His language is ornate:

Dorrigo would sway back and forth and imagine himself shaping into one of the boughs of the wildly snaking peppermint gums that fingered and flew through the great blue sky overhead…he would drink in the birdsong of the wrens and the honeyeaters, the whip-crack call of the jo-wittys, punctuated by Gracie’s steady clop, and the creak and clink of the cart’s leather traces and wood shafts and iron chains, a universe of sensation that returned in dreams.

His dialogue can be dramatic, almost to the point of seeming parodic:

She took a puff, put the cigarette in the ashtray and stared at it. Without looking up, she said, But do you believe in love, Mr Evans?

She rolled the cigarette end around in the ashtray.

Yet even when his writing cloys, it still feels sincere, in its faith in the redemptive power of art after tragedy.

Flanagan seems to be at heart a novelist, without interest in questioning the utility of historical fiction, only in using it to create fiction; using one experience to make another. In history, other than narrative, all we have are statistics, and the leap required to get from statistics to history is one of imagination. That leap is where Flanagan lives, as a writer.  Belief, as Flanagan shows us, comes not just from accuracy, but from the power of the writing itself. “A poem is not a law, Sir” a soldier tells Dorrigo, known in the camp as Big Fella. “But he realized with a shock it more or less was.” In Flanagan’s books, story becomes true by being poetry. The truth in this book is not that of the historical sense, but in a Keatsian, moral sense. We don’t read historical novels like War and Peace to find out about the French influence in Russia, but for the very pleasure of exercising the imagination — for their virtue.

There is an endearing overabundance of almost everything in this book, which in its enthusiasm, becomes part of the pleasure, though some faith is needed to get through some of the love scenes, and to travel along with the humorless, masculine sentimentality of the hero. Readers of this book should do away with all suspicions, and get ready for an avalanche of feeling and sincerity, or else risk living in the sad restraint of Flanagan’s characters.